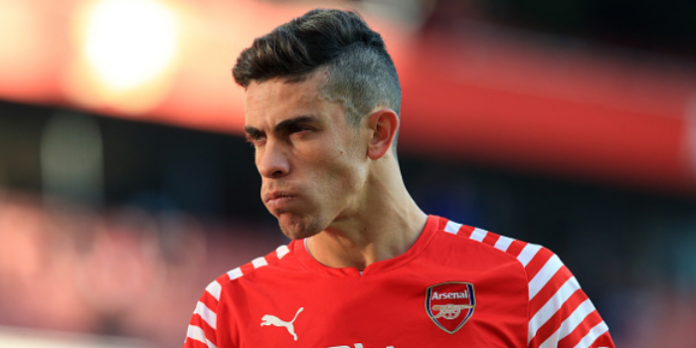 New boy Gabriel says he was surprised and elated by his first call-up to the Brazilian national team as Dunga’s side get ready for friendly games with France and Chile.

The 24-year-old has looked comfortable in five appearances for the Gunners since his January transfer from Villarreal and could further consolidate his burgeoning credentials in Europe with a debut for his country during the Interlull.

Speaking to the Brazilian Football Federation’s official website, the defender said: “It’s a great surprise, one of the happiest moments of my life.

“Every player from the moment they start playing football wants to get the call and to represent the Seleção.

“It’s a sign that my matches are being watch, which is good and it stimulates me even more to continue playing well for Arsenal.”

Arsenal has of course had its fair share of Brazilians during the Arsene Wenger era with Gilberto earning iconic status for his exploits with the ‘Invincibles’ and others like Sylvinho, Edu and Eduardo* all enjoying cult status.

Reflecting on the strong ties between N5 and Brazil, Gabriel continued: “They are very fond of Brazilian players. I am very happy to be more representating my country at a club with as much tradition as Arsenal.”

Brazil take on France at the Stade de France on Thursday – a match before which ex-Gunners Thierry Henry and Patrick Vieira will have their international careers honoured – and then face Alexis Sanchez’s Chile at the Emirates on Sunday. Tickets for the latter are still available.

*Yeah, we know he played for Croatia, but he was born in Brazil.

Am loving Gabriel. Reminds me of Kos-boss. As somebody already said earlier, whatever you do, please dont harm Alexis. Actually slap any other brazillian hard in the face if they try. My personal favourite would be Oscar

Why am I so fascinated by his teeth/jaw. Literally can’t help myself double taking every time I see him.

With such a stare I doubt strikers will relish getting stampy with him; especially Brazilian turncoats in blue…

I thought Eduardo was Crozilian?

What continent is that in?
I can’t find in in my old atlas, is it near Burma or Ceylon?

Its near burned woods!

It’s where Spurms play on Thursday nights, if they’re lucky.

Looking foward to that France Brazil match,anyone know where to watch on TV or will I have to stream

You forgot about Andre Santos! How could you forget about ‘larger than life’ Santos!?

…I’m almost sorry for reminding everyone about him actually.

Or Julio Baptiste and 4 goals at anfield – the beast

Julio Baptista – 4 goals at Anfield and… um… nothing else.

Yeah, Santos was about as cult as you can get. A very strange player. Good on his day, terrible otherwise.

I got the shock of a lifetime when i switched on tv the other week and saw santos playing in the indian super league. Hes now playing attacking midfield hahahaha

Andre is doing great ! I know because i followed him on instagram.

Being at arsenal gets you noticed. Either that or brazil needs new defenders, not sure which.

Any team that plays David Luiz as a defender is desperate for a real defender!

That must have been before the home crowd whingers got on his back, which affected his confidence so he stopped looking forward.

Ah yes, who could forget “The Crab”. It wasn’t even the sideways passes that bothered me so much, it was how lazy he was with tracking back when we lost the ball. He was like the anti-Coq. I still remember his absolute belter against Everton on the first day of the season though. His celebration was very Brazilian. He had a great game that day, we absolutely smashed them 6-1 and I was convinced we were going to win the league… that was 2009/10. We finished 3rd, I think. Additionally we bought Samuel Galindo that winter. He’s still never played… Read more »

That’s why he faded away into Bolivian.

I know he’s Bolivian. It was just an aside.
A Brazilian who has never played for us though, obviously, would be Wellington Silva. I had high hopes for that kid.

That was a great goal and celebration against Everton, but I don’t recall much else of note that he did for us.

This guy is a beast. He also seems to have more upper body strength than Kos and he also seems to be street smart unlike Kos and Mert who can be a bit naive at times.
AW has struck Gold for sure.

Yep, up there with Obama’s Nobel.

Brain is a Gunner4life!

For once, we’ve got a sweeper defender who is fast, athletic, precise in his tackles, strong in the air, gets stuck in, intimidating face, doesn’t smile… And above all, looks scary. *Costa! Gab’ is waiting for ya! You moron!…

overmars
Reply to  Brain is a Gunner4life!

Been desperate for a defender like him for a while.

I hope so, I have a dream to enter the emirates and see my team play live. That dream is fucking expensive.

I’m loving Gabriel already. He’s not your average Brazilian player is he? He’s got a bit of the Martin Keown about him. All action, quite pacey.
On the topic of Centre Backs I just saw that Skrtel is getting done for his stamp on De Gea which means both him and Gerrard are missing against us. Seeing as Skrtel seems to be a perennial pain in the arse for us from corners this is great news.

We will miss Squirtle’s own goals though.

….He looks mean and scary….he looks lyk the kinda guy dat makes u pee in ya pants when you meet him walking towards you in a dark quiet alley…

And some English words.

Gabs looks a lot like Jacques Brel. Who can’t be beat.

You’d pee in your pants if you met me in a dark alley and you address me in that pathetic excuse of an English dialect. Or whatever language it is

I thought he did alright but there is a degree of anxiousness to do well in his game which makes me nervous. Its as if (like Koscielny first season) he is trying too hard and a disaster seems always around the corner (penalty or OG)

Hope he relaxes a little. The capability is clearly there but he needs a bit of composure at the back.

He’ll be better when his English improves and he starts playing as part of a defensive unit, but until then he’s playing as though he’s on his own and mustn’t make a mistake.

It is nice to hear of the brazilian footie players who played and represented arsenal fc especially gilberto, edu two seasons ago we also had a young brazilian right defender he was at gunners a short time but gabriel cab impress.

It is nice to hear of the brazilian footie players who played and represented arsenal fc especially gilberto, edu two seasons ago we also had a young brazilian right defender he was at gunners a short time but gabriel can impress.

Brazil-Chile is sold out now.