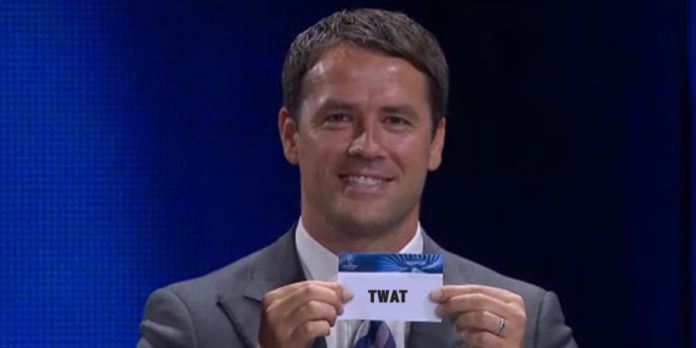 You might remember that a couple of weeks ago Michael Owen – former football and now full time dipshit for BT Sport – said that he thought Raheem Sterling was a better player than Mesut Ozil.

And hey, we’ve all said some stupid things in our time, but when we do most of us like to just let it lie. We certainly don’t double-down and repeat those ridiculous things, but Owen did just that, stating yet again just yesterday that Sterling was a better footballer than the German.

Shockingly though, it’s not just Sterling he thinks is better than Ozil. An insider found a sheet of paper in the bin at the BT studios and sent it to us. It’s a list of things that Michael Owen thinks are better than Mesut Ozil, he had it at the ready to back up his ludicrous guff, and it’s reproduced for you here.

Definitely not music or films though

How about an article entitled things I think are better than Michael Owen ? 1)everything even irritating objects stuck inside my left nostril
Except John Terry and Samir Na$ri. They’re lower than a snake’s belly and dirtier than a penguin’s chuff.

How the hell did they get up your left nostril you poor soul? Both of them?

“I think Ozil is a very good player but it’s ironic, we were talking about a crisis at Arsenal only a few months ago and they were struggling around fourth or fifth saying ‘are they going to get into the top 4?’ knocked out the Champions League, hanging on in the FA Cup. “All of a sudden it looks like they are going to win the FA Cup now, looks like they are going to come second in the league and it will be a decent season for Arsenal, a very good season for Arsenal. It’s amazing how the game… Read more »

Bloggs you are a mad man. Andrea Dossena? Where did that come from? You genius.

Not to dampen the joke or anything but Andrea is in fact a unisex name, it’s common for both boys and girls in Italy e.g. Andrea Pirlo.

you cast your pearls at swine bloggs…

Gunner From Another Mother
Reply to  arseblog

Shrek, Shrek 2…That one induced uncontrollable laughter. This whole thing was fantastic

Woolwich Peripatetic
Reply to  Gunner From Another Mother

I’m literally crying with laughter at “Shrek, Shrek 2 and Requiem for a Dream”.

Arsene's Zip
Reply to  Gunner From Another Mother

My favourite film of all time is Avatar 2.

You could probably add Andrea Pirlo to the list of players Owen thinks Sterling is better than.

Shirley the joke is that Owen doesn’t know that?

Hehe genius as always – some reference’s I don’t get – eg. Hands Free Car Kits? Or is just blogs on a trip? 🙂

Well as long as Michael Owen stays away there won’t be any cunts either.

Top “curb your enthusiasm” quote. Three or even four thumbs up

Why does he feel the need to compare them in any case? Only a clueless twat would start this debate about players that are totally different. It’s like comparing Mesut with Djimi Traore. This started by discussing who’s place he would take in our team…yeah pop sterling at no.10? Absolute cunt

I’m sure he wouldn’t enjoy said picnics if he wasn’t allowed in.

I am also a fan of hores.

Exiledgooner
Reply to  AN other

Given how he pushed hard for a move away from Liverpool and then later joined their arch rivals, I can’t help but wonder why he persists with his Scouse bias. I’m pretty confident that most of them don’t reciprocate.

thats because he is a twat….just like the picture says!

Ozil. Owen. One of them’s been nicking a living since 2013, and I think we all know which one.

He scored a good goal for England and the rest was shitstory!

best comment! Also Owen’s voice is not an accent anyone should have to listen to.

Blogs, making good use of the Office Lens app?

‘Click to embiggen’? Embiggen? It’s a perfectly cromulent word to use I guess.

Questioning the cromulence of the word ’embiggen’? You, sir, are banned, along with your children and your children’s children.

That would have worked better if my previous comment had actually posted. Bloody internets…

Owen goes a bit weak on the knees always.pls forgive him !

Fucking genius mate… love it.. and i begining to despise this Owen guy each time he open his foul yap. . .

I was wondering if he would have the opinion if we sign Sterling in the next transfer window. .

It’s even the third time he said it as after the Liverpool game he tweeted he was repeating his thought (if im not mistaken). LOL

“Reqiuem for a Dream”? Perfect!

Is it a good thing that I don’t know about this “Requiem for a Dream” thing? Too bored (scared) to look up for it on the internets…. 🙂

Its a movie about drug addiction pretty intense

Michael Owen has a fantasy of him and Raheem Sterling doing Shisha under a tree every night. He’s hoping this is the only way to get Sterling to agree to it. Peculiar i know, but Michael Owen doesn’t doesn’t care

It was Michael’s dream to play for Real Madrid. Where he plopped.

Having a picnic with your does suck though. Gotta give him that.

Thought he would have had the Real Madrid or Newcastle treatment room written down. He must have forgot them.

I think Michael Owen is Mesut Ozil in disguise. Just think about. Not only are both of their initials M.O., but it would make sense for Mesut to want to divert attention from himself, and keep on playing as well as he has been these months. What can I say? Keep it up.

But Mesut’s not a twat.

Of course not, he’s just playing a part. All for the good of the team 😀

You make a good point.. I’ve never seen them in the same room.

I would hope that if they were, Ozil would dropkick him. All the while screaming “YaMesutYa”.

I think Owen only aims at Arsenal when he pretents to know football, is because we react. It is going to be headlines and gooners will fluid it with comments. He cannot really criticize Pool and MANU since he is been there. For Chelski and Shitti well, it is boring when you call someone stupid if he or she is really stupid, isnt it. So recently when some stupid magazine or website or wannabe commentator critisize Arsenal or players, I just think “oh one more attention whore”

Exactly, one thing we arsenal fans are definitely guilty of is being easy to wind up. We’ve got one of the largest and most vocal online fan bases, and any article criticising our players is guaranteed to get hits, comments and advertising revenue. In the famous words of the internet, don’t feed the trolls.

He really is stupid… extremely… Moronic even…

The man peaked at 17, downhill since then

I would most definitely bop him one on the hooter also

Who can forget this, the boy’s a natural.. https://www.youtube.com/watch?v=uD-LjX_K9Cg

Love that. “This is no ordinary chopper” – talking about the helicopter right?

I think Owen was one of those babies discarded at the start of 300..

What’s worse than being a c*nt?

– Being a noisy c*nt, which is probably the worst type of c*nt

being a twat!…..worse than being a cunt imo

AFCVT
Reply to  The Only Olivier is Giroud

It’s sad how owen’s brain is on the wane so quickly in his early 40s just like his footballing career after 18!

Ozil is the kind of player that does a lot of small things damn good. And as the months roll by and this squad solidify’s itself I can only see him providing more and more of the non flamboyant Vorsprung durch Technik football which is his style.

Had he been criticized by a true legend I’d bat an eye lid. Ohwine is definitely nothing of the sort.

Until then I only pay attention to us vs chelski and you guessed it, stocking more beer. And rum. That Caribbean rum. That makes you smell all manly the next day.

no one has ever been paid so much to do so little as michael owen, just ask newcastle. that being said, requiem for a dream probably is better than ozil.

Who wouldn’t want the old man-eating bears of Blogs let loose on this Owen twat??
A blunt cutlass chop his lips for good measure..

Maybe Sterling is putting him up to this. i mean he got liverpool to raise his wages by a staggering £70k and still told them to fuck off when it was placed on the table.

I particularly like the use of the word “dipshit”…

This is a boring topic. Everybody knows that Michael Owen is a charmless, not-too-bright, biased Liverpool fan who probably thinks that Robbie Savage is smarter than Stephen Hawking. The whole Rahim Steerling situation can be summed up in one sentence: A greedy fool who’s going to ruin his career. I’m looking forward to the two Champions’ League ties tonight. Barca are through but will probably punish PSG with more brilliant football. But can Bayern come back from 3-1 down? I think they can: I’m going for a 2-0 win for the German side, which will see them just sneak through.… Read more »

You have to ruin it at the end Fats…!

I sincerely hope that calling Michael Owen a “former football” was intentional and not a typo. Because that made my day.

Thank u Arseblog, u cheered me up a bit!! This ISIS terrorist groups beheaded my Ethiopian people( Zelalem’s country by birth, incase u want to relate) and I was really down this two days.

Michael Owen is a twat.

Required reading for all Gooners;
http://www.theguardian.com/football/2015/apr/21/arsene-wenger-arsenal-the-martyr-of-islington