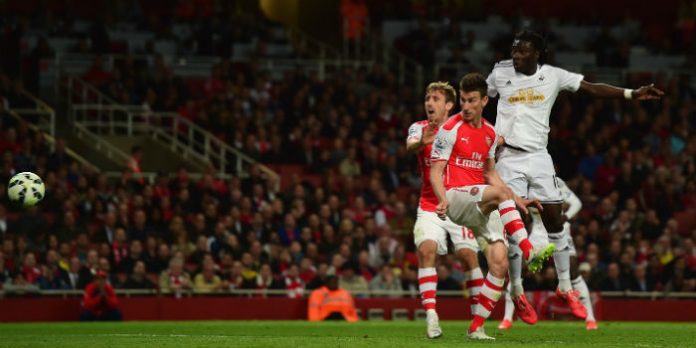 As the full-time whistle went at the Emirates last night Alexis Sanchez, unable to hide his disgust, raced down the tunnel like he was eager to beat the queue for the Piccadilly Line.

Losing never gets easy, even when you’ve not experienced it since late February.

Elsewhere Jack Wilshere and Per Mertesacker hung around to applaud the crowd, but they looked similarly frustrated. Later, still shell-shocked by Swansea’s late smash-and-grab, they faced the media and couldn’t hide their disappointment.

“We tried everything to get in front, to get an opener,” Mertesacker told Arsenal Player. “That would have been lovely and have made it so much easier for us.

“But it didn’t happen and [shows] how brutal football is. All of a sudden they score out of nothing so yeah, one of those nights.

“I think we were patient over the 90 minutes. You could see in the second half that we were nearly there. We had the chances, we created more and more and we put them under massive pressure.

“It’s a disappointing night for us but we’ll keep going because we believe in ourselves and that’s what made us strong in the last couple of weeks. That was a big punishment for us here but we are still in a good mood and I’m convinced that we’ll bounce back very quickly.”

Lamenting the end of a 10-game winning streak Wilshere, who last night made his 150th appearance for the club, added:

“We dominated the first half but at the end of the day the only thing that matters is the result. We created chances and I thought Fabianski was brilliant tonight. We fell asleep for two minutes and at this level you can’t do that.

“We didn’t want it [the run] to come to an end at all, but especially at home when we felt like we dominated the game. It’s tough to take but when you dominate a game like that you should be winning it, but we switched off at the end for a minute and got punished. You get punished at this level and we did.”

Both men also reserved praise for Lukasz Fabianski, who was universally voted man-of-the-match after a 90-minute display of perfect handling.

“I thought Fabianski was brilliant,” said Wilshere. “In the second half we did create a few chances that we should be scoring but Fabianski was there and he’s been fantastic for them this year.

“I’m happy for him – he’s been my friend for a good number of years while we were at Arsenal. He’s grown as a player and seems to be growing as a person as well, and I’m happy for him.”

Mertesacker was similarly magnanimous concluding: “He was a good team-mate and will always be so it was a good night for him but frustrating for us. We gave him the opportunity to make good saves.

“I think there were plenty of chances where we could have done better in front of goal to give him no chance. He had a good today but we didn’t execute as well as we normally do.”

One of those nights is exactly right. Losses happen, Swansea are a good side and that’s just how it goes sometimes. It doesn’t mean all the reasons to be excited and optimistic about next season and beyond are suddenly not true anymore.

Second would be nice I guess but personally I only care about at least third to avoid a Champions League playoff, and the Man United match is huge in that regard. Win and we clinch it, draw and we only need one point more, lose and we have to win the final two to be guaranteed third.

Its not “one” of those nights is it. We have far more than “One” of these games a season and if we’re going to win the league we need to really only have ONE of these nights a season!!

One of “those” nights, i.e. plural., in other words one of them.

We had those nights too often in the first half of the season, but at the moment we’re not having them too often. Also, this wasn’t anywhere near as bad as the first Swansea game, when we threw away a lead. Not managing to get a goal can happen, and while conceding one on the break when you dominate shouldn’t happen, it’s not as if we’d really thrown caution to the wind, we were just unlucky. As far as I’m concerned The only really worrisome game since Christmas was Monaco, as we threw that one away by trying to win… Read more »

Yes, Monaco was the worst of the worryingly large number of ‘one of those nights’. ‘We fell asleep for two minutes and at this level you can’t do that,’ Merte explains. Like it’s a radical new concept that staying awake for 90 minutes once a week is something that he might be expected to do. OK, meaningless post-match platitudes are normal and a serious analysis of what went wrong and why is probably too much to expect. But I still find it troubling that this team after a defeat can admit to not giving their all. ‘We took them too… Read more »

Ok. Own up. Which fucker found that handbrake?

remember the invincibles
Reply to  Redside

Yeah I’m sure Villa, or any other team, had never thought of defending and looking for chances to counter attack before Swansea introduced this revolutionary tactic last night. Surely they were going to line up with three centre forwards on the pitch before Gary Monk set them straight last night.

As much as I’d love us to win our remaining games and grab that second spot, maybe a slightly more reserved approach to the game against united would be a good idea. A draw is good enough to effectively secure at least third, and avoid that annoying champions league qualification game. Not to mention the fact that van Gaal’s smug face in the post match interview would be unbearable…

The nice thing is that United, in front of a home crowd, will have to try to go for it. Our defence + Coq can deal with their attack, and we’ll actually have some space to play in. I’d almost rather play United than Villa right now.

Doing a double in OT should be enough motivation for the boys to pick themselves up. COYG

I actually think that walcott wasn’t as bad as people make him out to be. He made a good effort to hold the ball out and lay it off to other players.

That’s what I thought too. Giroud didn’t see the ball much either because they had triple cover on the striker. Only 7 touches, but 2 on target is not bad at all from it.

But in the last minutes chasing a game, size in the box would have been useful. Should have had both on, Bellerin sit back more and mark the guy that killed us last time.

All our attempts simply went straight at Fabianski.

Very frustrating, feels like 3 steps backwards after a great spell. I really wanted second place, we probably need three wins now and even that won’t guarantee us. Hope they can get really motivated for OT, sit back for as long as needed and then attack. I don’t want them doing a double over us in the league as well as Swansea.

one of those nights….definitely!…best forgotten

Fucking smashed and grabbbed…..twice!….by same team?…would have been ironicaly comical, if not that it hurts so much

This is not the first time Wenger has lost to a team playing anti soccer.You will recall the cl games against Chelsea and Mu where he was perpetually beaten.Arsenal will attack and leave gaps behind . Ronaldo and Droba scored tons of goals . Why?Wenger is blinded by possession and attacking soccer .Countless passes are made before a shot is made.He is naïve tactically and me thinks Arsenal can probably finish 3rd/4th. As for the cl,he is there to make up the nos.Sometime ago he said if Arsenal did not have so many injuries,he would have been challenging for the… Read more »

Seems to have worked quite well for the last 10 games. It’s almost like you’re overreacting….

“me thinks Arsenal can probably finish 3rd/4th” that’s an amazing prediction, especially when you consider Liverpool, who are in 5th, can’t actually catch us…..

I don’t remember seeing you on here about Wenger’s tactial naivety while we were in our unbeaten run, seems hyperbole is the new cool. As we are guarantee’d 4th, which considering the last few years has happened on the last day of the season, maybe you need to calm the fuck down and realise at least 3rd is very much in our own hands.

In regards to Fabianski – not sure if it was caught on TV, but I was at the Emirates and he got clapped off the field by all of us lot who stuck around till the whistle.

Parking the bus worked well for them. Thank god Arsenal will never do that. Ever. Not with AW at the helm

A draw would have been OK, but with taking the Coq off we cocked it up.