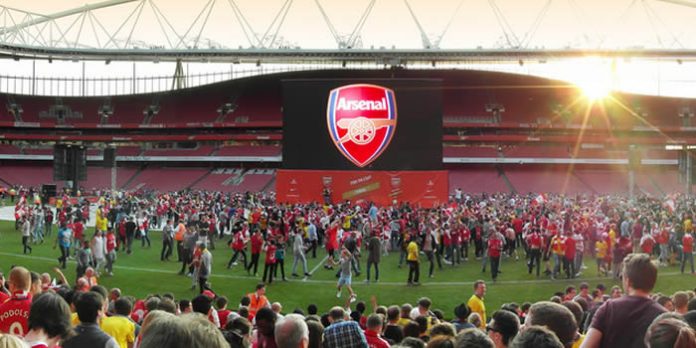 Arsenal have announced that the FA Cup final, like last season, will be screened inside the Emirates Stadium for Arsenal members.

In a statement on the official website, they say, “The FA Cup final against Aston Villa will be screened live exclusively for Arsenal Members on Saturday, May 30.

“The match will be shown on giant screens inside Emirates Stadium with fans able to watch the game from the upper and lower tiers, as well as from Club Level.

“After the success of last year’s event, the capacity for the event will be increased to 40,000, making it the next best place to watch the match outside of Wembley Stadium.

“Ticket prices will remain the same as last year’s event, priced £10 for Club Level, £5 for adults and £3 for concessions.”

Details of ticket availability will be announced soon via Arsenal.com

By all accounts it was good fun last season, although the screens were turned off after jubilant fans invaded the pitch after the 3-2 win over Hull.

Let’s hope for similar jubilation this time around.

I know where I’m going to be… We’re the famous Arsenal and we’re going to Wembley!!!

I went last year, it was amazing, to come back from 2-0 to win 3-2.
We danced in the streets to the sound of the car horns, whilst getting drunk.
We ended up in the Tollington and to mark the fantastic occasion, I bought Arseblogs book!

Me too! It was fuckin excellent!

I say have szczesny on the pitch at the emirates may 30th.

Just what are you smokin’ gunner? (couldn’t resist)

Gandalf the Gooner
Reply to  smokin'gunner

What would I give to be at this screening … 🙁

That git Burley on the ESPNsuckernet website. Someone needs to take him to task. What a twit. No point playing well this calender year he says since title is gone. FA cup is a very nice trophy to have and continued good form sets us up for a record breaker. Where do ESPN get these numpties. Anyone who think Arsenal’s good form is inconsequential this calender year either does not under stand footy or is likely blinkered. We leaked ten points bc we handicapped ourselves start of season in not getting the Cback to cover Koscielny. On current form and… Read more »

Just in case the media forgets, we have a trophy to play for at end of season and this is for the most number of FA cup wins.

I think the team may just be up for that.

IN Birmingham or London

I agree, but why charge fans to come in? Maybe a charitable donation at the gate would be more appropriate. I remember way back in 1992, I went to the Skydome to watch the Toronto Blue Jays win the World Series of Baseball against the Atlanta Braves. To get into the screening you had to bring some non-perishable food items that were donated to the local food bank. Perhaps something to consider at the Emirates.

It was probably Wenger who ordered that the screens be turned off. He has no tactical awareness, he’s spent more than Mourinho and I’m half goose.

Off topic but from the (always excellent) Arsecast tonight:

Since Wenger arrived in North London, many, many years ago……..the only team that Sp*rs haven’t finished above is…..oh yes!… Arsenal!

Who could not love Wenger for doing that “consistent” job!??

Why would anyone thumb-down that?

where are gunners in Toronto going to watch the final?

Fox and Hound. It’ll be packed. Check the Arsenal Canada Facebook page for details when it gets closer to the day.

I went to the screen last year and it was great, will definitely go again. Atmosphere in North London hat night was great. Roll on back to back FA cups

Which hat did you sport? 😉

Any Nottingham gooners out there know where’s best in Notts. I don’t want to make the same mistake as last year. Although it sounds like Vancouver is the place to be!

Out of context, that still got the feeling we should be in the place of Juve playing against Real

I don’t feel like that at all to be honest. After that game against Monaco we didn’t deserve anything in that competition.

Agree with you that it would have been possible quite easily.

Lets move on and win the Premier League next year as the current Mourinio love-in is like showering in someone’s pee – yuk!!

What? Mourinho won the title? I didn’t know

Hi Anyone knows if this is open to Non members?

Club wembley last season was great, even had some hull fans giving it large first half hahaha. Emirates looks fun but really any pub full of gooners is good.

anyone know if digital members will be able to book tickets for this, or will you have to be a full on red member e.t.c?

Assuming we win the F.A. Cup again. We can beat Chelski in the Community Shield like we beat City. That’s kinda nice. If so, that’d be four silverwares in two years. Anyway, good luck to us all!!!!

I think the thing that I am most happy/excited about is the fact that Le Coq potentially winning the FA Cup. At the beginning of the season I am sure he was resigned to leaving Arsenal this year and having another season on loan. But now, just imagine, he is going to start in an FA Cup for the Arsenal, which will end with him (touch wood) having an FA Cup winners medal!!!!!

At first sight I thought you’re making a joke about naming rights of the FA Cup in the title.

Anyone in Budapest watching the final?

Does anyone know if these tickets will go on sale to digital members too as it only mentions silver, red and junior members on the arsenal website?

The screening last year was one of the best days out i have experienced following the gunners for the last 40+ years. I cannot think of nothing better than sitting with 40,000 other gooners all passionate about the same team. Having a beer and a sing song what a day what a club. will these tickets be going on general sale nearer the day?? o2bagooner