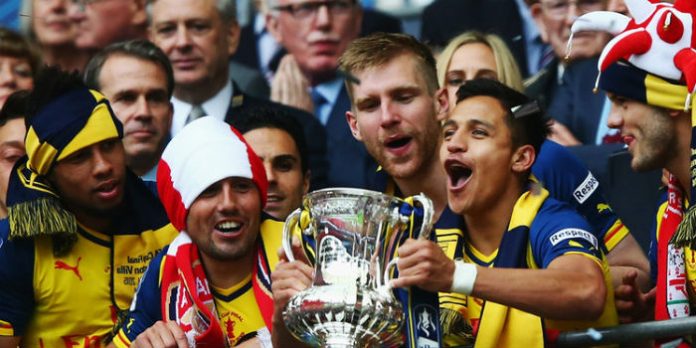 So then. We won the FA Cup again. For the twelfth time actually. And it was lovely.

Here’s what the boss and his players had to say about yesterday’s thrilling 4-0 victory over the Villa.

“I am very happy, very proud and absolutely thrilled because we won the FA Cup but the performance was there as well.

“The quality of the performance was outstanding today and it was a good advert for the FA Cup because we played in a very convincing way. I cannot fault one player – everyone was absolutely outstanding.

“We started strong, stayed strong and finished strong. That is what you ideally want but you do not always get it, but today we got it.

“I think it shows as well that this team has moved forward since the beginning of last season. We are now a much more mature team, who knows its way and plays as well fantastic football.”

“Wembley must be magic for me. I scored against England as well as in a semi-final last season, and the final this year.

“It’s always good to score and that was a decisive moment in the game to put us 3-0 up. It was a great feeling and we are a great unit. You could see how we played together. Collectively, we were absolutely great today.”

“It’s been an unbelievable day. To repeat this is not easy at all, so I have to congratulate the players, staff and all the fans here because they’ve been superb. We watched a really nice final because we were top [quality].

“It’s really good [lifting the trophy]. I didn’t want to do it but Per asked me to go up there with him. I thought it was his day and an opportunity for him to get that feeling that I had last year with the Community Shield. I’m really proud and really grateful. It’s a happy day and the best way to finish the season.”

“It’s a bit different from last year. I thought we controlled the game the whole way through and never looked like losing, so we could enjoy it a bit more and get ready for the celebrations. There wasn’t the pressure of not winning a trophy this year. We won it last year, we retained it this year and we can take it in a lot more this time.

“From the minute go, Francis was brilliant and the midfield dominated. Once we got on top of their midfield, with Theo’s pace and Alexis’ trickery, we were going to create chances and we did that.”

“This team is blessed, and we have a fantastic squad. I have been at Arsenal for a long time and this is truly the best squad I have worked with, and I believe we could go and challenge next year.

“That is the ultimate goal. The FA Cup is fantastic and to win it in consecutive years, not many teams have done that, so it just shows how good this team actually is. The manager (Arsene Wenger) has had so much belief in us since day one.”

“I can’t even believe it! It’s been such an amazing season, and to have this to top it off has been amazing. This is a dream that everyone has as a kid to win a trophy like this in a stadium like for a club like this, with all these players. I have no words, I’m just so happy.

“It was a great display from everyone, we worked so hard for this. We finished the season really well so we knew we had to finish it off.”

“It’s a great feeling. It’s unbelievable, winning 4-0 as well with the way we played. I think the whole team has been tremendous and the last six months have been amazing for me. To end it off with a trophy is just great.

“I think we played a great display today. Everyone played really well and we were focused. At 1-0 we fought hard and had to put our chances in. The whole team was really concentrated over the 90 minutes and at the end, to win 4-0 is a bit big for the opponent. I think the performance was superb today and I’m really pleased to get the trophy.”

Love the focus on the league next year.

I love that our entire team are going to be getting into that cup winning mindset. I’d be pretty confident that having won two FA cups if they get into the same position as 13/14 in the league next year there’ll be no stopping them. Still can’t believe alexis had the audacity to score a goal like that..

Success breeds success. That’s why the league cup final was so disappointing. Now instead of frantically trying to work out why we come up short, the team are hungry for that winning buzz again. Such a shift in mentality. Huge, huge credit to Arsene. Came under the most intense scrutiny this season, and answered emphatically.

Like it says on the tin, it’s fucking excellent!

What a gentleman per is for including arteta.

and that’s why Arteta is a much better captain than full-kit Terry. “I didn’t want to go up, but Per asked me…”

It Is What It Is
Reply to  AllGunsABlazin

He Didn’t. Vermaelen lifted it himself and then passed it to Mikel.

Think we’ve hit on two great leaders and men in Mertesacker and Arteta. The intelligent, level-headed sort that ought to go right into other roles in the club once they are done playing.

We really do have a good squad!

We’re going for the treble next season……
Oh! There’s this other trophy….
What capital again?
Ehen, a fourble will do.
No…. QUADRUPLE! YES??

So proud of the boys today, couldn’t have asked for more! Onwards and upwards coyg

I like that ALL the players are talking next season. No one going anywhere except on holiday.

Anymore could have won by 4-0. Why didn’t we signed Baloteli..
Wenger out…..

17 to 10 (at the time of my typing this) for sarcasm graspability (real word) is quite a worrisome stat.

Unbeaten in the FA Cup for two years running! Signs are good.

I tell ya margaritas aren’t gay and Maureenho is so ashamed… he is probably in a heated argument with Abrahimovic now… Mou: did you see that performance Abe? Abrahimovic: I did. Real smooth stuff that’s how I want my club to play… beautiful footy Mou: erm erm that’s not the point. I’m thinking about the community shield Abe: ahh! a chance to watch the Arsenal close up again. splendid Mou: *murmurs* you prick! I need messi and CR7 to win that shield Abe: what? Promote Solanke, Wenger gave Bellerin a chance and look how that turned out Mou: fuck it… Read more »

Nice one bro. Loved it

His face was real salty

What was that, Bacary? You left for Manchester City for more titles?

btw it was nice to see that when we raised the cup, the lid didnt fall off like last year

I was waiting for the lid to fall off too. Glue?!

Nah, per was sensible and pressed the lid in while lifting it. My man crush for him has gone to new levels after that.

At least Sagna stayed through the tough times and possibly past his peak, so I don’t grudge his one last big contract – I like ManC being our past players our retirement home, a big fat pension contract. It’s players like Na$ri, Ade, R fucking vP, even Cesc players who left us in our hr of need especially when Wenger nurtured them at the cost of a few seasons to build a winning team! None of those players have had any long lasting success (albeit while the teams they joined were more successful than us in the same time). Who… Read more »

I’m just over the moon! It was a clelbration galore in my base here in Nigeria. Couldn’t taste any sleep all through the 9t. Love this feeling! Long may we continue to celebrate like this. COYG

Rossi88
Reply to  brain is a Gooner4Life

Ninet? Sorry to be pedantic. Up the arse!!

Read Hector’s quotes and felt a tear in my eye. Or maybe my eyes are dry from not wearing my glasses. Whichever, it was right on cue. Really happy for the lad anyway

You can’t beat the feeling. Winning it twice in a row. Bring on the league, this team was good enough to challenge for a double but for those injuries at the start of the season. To be realistic about the title challenge though, in my opinion, we will challenge but come a bit short again. Not that we are worse than those cunts winning it but the pressure to win is different. Some managers simply have to win it or they are gone. No room for player development, luckily for us we will always unearth a Gibbs, Wilshere, Szcz or… Read more »

“It’s a bit different from last year” – Jack Wilshere. And the Understatement Of The Year Award goes to…

Smashed it.
Where’s the transcript of Santi’s with a ‘no?’ at the end of every sentence? Everything he does just puts a big smile on your face, no?

Yes, it did for me yesterday, no? Yes, no? Now I’m totally confused! Honestly though, he’s always such a bundle of joy, it’s amazing.

The class shown was much earlier….before the start of the game. AW playing Szcz in goal. That is the real respect. Respect for AW. Respect for Ospina as well to step asiade & support Szcz….can see it after the game…Ospina & Sczc in real teammate hug & congratulating each other

For me, one of the absolutely most enjoyable reactions was Tim Sherwood’s interview with the BBC after the match. The five-o-clock shade, the apathy, just a beaten man, through and through. Well worth the watch. Brilliant. 😀
http://www.bbc.com/sport/0/football/32948273

I was deverstated as I missed the final as I fucking retardly booked a holiday for cup final day (before we got to the final) and was stuck on a bloody plane! However, watching that Alexis goal at 4 in the morning nearly made up for it. I nearly woke the whole hotel when that hit the back off the net!

As much as many complain about Mertesacker’s lack of pace and at times him being a liability I can’t think of a period recently where we’ve had two such class acts as Captain and Vice Captain. Per has been nothing but a rock for us over his time here (after adjusting early on) and his value to the squad cannot be understated. Just wish Arteta could have played some part in the winning of this trophy as I am sure it feels empty to him.

I quote Wenger when just about everyone was moaning and on his back during our poor start spouting pessimism that we are stagnant and need Klopp – “I guarantee you we will have a successful season” If Wenger had the sort of spine and gumption some of these fans exhibit, we would not be here winning the FA cup AGAIN and crucially making history. so Chelsea won the big one but they aren’t making history and no one will remember their title win. They will remember our Invincible year. They will remember our back to back cups plus winning it… Read more »