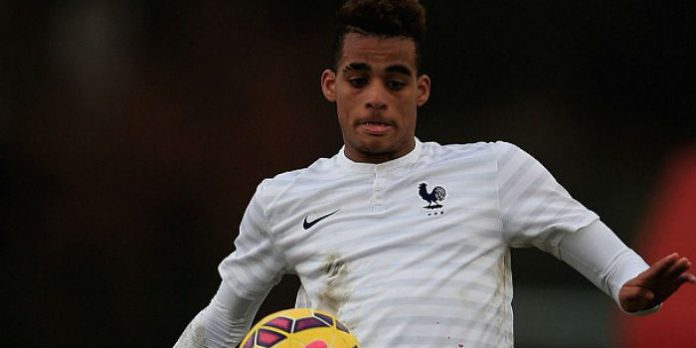 According to France Football, Arsene Wenger has persuaded 16-year-old Yassin Fortune, a striker in the Lens youth setup, to sign a three-year-deal at the Emirates.

Fortune, who has been touted as a possible target for Manchester United in the last couple of months, has represented France at under-16 level and currently plays for his club’s under-19s.

Details are a little sketchy at this stage but it appears the Gunners’ reputation for fielding young blood may have proved decisive in turning the lad’s head.

For those of you who like to make your mind up about a player’s qualities inside 10 seconds…here’s a video of him scoring an Arshavin (vs Blackburn).

My resources in France tell me he’s the new Thierry. One to watch.

Excellent! I wondered how we were going to replace Sunu.

People walked all over him his whole life, hence the shoe print on his shirt…

The cock on his shirt is more worrying. No-one wants a loser, which is what that signifies.

New Thierry? I agree. Just look at his face; practically a mirror image.

That goal is all I need to get his name on a shirt and then proclaim that I knew all a long that he’d make it, even though I’d never heard of him.

You should manage Arsenal. Wenger Out!

Regardless of whether or not he turns out any good, the important thing is that we beat United to getting him. I can’t be arsed to have the press highlight another player who ‘almost signed for Arsenal’ whenever they turn out any good.

Hope he turns out class, though!

I guess you can say we were fortunate to get him…

I’ll show myself out, yes.

The last time United and Arsenal went head to head for a 16 year old was Paul Pogba. I’m still sad about losing out on him… This guy is a real talent from all I’ve seen and read.

He won’t cost a fortune will he?

I’m yassin not, but lens see.

Well done. I was trying forever to come up with a response to this.

Did A Dizzle On It

Hopefully just for capital cup games. I thought we were past pinning glory on kids unless the can keep a 1st teamer, ala HB @ RB.

I’m really hoping the ” we are in no need of a defender” comment was tactical rather than actual.

If only he knew the panic levels such comments create

No matter how much you spend on first team players, you always buy for the future. If he turns out a superstar, we saved us around 40m, if he turns out shit, we’ll sell him on.

Insert joke about this being our new striker we’ll use to challenge for the title next season.

Rumor has it that Wenger wants to convert him into a goalkeeper.

Is that picture photoshopped? Its just it looks like a cockerel is crowing on it. We all know thats impossible. Must be fake….

I keep replaying the goal. Not because I want to see the very neat finish again and again.

Just because I’ve never seen such an incredibly poor sliding tackle from a defender in my life. I’m just confused and amazed at the same time I can’t stop replaying it.

Hmm, I dunno…how can we know he’s a good player if his agent isn’t calling him the next Messi/Henry?

Wenger getting the typical ‘wenger signings’ out of the way early doors. great news. Maybe one more teenager and then I think thats us on to the main course! 🙂

Think long and hard about it son. There’s no rush.

But….. I still love Chuba. Seriously give him a real spin. He looks to have Anelka like speed and raw basics.