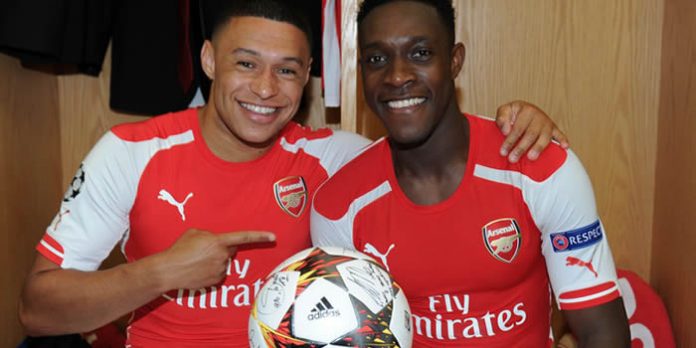 Hopes that Arsenal might be able to tinker a but with a squad that has looked tired in the last couple of weeks took a bit of a blow this morning with some unhappy news on the injury front.

Although Alex Oxlade-Chamberlain and Mathieu Debuchy are back in full training both are considered too short of fitness to be considered for selection, while Danny Welbeck, who would have been a handy replacement for Olivier Giroud remains sidelined.

The former Man Utd man hasn’t played since coming on as a sub in the 0-0 draw with Chelsea almost a month ago and his absence has, sadly, coincided with Giroud’s loss of form.

Arsene Wenger has said that Oxlade-Chamberlain could fit for the FA Cup final next weekend and suggested Welbeck could regain fitness ‘quickly’ but it’s not an ideal situation to throw players who have been out for a while into a match of that magnitude.

Nevertheless, some changes are expected to Sunday’s team with the likes of Theo Walcott, Gabriel and Tomas Rosicky all set for a start.

Now is the time to rotate imo.

Hope this isn’t the last game for our little Mozart…

Is he out of contract? Don’t think he’ll sign a new one if he is but if he has another year I can see him seeing it through.

Anyway, he can come off the bench to score the winner in the Cup final if he likes. Or our sixth goal on the day, I don’t mind.

Question answered, looks like he will retire with us I’d guess and possibly get a role with the club staff ? I hope he does anyway, through all the injuries he’s had some great moments with us. And he also bothers some of the players playing Metal in the dressing room which I find hilarious! Good on you Tommy, hope he starts Sunday and gives the manager something to think about.

He is staying mate :3

The way we played the last two or three games, we can do with Ox and even Welbeck.

Stick with Giroud I say. He needs to keep going and goals will come.

Giroud often responds well to a rest, though. I wouldn’t be opposed to throwing Walcott through the middle or something so he’s in top shape for the final.

Don’t you think a weeks rest is enough for an FA cup final.

He’s played one to two games a week for a fair while now. It adds up.

No he hasn’t. Wednesday was first time we played two games in a week for some time.

Is akpom available for selection? I know that some championship loans include the playoff period to ensure that the player was available in the event of said team reaching the playoff final.

Why are we looking tired in the last couple of weeks? With no Champions League our schedule has not been ridiculous. As great as it is to have a settled team the idea of a squad is to rotate players. Not wholesale changes but give those who look ‘tired’ a break. Yes we have injuries, but not like in the past, and we do have options that could have been used over the last few weeks. For example we could have given Alexis a break and Theo a runout. If we have a problem he is still available to have… Read more »

How do you “tinker a but”?
I think we should be told.

One thing that baffled me about Wednesday was our bench. Why Flamini AND coquelin when you’d very rarely need to use both from the bench. Would have been better served with akpom instead. Hopefully this news means the ox can take a place in the squad and give us the third attacking option.

Looks like sanchez’s not getting a rest, unless cazorla is shifted out left with ramsey/Wiltshire alongside coq and Walcott on the right.

Tinker a *BIT* with the squad.

Hope some players get rested. Saw a Vidal rumour on Twitter this morning, thoughts?

Not great news, as there’s no way they’re likely to get in the squad for next week now, what with having pretty much no game time to practice. Goes to show that the rumours of the Ox not playing again this season were (in all likelihood) true. Perhaps it was a bit too soon to hail the miracle that Shad Forsyth had worked on our injuries. Unfortunately it seems like we’re cursed in some way. We must employ a number of skilled people in the fitness and medical teams: they can’t all be doing their job wrong, so a curse… Read more »

I think Shad’s quite clearly had an impact for the better. Not all of the players are going to be fit all of the time, that’s just how it is. He can’t turn them all into self healing superhumans! The improvements on the injury front generally have been very positive. It took a little while for some players to shake some of the niggles that came with a change of routine etc, but I think we’ll have a pretty healthy bunch generally while he’s around.

I think you have me wrong here. I don’t think he should be making players have superhuman healing powers. It seems like he’s had an effect, but he’s not a magical cure to al our ills.

It’s just annoying how our players seem to be out for extended periods from what sound like fairly innocuous injuries (I’m talking Ox and Welbeck, here – I don’t expect Debuchy to suddenly come back after two bad injuries in the same season).

You have to feel for Debuchy, getting just 10 PL games, one CL game and one FA Cup game this year primarily down to the freak ankle injury and then that cheap shove when the ball was out of bounds back in the middle of the year when he had just come back. When you look at the squad this year in the attacking half of the field we’ve really only had Carzola and Alexis available the majority of the year. Only 3 players will have played more than 3/4’s of the PL matches (Sanchez, Per and Santi) with all… Read more »

I do think it has helped Giroud and Ozil in that they came into the team fresher than the people around them, but yes, quite annoying really.

Debuchy will hopefully (for his sake) get more opportunities next season. In a way, Bellerin seems to have experienced a similar situation to Cashley when he first broke into the team at Silvinho’s expense (although at least Debuchy can heal; Silvinho couldn’t magically have a legal passport).