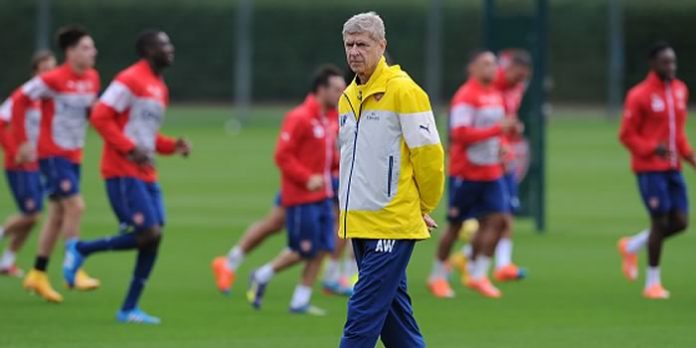 A few days ago we covered a report from France Football claiming Arsenal had sealed a deal with Lens for 16-year-old striker Yassin Fortune.

According to L’Equipe (via Matt Spiro), our raid on the Lens academy hasn’t stopped there with Arsene Wenger also capturing 17-year-old midfielder Jeff Reines-Adelaide. We knew little about Fortune and even less about this chap, but it’s fair to assume he fits the ‘one for the future’ category.

It’s believed we’ve shelled out €4 million for the teenage duo; funds that could go some way to helping the French outfit avoid bankruptcy.

Lens have been mired in controversy since earning promotion from Ligue 2 last season and after a January ruling were set to be relegated for financial irregularities at the end of this season. Their fate was sealed on the pitch at the beginning of May after months of tottering along at the bottom of the table.

Such is the current state of affairs at the Stade de la Licorne they’re even facing immediate relegation from Ligue 2 if they don’t sort out their problems. An overview of the complicated situation can be read here.

Wenger sure seems to be Nikon all their prospects…

I hope they bring us great fortune in the future…

I’m crying out for ya, Lacazette.

I’d be rather peeved if he’s lining up against us next season. So would Mertesacker and Koscielny I imagine.

Aulas, Lyon Football Club President will never let him go without a very big fee and he will sell him by auction.

Sounds a little “Malaga Circa 2012” doesn’t it? Considering we got Santi and Nacho back then, let’s hope these two also come good (and that Lens can sort their stuff out).

Mark Hughes
Reply to  The Only Olivier is Giroud

Although those were international rather than youth players.

Fortune is exactly what we need.

What are we ? A fucking charity now ?

Clearly making the most of a perfect opportunity to nick some promising talent, is an alien concept to you. Do you still believe that taking Santi from Malaga was an act of charity? You just can’t please some people!

…matey, Santi Cazorla was a seasoned, battle-hardened, experienced professional when we signed him.

These “prospects” have to turn into first-teamers one day or it’s just more hot-air.

The problem is, they never seem to make.

“They never seem to make it”

And if they don’t make it, damn them for not being sellable to other clubs, like Afobe.

This is how we got Santi lest we have forgotten.:)

We NEED to win the league next season, for the clubs sake, for your guys sake, and most selfishly of all, for my sake. Upon seeing the CL draw against Monaco, I bet a mugsmashers friend of mine 20 bucks that we’d reach the final. We all know what happened there. So I went double or quits that we’d win the title next season. The platform is there now, it’s about adding quality not quantity. We need 2 players, 3 absolute max. A top striker should be priority, although I don’t think the manager thinks this. A ball playing CDM… Read more »

I remember reading an article about Luke Freeman. The parent club we signed him from were in some financial trouble and due to their relationship with Arsenal, Wenger helped them out by signing young freeman, as a prospect sure but more as a form of helping out thag club. The next morning the papers were rife with “teenage superstar agrees move to Arsenal”. Ever since that story I’m a lot more conservation with my expectations of youth signings.

That was the Liam Brady article right? Really interesting read

Arsene seems to be looking at the future through a Lens

Fool. Did you not hear we signed Fortune? Kid will be 18 next season and ready to bang it in.

Count yourself….. fortunate…… we got him.

As an Adelaide Gooner, I approve of this purchase.

Wenger knows best some more rough diamonds to polish and maybe just maybe he will find a real nugget amongst them if not sell on for profit simple as good strategy me thinks. football = buisness model = genius

When I heard we bought Denilson, the captain of the brazilian youth team 9 or 10 years ago, I felt Arsenal would get very big in the future. After the disappointment, I now wait until these young boys develop and see.

Paulo Dybala. Spend the money on him. He’s the sort of technical dribbler we need to work in tight confines against parked buses.

Also Kongdogbia. He’s a beast with the feet of Diaby. Had Coquelin in his pocket.

Both just over 20yrs but very exciting and powerful players.

The other playing position we need to look out for in reinforcing to academy is a promising Lback.

The academy line is bereft of such a talent at the moment. We have had great success over the years at LBack and should we find an interesting prospect, he should be brought in for the future now in lieu of Monreal retiring in 2 or 3 seasons down (and lest we forget Gibbsy in injury prone)