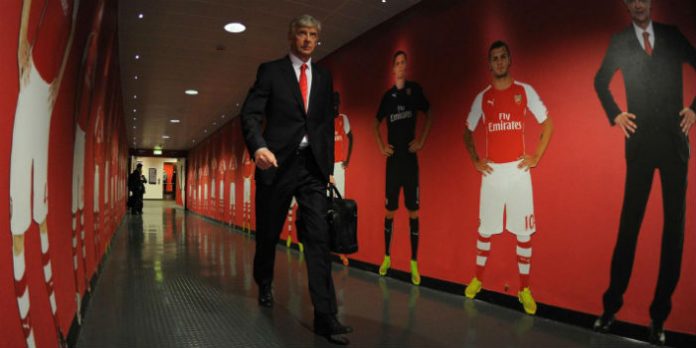 In the wake of comments from Raheem Sterling’s agent yesterday in which he declared his client wouldn’t stay at Liverpool for £900,000 a week before declaring Jamie Carragher a ‘knob’, Arsene Wenger says those kind of public declarations are unhelpful to clubs on all sides.

Sterling has felt the backlash of Liverpool fans who booed him at their end of year awards ceremonies (while some have probably got together to record a special edition of Ferry Across the Mersey with ‘comedy’ lyrics), but the Arsenal manager says often it’s not the player who is at fault when these things become public.

“I don’t want to single out people,” he said “but discretion is the best way to deal with things because once it goes public it is very difficult to master and you have so many opinions.

“I can understand the media is interested in that but for us it always adds difficulties once it’s public. I’m not sure that it is the player who causes the problem.

Wenger is notoriously determined to keep any transfer information under wraps before deals are done, but admits there’s a symbiotic relationship between the media and agents that makes it tough.

“The agents are linked with the media many times and then their interest is to put the story public, and they do it.

“Even for the player, the best deals we have done have been when it is quiet, calm and secret.”

I’ve had issues with my package my whole life….

You are one clever bloke Arse! That title…

He wont be coming to Arsenal with an agent like that, not that I want him here anyway.

Fun Fact: He is also the agent of Oxlade Chamberlain.

yeah but the Ox has a brain. I can’t see him letting his agent behave anything like this. Sterling is your more typical footballer.

Ox also has a father that understands that secrecy is beneficial when dealing with the real ‘big clubs’. They’ll only make public statements when it doesn’t make young Ox look like a money grabbing twat.

And Berahino who was ‘unsettled’ earlier on this season.

That was my immediate thought, then you consider that we bid for a man whose chosen way to move jobs was to have a little nibble on a fellow player and makes you think that maybe he’s not so fussed when he thinks it’s the right man. Sterling, however, is not Suarez, so I agree I can’t see it.

From what I understand, these comments were meant to be off the record. I’d bet many agents of Arsenal players have said similar things off the record. Besides, if Sterling were to arrive on a 4-5 year deal, the agent would at least fuck off for a good two or three years. Also, I’m not sure if you follow baseball at all, but FSG, who has owned the Boston Red Sox and later bought Liverpool, have time and again embarrassed themselves with Red Sox player dealings in the media to the point where the spectacle has become a tradition for… Read more »

Don’t make me cry about my beloved Boston Red Sox. I come here for Arsenal news!

I am also a Toronto Maple Leafs fan (that’s ice hockey for those that don’t know). The Leafs are the biggest team in the NHL (most fans, highest ticket prices too), but they haven’t lifted the Stanley Cup since 1967 when there was only 6 teams in the NHL. Now that is some suffering.

Arsenal are my feel-good obsession! 3rd place and the FA Cup please and thank-you.

Totscum, Red Sox, all the same to me.

haha, ca must be for Canadian Gooner? A Blue Jay fan?

“the agent would at least fuck off for a good two or three years.”
NO, he’ll still be trying to talk to the manager/ main contract guy every month, pointing out that his player would Be scoring 45 goal if he wasn’t injured, or that he would have scored 4 goals in the last 25 mins of that game if he hadn’t been subbed….. Agents (like unions) are a good idea but run by twats.

So you’re anti-union? And you think the labor, and its representation, is too outspoken?

While I’m flattered that you responded to my comment, Mr. Kroenke, at least use your real name. Either that or fuck off back to running Wal-Mart, where you don’t have any of those pesky worker’s rights or representation to deal with.

Hate it when your package gets you into trouble.

I hear Le Coq was happy with the package he received. It made him get an extension.

Wenger looks like a Gangster in the above pic! Arsene Coreleone.

Jeez this is ox’s agent,I hope he doesn’t do something stupid like this with him,any time I’ve seen ox in an interview he seems fairly intelligent and mature so I highly doubt it would

To be fair, Carragher is a kn*b.

Yeah, of all the incendiary agent comments I’ve heard, that one is at least 100% indisputable truth.

Well, the Ox plays for a club that wins titles and play Champions League every season so there’s that. And even though Sterling’s over hyped, he blown up in a way the Ox hasn’t (yet).

Whatever you think about Stirling himself, his agent’s at least got one thing right.

Jamie Carragher is a ‘knob’. But then so is the whole substandard Liverpool pundit claque that infests our football-watching lives.

I don’t care much for Sterling himself, but I don’t like the fact that the “Association of Liverpool Pundits” are trying to bully him into signing a contract.

Agents are a plague on modern football.

Liverpool are a shambles. Poorly run club lauded by the media and they have failed to make top 4 let alone finish above us despite bold media predictions. Going by media logic then, we should have spent on a world class striker like Balotelli (a “No Brainer’) or Falcao. Those were lauded by media as genius moves and show of intent. Plus spend tons of money on mediocre players. Giroud has lest we forget only played half a season to rack up those close to 20 goals the media likes to moan about. Sterling is leaving Liverpool because they are… Read more »

I have a problem with my package. Anyone here with a solution?

I suspect all this package talk was aimed at Theo’s.

As long as Sterling doesn’t come to Arsenal, I really couldn’t care.

But having got rid of Anelka, Adeybayour and Bendtner, the last thing we need is another disruptive ego tripper.