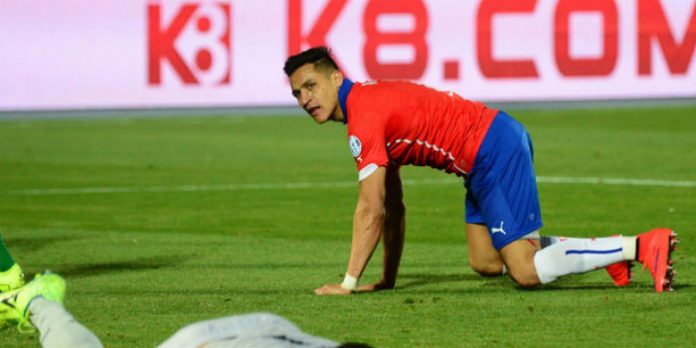 Alexis Sanchez bagged his first goal of the competition as Chile secured safe passage to the knockout stages with a 5-0 victory over Bolivia.

Charles Aranguiz opened the scoring for the hosts with just three minutes on the clock before the Arsenal man doubled the lead on 37 minutes. Sanchez started the move with a typically swashbuckling run before finding the net with a brave diving header.

Aranguiz wrapped up the win after the break with his second and Gary Medel added gloss with a deft lobbed finish. An own goal by Ronaldo Raldes completed the rout.

Arturo Vidal, who’d been told to ‘work his arse off’ by Alexis, played the first half just three days after trashing his Ferrari while allegedly under the influence.

Elsewhere, Neymar’s tournament is over following his sending off at the end of Brazil’s 1-0 defeat to Colombia. The Barcelona striker has been handed a four game ban for kicking the ball at Pablo Armero. His country will conclude their Group C fixtures this evening when they take on Peru. David Ospina’s Colombia take on Venezuela afterwards.

Normal goals are too easy for Alexis. A diving header on the edge of the box is more his speed.

Why oh why haven’t we bought this Sanchez bloke yet?!!!!
Wenger out!

My feelings are so mixed:
Heart: Yes! Great goal! More please!
Brain: He really should have his feet up on some beach.

A discussion between Alexis and Arturo caught by some serious eaves droppers from a news paper. Alexis to Arturo: come to arsenal mate its great Arturo: hummm well been thinking about it. How is it like? Can I crash a Ferrari and still play? Alexis: No problem mate. As long as you are sober when you do it, you will be fine. Anyway it will be difficult because roads are narrow, speed cameras and speed bumps every where. You will need careful planning to crash it mate. Arturo: how are the fans? Alexis: they are great. They will love you… Read more »

giving you a thumbs up because you did what I wanted to do before me!

“Elsewhere, Neymar’s tournament is over”

Me and the old man had a chat about Neymar after he was sent packing from last years world cup. He suggested there must have been more to it than just a spiteful knee to the back. What did Neymar do that lead to him getting carried off the pitch with a broken vertebrae crying like a girl. I suggest the guy is a little wind up primadonna prick who doesn’t adhere to the unwritten rules of sportsmanship gentlemanly conduct. In short, he lacks class.

And there he goes again. Sent packing.

Bit harsh that. At the wc his mistake was not challenging for a header. If he had committed to a proper attempt to win the header he would have jumped and the knee would have connected with his thigh, he might have suffered a dead leg but he’d have been back for the next round.

The real winners of the red card are barca. His season has finished a week or two early. That will give him extra rest during a relatively short summer break.

Apparently Cech is definitely coming in. Sanctioned by Abrahamovich himself. Source 60% reliable though. But it will definitely be clear by this Friday

Sorry this is totally off par but reports are gathering fast that the Cech deal may happen. And I’m nervous as fuck! Nervous because there is every possibility it doesn’t go through after all the hyping. But also nervous because if it does go through it’ll almost be like Sanchez or Ozil in terms of stature. And above all that finally gives us one over those blue cunts after cashley and cesc, I really can’t wait to lap it up.

Let’s just hope it doesn’t involve the Ox going to them as part of the deal.

I very much doubt that Wenger or the other powers that be at Arsenal are that silly.

No chance of the ox going anywhere

Sky Sports says Arsenal have flatly refused to entertain the idea of a player swap and that it’ll be a cash-only deal for Čech.

It would give us one over Chelsea IF he has a brilliant season that materially contributes to us winning the League (or at minimum finishing above Chelsea.) If they are willing to sell him to us then they don’t think that will happen, and they are the ones who see him in training every day.

Sad about Neymar but this tournament just reiterates how great our Alexis is and how lucky we are to have signed him! Here’s hoping that Chile can go all the way in his home Copa America! ⚽️

There’s NOTHING sad about what “happened” to Neymar. He acted like a cunt and got punished for it,

He also hit the posts twice on free kicks.

The defender could have had a fractured leg..he should be more careful while he is near Alexisssss…:P

I am very glad that Alexis ended in Arsenal. I see how people love the guy. I am a new fan of Arsenal for life.
Alexis is a fighter. Alexis will not stop charging or take away the ball from the other team. I wish Wagner would check some other chilean players like Vidal and Isla they are great players non stop. Go Arsenal.