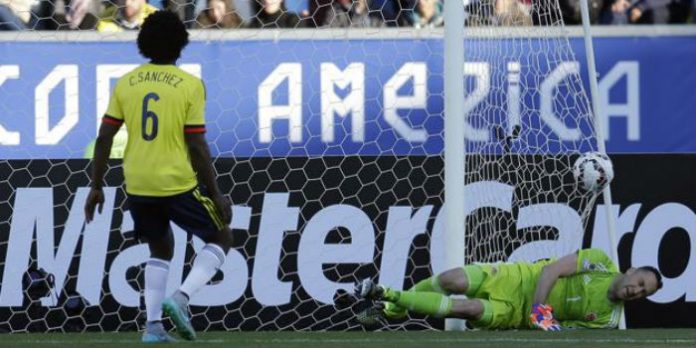 We told you this feature would be sporadic.

Our man between the sticks didn’t exactly cover himself in glory for the goal. Rather than dive for the ball, he did that thing where he sort of runs after it before throwing himself in slow-motion. Ultimately his efforts were in vain.


Colombia head coach Jose Pekerman started the likes of Radamel Falcao, James Rodriguez and Juan Cuadrado, but his side looked pretty toothless throughout. They also had Villa’s Carlos Sanchez playing for them; a footballing suicide note if ever there was one.

In the same group Neymar inspired Brazil to a 2-1 win against Peru. The Barcelona striker cancelled out Christian Cueva’s third minute opener and then set-up Douglas Costa for a stoppage time winner.

He needs to grow 5 inches (!). Otherwise he will always be vulnerable. It’s not the first time he has conceded at that post due to lack of height.

True but his footwork was all-over the place. For a small keeper he should be able to get low that bit quicker.

The goal looks so big with him in it. Great description, runs after the ball and then dives. It’s like having Ronnie Corbett in goal !!

Quite embarrassing for Ospina to be honest! If Szczęsny was in goal… Oh wait, this was a Colombia match.

I’ll show myself out.

Pretty decent header if you ask me.

Chec in Del Boy out

Thank you for a half decent season but it’s time for an improvement and we could make a massive improvement.

If you want to focus on the negatives he could have done a bit better on the goal, but if you watched the whole game you would have seen that the scoreline could have been much worse if it wasn’t for him. Made some great saves before the goal. Ospina is the best goalie at arsenal

More crap from the Arseblog anti-Ospina campaign. Its a strong header, right in the bottom corner. Not much he can do with that.

2 thumbs up. The Ospina bashing is getting rather tiresome.

Ospina is a good goalkeeper and will probably stay just a good goalkeeper. Szcz is also a good goalkeeper with the potential to be great…if he sorts his life out. Personally I would like cech and maybe offload Ospina. That would be brutal but Cech is already great and a perfect match for us. Szcz would stand to learn the most from him. It is quite obvious from the undercurrent of several articles that Arseblog is not a big fan of Ospina and Theo. I get that they are not everyone’s cup of tea but both have highly useful assets.… Read more »

The bashing of both our goalkeepers is tiresome.

But it’s not bashing when there’s truth in it, neither are good enough for a club of our stature and a club with our ambitions. I think Scz has the potential to be a very good keeper just needs to cut out the mistakes

Campaign, would you say? More just that different people prefer different players, fairly basic. That said- and although I much prefer szczesny- i don’t think there was anything ospina could do about that!

He could at least get his footwork right. It would still go in but wouldn’t look so bad from his side.

anybody finds that eerily similar to the one gomis scored a few weeks back?

In other “eerily familiar” news, Sir Chesney’s bum warmed the bench, while Fabianski played the entire game in Poland’s 4 – 0 destruction of Georgia in the Euro Qualifiers on Saturday.

Get ya hat on petr.

Bottom line guys he is a decent number two. He is to small to be a top keeper. Feel free to stay in denial.

Thanks for that stopped reading after it said height will always be an advantage. That’s the point really. If your small you would have to be exceptional, Ospina is not I’m afraid and I like him, he is good back up. Appreciate you trying to be clever. Well done.

Did you say Cech? All i heard was Petr Cech!!!!

You mean the guy with the hat??

You must be joking. It’s the fucking off-season. Usually when a shot/header hits the side-netting, give the goalscorer the credit. Keep up the anti-Ospina vibe though, it might turn into a fancy summer witch-hunt soon.

Step 1: Give Alexis free rein to shoot at our goalkeepers from anywhere outside the penalty box.
Step 2: Ask our goalkeepers to save his shots.
Step 3: Whoever can save the most shots gets the no.1 spot.
Step 4: Repeat before every Arsenal match.

I accept Ospina is a decent but not a great goalkeeper. But is it me alone that feels that Ospina’s shortcomings are highlighted in bright red color always in Arseblog. I follow Arseblog pretty closely and most of the blogs, articles are very decent and not biased (keeping aside we all support Arsenal). Sometimes blog does go a little too far when trying to highlight the goalkeeper of Arseblog’s liking or the one blog does not like.

But still my favourite blog, so have a few ad clicks blogs.

Come on, Ospina will never get the golden glove in the Premier League. Too small, too prone to parrying balls out after athletic leaps (due to his size).

Szcz shared the golden glove with Cech the other season and we could have BOTH those keepers and get rid of Ospina? How is this even a debate?

Ospina was our keeper when we went on the little unbeaten run. How people just write him off is beyond me. Surely Wenger will bring in a new keeper if he feels we need one. Personally, i feel on the sporting front we have quality keepers but maybe we need some experienced guy who gives an assured performance in big games or a guy who can be relied upon when the defence is having a shitty day. GK doesn’t matter when the defence is rock solid but on a bad day a good GK should inspire the defence to wake… Read more »

I watched the game and let me tell you Ospina was the MOTM for Colombia and that tells how bad the team was. Ospina stood absolutely composed and quick in reactions, which comes a bit ironic with the goal, but that’s how a keeper is treated these days, no matter how good you are through 90 mins, if you make one mistake you are sh*t, and I’ve seen that with some Arsenal fans since Ospina arrived.