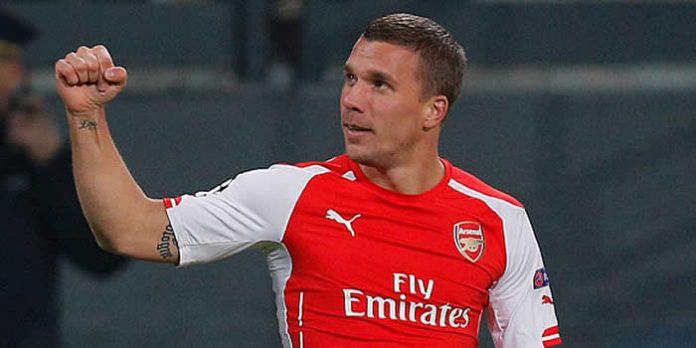 There’s a not a lot to add to yesterday’s story about Lukas Podolski’s move to Turkish giants Galatasaray, but his potential new club have confirmed negotiations are underway with Arsenal.

Negotiations underway for the transfer of Lukas Podolski. http://t.co/6AbgqMLyob pic.twitter.com/353vxbB1I4

So, it looks like it’ll all be done sooner rather than later.

The most exciting part about this transfer from our point of view are all the Galatasaray fans who keep trying to comment on the articles.

While we understand completely you think your club is the greatest in the world, and even that some of you get a little bit carried away by suggesting you would cut our penises off if we ever had fisticuffs together, we’re still not going to publish them.

We like our penises attached to our body and we have no desire to fight in the first place. Just chill out dudes, and enjoy the wonders of Podolski when he arrives.

I find the lack of AD CODE, disturbing

I’m not convinced unzipping a grown man’s trousers would be so simple in a fight situation.

Yeah and why not suck on the penis while it is attached.. actually I suppose that’d be rather gay. If you just detach it and carry it in your manpurse no one would know because only someone severely mentally disturbed would think of such a thing. You could even do it while in the stands while making manly monkey racist chants.

Nothing like a nice piece of penis jerky to get the saliva flowing.

What is going on here?

That escalated rather quickly.

I thought you said the Galstasaray fans couldn’t post here?

I admire this pyramid structure of comment tiers, which I shall now ruin. Beautiful things never last.

Are you trying to tell me you don’t go into battle cock out?

Interesting that Galatasaray would use social media in such a way. Us Arsenal fans know full well how a deal can collapse at the last minute. I am sure it is confidence, but it could also be an insecurity about the deal that has led them to publicize it. Put it on Podolski if he doesn’t end up signing.

Turkey has strict info disclosure laws for publicly traded companies. Galatasaray have to announce any negotiation or signing as early as possible.

Happy for Poldi and Gala

Absolute jonkers…Eboue and Poldi in the same team…Good luck to Poldi though. He looked like a genuinely good fellow

They’re not cutting his penis off!

I like him and I hope he does well there, I enjoyed watching him play for us. But I’m glad the deal is done, he’s not good enough to get many minutes anymore. Not because I think he’s gotten much worse, but Arsenal have just gotten much better.

A little bit of both I reckon, Poldi was going a little off, and we were definitely getting better.

a cutlass to cut off a penis? no wonder they don’t get beyond the group stages in europe that often with muddled tactics like that, clearly never going to work

I feel sorry for the crossbars and goalposts in Turkey! Poldi, thanks for everything and if you must punish an inanimate object make sure it’s the back of the net.

Thanks for everything and good luck.
around 30 goals in 80 games from the wing!
#aha #power #poldi #aha

I didn’t realise Ramsay Snow was a Galatasaray fan.

He”s not a snow anymore

Poldi seems a genuinely nice fellow. Always enjoyed his antics on Arsenal.com’s behind-the-scenes videos and his thunderbastard goals. But this is the right move for all concerned. Though I wish he had moved to a decent league, not that fucking wasteland. (Apologies to Turkish gooners, but you know some of your fellow lot are scum)

How about murdering scum?

Good news. Campbell, Sonogo and Silva next. Bring on the upgrades!

Not in the squad

Thanks Poldi and now we have room for a new striker?

Not sure if others use it but, the arsenal section of the bleacher report app is gonna have nothing on it without all Podolskis Twitter updates haha

Still have a simmering dislike for Galatasaray. Their fans are just the same as they were in 2000. While you can’t begrudge Podolski his move there I won’t be wishing him success. I hope they get found out for some financial doping and relegated to the Bursashpong Hyper League 12.

Gd luck lukas. Should be a good signing. A lower standard league. Should have no problems banging 15-20 goals away.

I love the guy but I think the love for Arsenal supersedes and the standard is now being raised that makes it difficult for average players to nail a starting berth…. #ruthelesswenger #goodbyepoldi #cantforgetthegoalvsbayarn

I assume the money is probably pretty good for him, I just can’t understand why any European would want to live in Turkey. Pretty screwed up country these days.

Good luck pod but not ya team obviously.

Fucking despise Galatasaray. Cuntish fans in a shite league supporting a mediocre team. Hope they don’t rub off on Poldi.

Galatasary are an OK team and they probably suit Podolski. The guy is decent as a sub but Arsenal is too good for him now. I can’t remember me saying “I wish Podolski was on the bench” in 2015. Galatasaray fans are a bunch of seat-tearing, flare-throwing, ISIS-loving racist c**ts. Istanbul is a nice city to live in especially with the wages that he will be on, thanks for the memories and good luck mate.

What is it about Muslim countries and the severing of body parts? Can’t we all just be friends over a nice cup of tea?

A bit?? Hmmmm. Are we talking players or fans?

Ozil is Turkish you plum!

hehe, what a dick.

Galatasaray as a dumping ground while buying off Chelsea, Real Madrid and Barca. To think we worked the other way just a few years ago. We’ve come a long way.

Turkey is a very attack-minded league. Some of the fans are regrettable but it’s entertaining football and he’s well suited for it.

I’m a Turkish Gooner through and through, and I personally take issue with some of the shit being spewed about Turkey by some of the “fans” over here. Honestly, thought you were better than that. Way to endear us to the world at large.

Zenithreptile
Reply to  Just signed up to reply to this comment

Turkey is fucking lovely. Istanbul is fucking lovely. A lot of he people spouting off won’t have personal experience of anything outside of the Turkish people they know in London and perhaps a package holiday to a shit resort hotel which isn’t representative of the country at all. I’ve travelled a lot, Turkey is one of the best places I’ve ever been.

Cornelius P. Snuffington III
Reply to  Just signed up to reply to this comment

Yawn. I’m sure there are people in Turkey who slag England. It happens. Some people can like a thing or place that some other people can at the same time not like. And then there are also people who will just run their mouths without knowing what they’re talking about. Neither of these are unique to Arsenal supporters, or any other group of people you want to define.

Just signed up to reply to this comment
Reply to  Cornelius P. Snuffington III

Didn’t say it was unique to Arsenal supporters. On the contrary, thought we’d (Gooners) be better than it. Made no mention of English/ Turkish people either.

Cornelius P. Snuffington III
Reply to  Just signed up to reply to this comment

OK fine, let me rephrase: To expect Arsenal supporters, or any other group of people, to not include anyone who says anything ever about Turkey that you find offensive is incredibly silly.

Pity he has gone to Turkey

No disrespect to Turkish teams but was hoping he would be in a slightly more competitive league.

He may be limited but still has plenty to offer out left.

That said good luck Poldy. Gala does have a rich history.

This website uses cookies to improve your experience while you navigate through the website. Out of these, the cookies that are categorized as necessary are stored on your browser as they are essential for the working of basic functionalities of the website. We also use third-party cookies that help us analyze and understand how you use this website. These cookies will be stored in your browser only with your consent. You also have the option to opt-out of these cookies. But opting out of some of these cookies may affect your browsing experience.
Necessary Always Enabled
Necessary cookies are absolutely essential for the website to function properly. These cookies ensure basic functionalities and security features of the website, anonymously.
Functional
Functional cookies help to perform certain functionalities like sharing the content of the website on social media platforms, collect feedbacks, and other third-party features.
Performance
Performance cookies are used to understand and analyze the key performance indexes of the website which helps in delivering a better user experience for the visitors.
Analytics
Analytical cookies are used to understand how visitors interact with the website. These cookies help provide information on metrics the number of visitors, bounce rate, traffic source, etc.
Advertisement
Advertisement cookies are used to provide visitors with relevant ads and marketing campaigns. These cookies track visitors across websites and collect information to provide customized ads.
Others
Other uncategorized cookies are those that are being analyzed and have not been classified into a category as yet.
SAVE & ACCEPT
wpDiscuz
66
0
Would love your thoughts, please comment.x
()
x
| Reply