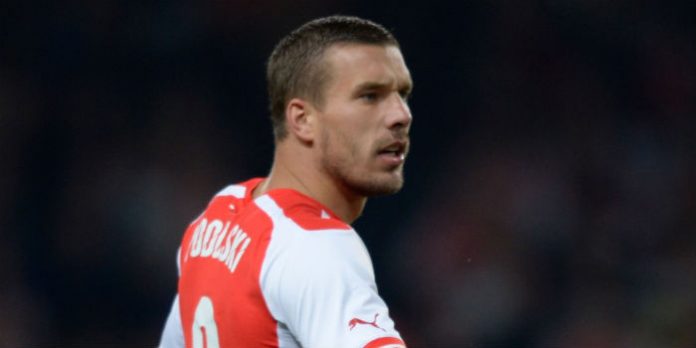 Lukas Podolski appears to have green lighted a move to Galatasaray by revealing he’s excited at the prospect of a move to Istanbul.

Poldi being Poldi, he also noted the enthusiastic reaction he’s had from the Süper Lig side’s supporters on social media.

“I would like to play for Galatasaray,” the 30-year-old told Gala’s official TV station. “They have great fans and I have had a huge response from them on social media.”

“Yes there have been meetings with Galatasaray. I hope the transfer happens.”

The German international scored twice against the reigning Turkish champions in last season’s Champions League in a rare start for the Gunners last season before being loaned to Inter; a move he recently said he regretted.

Last week Arseblog News carried quotes from an interview Podolski granted Bild where he spoke bullishly about making a mark in the final year of his contract at the Emirates.

It would appear that those comments may have fallen on deaf ears with Wenger’s apparently eager to move the striker on for a fee that would recoup some of the £10.3 million paid to Cologne in 2012.

It must be kinda frustrating being polite all the time. The media bytes from Poldi in the last 6 months have been weird. Didn’t work out so well but he did play a role in fa cup 13-14. Good luck

At this point it’s probably just a moist fart

Moving to Turkey as a thirty something – the equivalent of that farm all my childhood pets went to live on.

Yeah we once had a pet called Eboue, had a horrible habit of falling over, we had to pack him off to Turkey…

I only went to see him!

A few years ago, I spent 5 weeks living in Kas, Turkey! Look it up; it’s one of the few spots in the world that I would actually visit again. Plus they aren’t on the Euro so things are still super cheap there.

Also, Happy Canada Day to the other Canadian Gooners out there 🙂

I’m not sure if you’re suggesting that things being cheap are part of his motivation, or what, but I’ll take the opportunity to say this anyways for anyone that might care:

– Kas is a vacation place that’s a 10 hour drive from Istanbul. That whole coast is beautiful.

– Galatasaray is in Istanbul which is very, very expensive.

– If he wants to spend time in Kas, he should just go to Antalyaspor with Eto and Ronaldinho.

Will always remember him for this : http://m.youtube.com/watch?v=P5sWfPCqvqg

His goals and celebrations were pretty feckin memorable too. If only there were more but then he is no left winger wenger. Good luck Pod.

Will remember that goal he scored against West Ham at home, to equalise (I think).
Fucking cuntted it in.

Was this the game he ran absolute riot down the lefthand side? Scored that thundercunt in the 1st half then left West Ham’s right back in a spot of bother and set up two more goals?

I think he set up three more. Cazorla, Walcott and Giroud.

What is this? Every day, different article, with different quotes from Podolski. Either you want out, or you come back to fight for your place. But based on his actions/words in January and his subsequent actions, it’s better for us to sell him and move on.

We all know he aint coming back and we know why. He didn’t work out for us but I still like the guy and wish him all the best. Let not our parting words be harsh.

If chelski can get 50 million for bloody Luiz surely we can get most of our 10 million back for Thor’s hammer!

I still don’t believe they got that for him. I believe they fudged the books because they’re owned by and run by corruption.

The fee was €50m (£35m) which was twice his market value. Account the excess under (a) having to attract established players to the French League and (b) being a rich club known to pay over the odds

It makes no sense to say that you have to pay high transfer fees to attract players to weaker leagues.

The selling club doesn’t give a toss about league quality – the player might. So they have to pay higher salaries, but not higher transfer fees.

We’ll get 8 mill max for him. Good luck Police all the best.

8 million would be a ridiculously good price.

We’ll be lucky to get anything more than a nominal transfer fee, IMO. He’s on the last year of his contract and on huge wages.

Now THAT is a silver lining!

Soooo….just about anywhere then. Not just I will prefer to stay and fight for Arsenal bc going to Inter was a mistake even if I said the same things about Inter when I got there as I am about Gala now. I can’t think where else Poldy could end up beyond either Turkey or another PL club. His mighty left peg may not be articulate enough facet for La Liga or Serie A. France won’t pay much unless its PSG. A return to Germany would be a slap in the face at this point unless its Koln and they won’t… Read more »

What do you want him to say?

Back in January said that he left Arsenal to get more playing time. That didn’t work out, so suddenly things at Arsenal didn’t look too bad. As a result, he started talking about how he was happy to go return to London and force his way back into Wenger’s thinking.

Then presumably Wenger makes clear that wasn’t not going to happen, and another decent club comes in for him. So he says he’d be happy to play for that decent club.

Is it really that confusing?

Don’t want to sound negative, but Ramos exit seemingly inevitable, rumours of Real making a move for Kos are getting louder, am i the only one wary of it ?

Kid is not going anywhere. But football being football, who knows. I’m sure Wenger will allow him to leave if they swap with Ronaldo, maybe bale plus varane but no less. Now bring back bentner

So, who is going to wear the dreaded #9 shirt?

I’d give it to Alexis. That would well and truly break the curse.

No way. I want that thing far far away from Alexis as possible

I’m going to keep following Poldi so I can get a virtual tour of Istanbul!
Dying to see him behind the wheel of a Turkish bus.

Comment:would have been nice if he was fit & stay, but all the same good luck to him

He was useful, only sometimes.
Now the natural replacement in my eyes, since we cant get a WC striker, is Reus. It seems so logical in fact, we don’t have any hazardy winger dribbler apart from Ox. And Sanchez is jack of all trades anyway, while Waclott will move in the striker position.