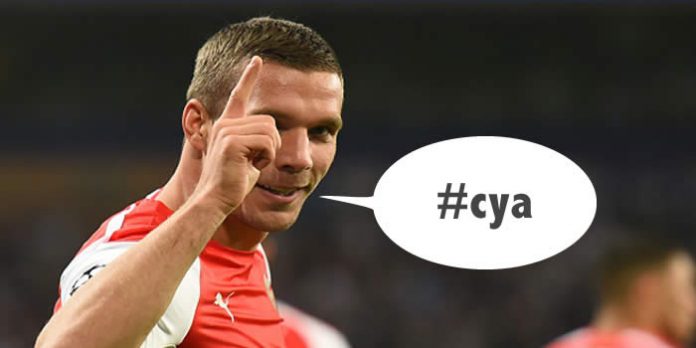 Lukas Podolski signed for Galatasaray last week, and the lack of any kind of farewell statement from him was a bit of a surprise given his interactions with fans online and off.

However, the world has been righted as the German used his Instagram account to say goodbye in his own (quite imitable) way.

“Over the last 3 years I’ve had the pleasure of working with some amazing people at Arsenal, I want to thank everyone from all the staff behind the scenes to the manager & my team mates, who have all helped make London a second home to me.

“To the fans… The best fans in England, who have supported myself and the team no matter what, you will forever hold a special place in my heart and I will forever be a Gunner!

“I am confident that next season the team will be challenging for that league title and I will be watching on as a fan! COYG!”

Some top hashtagging there, you’d expect nothing less. And now he is Aslan, ready to fight a witch in a wardrobe, or something.

Better be careful with that last hashtag Poldi, the FA will come after you, and you’ll never play in England again.

Anyone get jaded/suspicious of this sort of stuff, it is just what anyone leaving will say eg Cesc (like Flamini coming back and saying ‘unfinished business’, it’s the right thing to say).

Or am I getting old and cynical?

He knows how to market himself but also seems a nice guy. The two aren’t mutually exclusive.

And seriously, who is Tottenham?

A bunch of poor blokes building a toilet seat for a new stadium.

And Sp*rs are sh*te, the extra 568 seats they are building in their stadium above the Emirates’ capacity are equivalent to having an extra millimetre on your cock, at the cost of losing all your looks and social skills.

🙂 Somewhat put out at the Evening Standard headline yesterday: “Spurs to be biggest club in London.” Perhaps too many letters to write: “Spurs to have largest stadium in London except for Wembley but, let’s face it, what difference will it truly make in terms of their place in London’s footballing hierarchy and history?”

the only sam is nelson
Reply to  CB

are they trying to compete with West Ham as to who will have the most empty seats when both are finally installed in venues suffering a huge over-capacity (apart from when they play the Arsenal)?

If he had put the effort on the pitch that he puts into marketing he would have been still with us, blasting in the goals. I like him too and his goals/minute ratio is fantastic. But it seemed to be too comfortable for him.

Anyway, good luck to him.

I guess we could even face him in the ECL.

who is this is

Definitely the right move to sell poldi but I’m kind of going to miss him.

Loved Poldi throughout his time at Arsenal, particularly that one photo when he is the only one on the bench with a big smile whilst the others are dull and gloomy and his unbelievable performance against West Ham at home during 12/13 season , but the manner of his exit on loan to Inter was kind of disappointing. Ah well, good luck Poldi.

See ya Lukas. Hammer one of those rockets into RvP if you get the chance. #thelastaha

Thunderblasts one right into his crotch.

That #WhoIsTottenham is da best thing. Goodluck poldi at gala! You’re legend of yourself.

Closure at last. Now we can finally unfollow him.

I hope Wenger opens a flower shop for him this time as a farewell message.

Saw the headline and thought “Course he fucking did” 😉 I will miss the mad bastard.

I don’t wanna piss on anyone’s balloon but Aslan is Lion in Turkish and Azerbaijani and possibly more languages that i couldn’t be arsed to try on google translate.

Aslan means lion in turkish and is the nickname for Galatasaray. 🙂

I know it was the right time for Podolski to go and this is a nice touch from him. A fond farewell from a player who really did love the club. Its a hell of a lot more than we got from a certain RVP (other than vitriol) on his departure.

Aslan (or arslan) is Turkish for lion

Now that’s how a farewell should be.
PS. Kick The Lil boy out of Robin VanPast-it in Turkey

Should I change my name now?

That left foot is still the stuff of legends.

How about Alexis’ engine ?

Good luck poldi…you were the best finisher in our team.
Shame things didn’t work out.

Poldi was one reason for me becoming an Arsenal supporter 3 years ago. I had high hopes for him and his new club. Shame it didn’t quite happen for him here but big thanks for getting me to take the final leap and support a club as great and exciting as Arsenal.

All the best in Turkey, Poldi!

Best memory is in the CL vs Bayern, when he sat Philip Lahm on his arse and then thunderbolted one past Neuer from an impossible angle.

Runner up is this:
https://www.youtube.com/watch?v=EM5lDhEjyK8

Best memory was the third against Norwich. I don’t get to the Grove much but was in a box for that game, right behind the goal and when the second and third went I went absolutely barmy. The corporates around me didn’t know what to do with me! Strangely though, I don’t remember who scored the second (Walcott?), I only remember Podolski wheeling away for the third.

Aye! That was a sweet goal. If he’d managed a couple more and thundcercunted them out of the CL that night he would have gone down in history as one of the clubs undisputed legends.

The Montpelier goal was a fine one too.