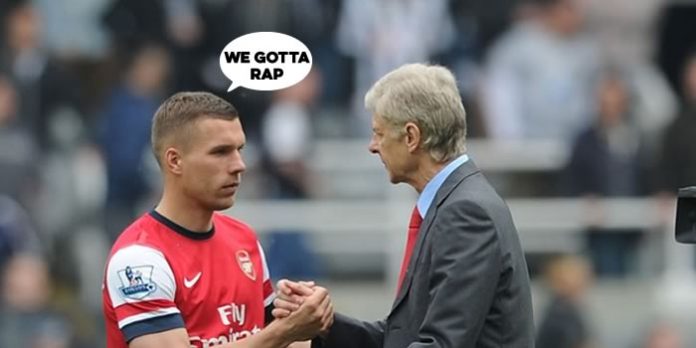 Lukas Podolski’s move to Galatasaray nears completion today, and his agent has revealed that conversations with Arsene Wenger convinced them a move away from the Gunners was the best thing for all concerned.

Having been left on the fringes of the team in the first part of last season, the German international’s loan spell at Inter Milan – where he scored just once in a league where Gervinho actually looked good for a little while – did nothing to convince the Frenchman that Podolski was worth keeping around.

Speaking to Bild, Nassim Touihri said they had discussions about Podolski’s future and, afterwards, considered a transfer was the best option.

“We had very good talks with Wenger,” he said.

“He wanted to keep Lukas, but couldn’t give him a guarantee that he will be starter. That’s why we agreed on a transfer.”

It’s believed a fee of around €4m has been agreed between the clubs and personal terms are not expected to be an issue.

Wanted to keep him? But not to play…

Great guy to have around the place then, for £100k a week.

I cant help thinking you are missing the point. You don’t just say “Sorry, I think youre a [email protected], now clear off and never darken my door again”.
Hope this helps.

Or you are missing the humour/compliment?

I’d love to be paid that much, be wanted and not have to do much.

We’re not missing the humour, it’s just doesn’t exist in your posts.

Apologies, I did try to show the incongruity. I thought it was funny, Wenger wanting him despite rarely playing him, so he must be great to just have around. But having to explain a ‘joke’ never makes it funnier.

Please entertain us, I’m sure you can do better.

But coaches do say: You’re not in my plan or I do not count on you. Wenger probably wanted to keep him and continue using him rarely.

Why wouldn’t he want to keep him? He only has a year left and he’s an experienced international who’s won trophies, not to mention he’s the most accomplished finisher we have. If we can have him to bring off the bench in times of need then that’s a great option. Unfortunately it doesn’t work for Lukas as he wants to play but it does show that Wenger cares less about penny pinching by being willing to pay him £100k a year to sit on the bench and waiver the few million we’d get this summer in favour of losing him… Read more »

Maybe, but considering how little he’s done playing up top he should only ever play on the left and I can’t imagine a situation where I’d ever take Sanchez of for him in times of need…

Actually he would start in the 1st month of the season. Sanchez will need an extended break after the Copa America.

Shame how things worked out for Poldi. I remember thinking he would be a great player for us as a direct replacement for RvP, especially when he notched a couple of goals in his first friendly. Just shows how wrong I can be. Still love him though. #goodluck

I wouldn’t say you was wrong to think that, he scored some absolute belters in his first season and definitely softened the blow with us getting rid of the dutch skunk.

If he had the work rate or an improved positional sense in and around the box he could have been detrimental to the team, shame things never worked out but I hope he finds his spark again.

Nick, you may want to look up the meaning of ‘detrimental’. I take it you meant it in the opposite sense of what its actual meaning is, and in that case, I agree with you.

I didn’t want him one bit when we signed him but I came to see just what a talent and a trier he was. I even thought that if we’d just occasionally adapted our style/formation to make the most of his assets and minimise his defects, he’d have been a very good signing indeed. But we wouldn’t, or couldn’t, so I wish him better luck at Gala. He was a trooper, was Poldi, and he scored some beautiful goals.

Me So Hornsey
Reply to  Miranda

He has possibly the most powerful and accurate left peg in football.

Unfortunately, he lacked strength, stamina and work rate enough to be a regular.

This isn’t just at Arsenal, he’s had similar situations at both international level and at Bayern Munich.

Good luck to the fella, one of the most likeable fringe players we’ve had oh and I’ll still follow him on Instagram. Cheers Poldi.

Nice positive spin there from his agent. I would wager that Wenger’s actual message was closer to “I like you as a squad player, but don’t expect to make the matchday squad every week, let alone the team.”

Best thing for both, player’s career and the club.

Wish him all the best, always looked like a genuinely good person and a great professionist since he joined us.

Mostly I agree, though him complaining that Wenger hadn’t said goodbye to him before Italy sounded just like Yaya’s birthday cake.

And would have been more professional to have put a shift in regularly. Compare to Sanchez (exceptional I know) to see why Lukas wasn’t getting much game time.

I thought that until he cried about not getting a goodbye card from Wenger when he went on loan. I don’t think he would’ve been as nice about the boss after his loan spell if it actually went well either.

When his shot hit the post, you had this feeling that the ball would burst..

Didn’t that goalframe have to spend six weeks in the infirmary with a cracked post?

He was a lazy player and I’m glad he’s gone. He gets a lot of credit from fans for being personable on social media without putting in the hard work on the ground.

Maybe, just maybe, he got some of the credit because of the amazing goals he used to score…

It’s time for passengers to get off Arsene’s bus!

lol…….”we gotta rap man?” eh……#rapwithwenger?…wonder how you say that in german

Seriously?, best solution for all concerned i think!…..though i love podolski, i really can’t see him break into the arsenal ist 11 anymore, not after all that’s happened with the forced loan move, (we now know wenger dosent forgive easy), plus the array of attacking players that we now have fit and available, …and the exciting youngsters knocking on the door.

If you didn’t let Alexis play 55 games he’d probably spend his days off swimming the English Channel instead.

AW has said Alexis will be given time off at the start of the season. Presumably people are happy with the highly successful Ozil on the left ploy or playing the inexperienced Gnabry on the left keeping in mind he played virtually no football last season. Save Santi having some decent games wide, nobody else has shown much on the left.

‘Tis sadly true, if we’d have kept up our early season form when Santi dropped back and Ozil came in then we mght have been competing for the title, but as it is our form tapered off, culminating in that lucky 4-0 victory in the cup final.

Should try an engineer a move back to Germany. Still effective if played to his strengths. The problem with Podolski is the team has to be tailored around him to get his best (As in Germany some many years back) where as Arsenal (and Arsene) cannot afford/believe to revolve the team around a single individual rather the individual must fit the team. Giroud aside (and Coquelin, the back line) all other positions are maleable and players are sufficiently flexible to interchange (EVEN Ozil). Ramsey and Santi typify this. To some extent Walcott is slightly more limited but even he has… Read more »

I hope he doesn’t end up in Turkey.

As much as I like Poldi I think Gnabry, despite his lack of experience, will be the better option as a back up for Alexis, Walcott, Oxlade and Welbeck, if needed. We really have options for the wings. Wish him all the best in Istanbul though. Amazing city. I think he’l love it.

If it had been Podolski kicking John Terry in the face instead of Abou Diaby, it could have ended his career, such was the power in his shot. We can only wonder what might have been…

Podolski is a very nice guy although he was not playing from time to time, he was very important to the team. He used to come as a sub but never complain and he will be missed by the whole team, that is the main reason why Wenger wanted to keep him. Sometimes when he comes from the bench he will score and what more do you want from a player, if he was to be given more time he would score more goals, he is not very skillful but he is an intelligent player.