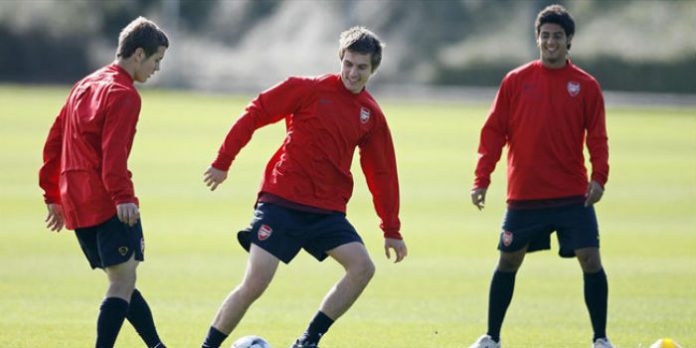 Aaron Ramsey says he and Jack Wilshere can hit it off in Arsenal’s midfield…they just need to stay fit at the same time to prove it.

The two midfielders made their competitive debuts for the Gunners a month apart nearly seven years ago (Ramsey vs FC Twente, 13 August 2008 / Wilshere vs Blackburn Rovers, 13 September 2008) but have only started 50 games* together in all competitions since.

Given the plethora of midfield options at Arsene Wenger’s disposal, and the fact both men prefer to operate centrally, synchronised game time isn’t likely to be a given this campaign either. The Welshman insists though that his and Wilshere’s style are definitely in tune.

“We haven’t had that real chance to play with each other and to show what we’re capable of doing together.

“Definitely when we’re on the pitch together we’re on the same wavelength. I think a lot of the Arsenal players are anyway, especially with our midfield.

“The technique and vision and the ability to play quick and to get the ball down and play…a lot of our players are capable of doing that. Everybody is on the same wavelength.”

Looking ahead to the 2015/16 season Ramsey also sounded a warning to rivals claiming the Gunners can challenge for the title if they pick up where they left off last year.

“It’s been a great few years for us where we’ve had the opportunity of bringing in these [big money] players.

“The club’s a lot more settled now and I really believe now that this group of players, this squad, is capable – if we can keep the consistency throughout the season – of challenging for the Premier League and other trophies.

“That’ll be our main aim next season, to start off the campaign well and to be consistent throughout. If we show the same sort of form we showed in the second half of this season [just past] throughout the whole of next season we’ll be right up there.”

He also touched on his personal aim for the year ahead having endured a frustrating 2014/15 season that saw him repeatedly sidelined.

“My main goal now is to try and stay fit through the whole season. It is a bit difficult when you’re getting injured every couple of months and it gets a bit stop start. It takes a few games to get back into it. My main thing is to stay fit, give it a go and show everybody what I’m capable of doing.”

Yeah, we know what you’re thinking…where the hell have seven years gone?

Cheers to @Orbinho for the stat.
__

Something about the new season has got me excited.. This squad just feels ready, well-gelled and determined to win major silverware.
#COYG.

I agree totally with you. The trouble is that a lot of people have bought into this media-induced belief that a team only improves by bringing in new players. Many don’t seem to value players improving, more chemistry within the team, etc.
I remember that the difference between the ’02-03 and the ’03-04 (Invincibles), was a certain young Gael Clichy.
I believe that even without more signings (not saying there shouldn’t be any), we are stronger than last season and this will show when the league starts.

The 02/03 team was alot more balanced than this team (better strikers obviously).
Oh Lehman, Reyes, clichy, rvp, senderos were bought in 03/04.
So thinking we’re in a similar situation is laughable.

No, you are right as per your last sentence. We are actually in a better situation or at least as good right now, Trez, imo. Exciting times ahead….

Don’t get me wrong, this team is good. No one is saying go buy 5 players like manure or liverpool are doing. But fact remains that we are weak upfront. we need a striker and a dm(i don’t trust arteta as a deputy). Back in 02/03, Goal keeping was the problem, wenger bought lehman. We had a great defence, great midfield and of course the best striker in the league and probably the world. Now he has done well in bringing in cech, however we need a striker to be genuine title contenders. I honestly feel if we get in… Read more »

Like you say, one or two quality signings can make all the difference, but as Tottenham and Liverpool (and to an extent the two Manchester clubs) have shown so hilariously, a squad takes time to gel. We couldn’t manage that in particular when a quarter of the squad kept buggering off every year to find more cash, so it’s so nice to see some stability. For me, the most important thing for this season is keeping everyone fit for as long as possible. That would be worth more than any new signing, I reckon. However, it’d be lovely if we… Read more »

Superjack is on our wavelength too…

What do we think of shit?!

It would be wonderful to see them flourish together. Rambo’s right, they haven’t seemed to have any playing time together which is such a shame. Jack has probably got more work to do to prove he has what it takes to hold down a regular place in the team so here’s hoping this season will be the one. Best of luck boys!

They can work together in certain situations not every game. The biggest issue when they’re both in the middle only seems to be that they dont communicate. They both go and then if we lose the ball there’s no one back.
The other curve ball neither would have anticipated is the partnership Santi and Coq have struck up. They’re kind of indispensable based on last and early season form. Good problem to have though!

Anyone know if the Emirates cup is live on arsenal player or only replays?

7 years together, I’m sure they know each others game well.

Looking forward to their automatisms on the field, hope they get enough match time, given Santi and Coquelin are potentially the number 1 pairing.

Technique and vision is fine, being on the same wavelength also means being willing, and knowing when, to hold position so the other can attack.

If they can figure that out, I’ll be pleasantly surprised. Else thid is alla bit Gerrard-Lampard at the moment.

I am on the same wavelength as wilshere too. Too bad my body could not keep up with it

It will be interesting to see if they can both get in the team, even if they are both fit. They are both reluctant to play wide and seem to compete for the same spot…

I feel like they could work really well together if they can figure out how to time their runs, though. I could see Wilshere running with the ball causing the defense to converge on him, allowing him to pass off to Ramsey running without the ball, who is left unmarked because everything had collapsed around Jack.

Jack’s not ready to take the number 10 spot on a usual basis, but in a year or two I could see the above scenario playing out with Jack as a 10, Aaron as CM, & Coq covering CDM.

Özil someone? Wilshere has not and will never have Mesut’s genius. So unless you wish to offload Özil, Jaaaaack is not about to get the n°10 in a regular basis.

I disagree – Ozil might be a class ahead now, but there’s no reason (to me anyway) to believe that Wilshere doesn’t have that same potential as a world class player, but is simply younger. Ozil also had the benefit of not spending much of his younger twenties being injured and requiring surgery, and also playing with some of the best forwards in the world in front of him for years.

Sadly one of them will be on the bench when everyone is fit.

I feel like the media, in terms of the questions they ask, are trying to stir up a rivalry between Aaron and Jack. It’s a bit pathetic.

if am correct, the last time these two lads played together from start to finish, was against man utd at the emirates few seasons ago where ramsey had the only goal. arsenal bossed the midfield with song playing deeper of wilshere and ramsey. ofcourse they can play together, and beautifully too. COYG

7 years wow! Yeah ryan shawcross is a feckin massive cunt along with the orc fans who boo rambo. He has shown many times what he can do but need to be injury free and just maybe played in his best position… he is no winger wenger.

I don’t think Wenger ever thought he was a winger, but rather he viewed putting a young player out on the edge of the pitch as being good for their education, as they had to get used to passing the ball in tight spaces and the like. It was a bit of a trial by fire for Ramsey, and it certainly didn’t look easy, but I think it’s safe to say that it’s contributed to his development.

Yeah i know how i works mate and agree it has helped him and he is THAT good he coped well and after THAT goal he will never misplace a pass in my eyes.

It’s been 7 years!!!!
It’s about time the Welsh Jesus and the English Lion realise their “fairy tale” potential… Let the Chronicles begin!

I wish things had work out with Vela….still think we should’ve brought him back from sociedad.

The day Ramsey suffered that terrible injury was the day i started reading Arseblog….
I may give up smokes for a fortnight but can’t live without this blog now….

I think the wilshire/Ramsey thing is a bit overplayed. As stated, they’ve barely played together due to extreme injury misfortune just like Ox and Theo have barely played together for the same reason. In my opinion, they can definately play together, they have different skill sets and both of them have had so much time out you have to really count them as two years younger than they really are developmentally. Their peak years are well and truly ahead of them and for us and they have plenty of time to adapt their games. Just look at Cazorla last season… Read more »

Breaking news!
Ramsey is on the same wavelength as Wilshire and the rest of the midfield, who are also in tune with everyone else in the midfield!

Only one more “sleep” until the Emirates Cup…COYG!

Poor Carlos Vela. The smile on his face doesn’t hide the loneliness in his soul.

Is that guy really Carlos Vela ? Wow…… How time flies…..

I’m concerned that Ramsey will want to leave the club next year if we don’t win the league and/or RCL, if you consider he has an agent who tries to secure that he get’s the best deal and also wants to make money for himself then it’s possible he’d want him to move to a club that pays more & where he can get a better signing bonus, bare in mind I don’t think Ramsey went to uni so he might not be smart enough to understand and just delegate all contract related issues to his agent. Scary times..

I never went to uni but I turned out alright. I think.