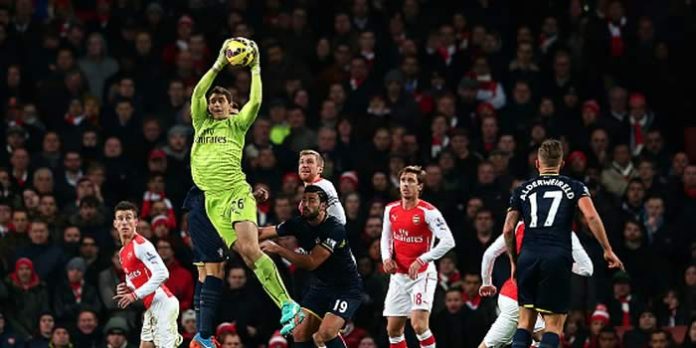 Having confirmed yesterday that Wojciech Szczesny’s move to Roma was almost done, with just some paperwork to finalise, Arsene Wenger has revealed that another one of the club’s goalkeepers could be on his way out on loan.

Damian Martinez began last season as third choice behind Szczesny and new arrival David Ospina, and that hierarchy remains the same with Cech supplanting the Pole as the new season number 1.

The 22 year old Argentine made 4 Premier League and 2 Champions League appearances for the Gunners last season, before a late season loan move to Rotherham saw him tuck another 8 first team games under his belt.

He garnered plenty of praise from Rotherham fans for his performances, with one website going so far as to suggest he be named their player of the season.

However, with his first team chances at Arsenal slim this season bar an injury crisis, it looks as if he could spend time elsewhere this season.

Speaking at his press conference yesterday, Arsene Wenger said of his future, “That’s not decided yet, he could still go out on loan.”

Chances are he’ll depart once Ospina returns from his extended break and gets up to match fitness.

And third choice keeper would be?

Unless we can get Szcz or Martinez back at short notice.

Macey, for sure? He was in the bench for quite a few games last season, when Szcz and Ospina were both injured.

The third choice thing is always worth bearing in mind; it can happen. Chelsea had to rely on the brilliantly named Hilario for a fair while after both Cech and Cudicini were flattened against Reading, and I do recall Manchester City having to sign a goalkeeper (possibly Bogdan, I can’t remember?) on an emergency loan not too long ago, as they didn’t have anyone fit. While it would clearly be best if this young fellow went out and gained some experience, I hope the club plan for every contingency, especially given our disastrous, albeit fast improving, injury record. I admit… Read more »

GKs can have a recall clause in a season long loan agreement.
Outfield players can’t, so they usually go on short loans which can be extended (like Coquelin at Charlton) and when they go on full season loans (like Jenks) they are there for the season.

Martinez and Szczesny are young with loads of potential. If the loan moves work out for both (primarily Szczesny), we have a fantastic future at keeper

If Martinez does what Szcz did at Brentford on loan (Szcz was voted Brentford’s best *ever* keeper last year!) and Szcz excels at Roma then we will start having severe selection problems next season.

Good problems to have.

in arseblog we trust

Are we trying to do with or keepers what Chelsea did with courtois?
Then if it works as well as it did for them, please loan all the keepers we have at the club.

Isn’t his name Emiliano? Fact check Arseblog and I truly believe this lad is the future after Cech not Wojeich,sadly.

There is nothing sad about that

At the start of last season it was announced that he wanted to be known as Damian, not Emiliano; pretty sure there was a press release, and Arseblog definitely mentioned it. Emiliano is his middle name, and while I’m not quite sure how people use their names in Latin countries, and why he was going by his middle name to begin with, it seems to be not too uncommon for Latin players to use different parts of their names. Pablo ‘Dani’ Osvaldo seems to be another such example from Argentina.

Incorrect. It’s the other way around, he now wants to be known as emiliano. Even check the official website.

It was the reverse. He had been referred by his first name (Damian) but asked last season to be referred to as Emiliano, or Emi, which seems to be the preferred form: Emi Martinez.

*doffs cap and defers to the gentleman’s correction.

With Čech and Ospina we should be safe to send two other keepers off on loan.

At 22 of age,it’s not good for his career to stay as 3rd choice because third choice always has one two games to play in all season, for second choice he should stay but imo rather warming bench, he should leave on loan.. We are fine with ospina and Cech. For third keeper, wenger should bring any teenager..

If Cech gets injured and Martinez and Szczesny are on loan, we’re stuffed. Commits to too many corners and crosses which he has no chance in getting to and he drops others.

If Ozil, Santi, Jack and Rosicky all get injured, and Zelalem with Crawley are on loan, we’re stuffed.

Maybe we should buy another CAM? Gotta catch’em all.

We wouldn’t play Rosicky even if he was fit, I fear.

Why not get Stuart Taylor back? He’s made a career from keeping the bench warm.

Don’t worry lads, when he comes back he’ll be LANS

Of course there’ll be a Coquesque call back agreement so chill. Will be good for him to get game time.

A fine keeper he is, Martinez.
A much bigger talent than his countryman, Romero.

No its not. You should consider that as you are about to enter the comment section, there is always that possibility that someone still feels hurt that a player of over 10 years with the club will display such casual attitude while players of few years ago show such great commitment and hence such a fan may decide to drop that as a way to cushion the blow. My advice to you is, before you start reading the comments section you steel your mind and tell yourself, “well, if it happens, it happens” sorry for the rant… Having a bad… Read more »

Bad day at the office? It happens.

In other news, Lord Bendtner just got subbed on!!!!

Watching ARSENAL vs. Lyon on a rather jumpy stream … it’s 4 bloody nil at half time! Great smeg, we’re looking a fantastic team. Four goals of the absolute highest quality! Ozil and Ramsey are utterly unplayable, Lyon can’t touch them. The runs that we’re making, the one-touch passing, the speed of our play – we look in mid-season form. If we can carry this level of play into next week Chel$ki won’t stand a chance.

So long as we work in a recall clause just in case.

Martinez looks very assured. Szsc has a bit of competition.

If there is a recall clause inserted to cover any unhappy eventuality, the goalkeeping arrangements seem ideal to me. We get to retain our options on our younger talent – and they get playing time – while our veterans do the job as starters. Wish we had this kind of depth in a couple of other positions!