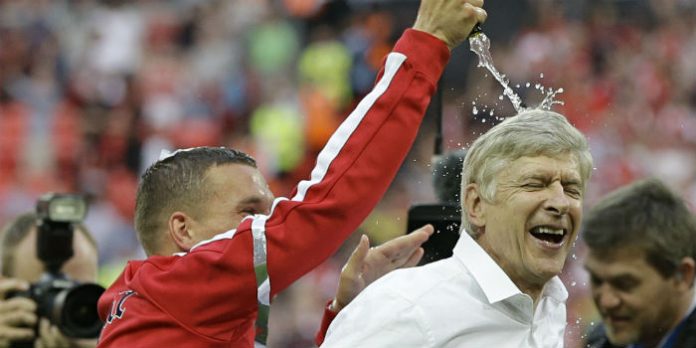 Arsene Wenger has revealed he was happy to sanction the sale of Lukas Podolski to Galatasaray because he couldn’t guarantee the German regular game time.

Podolski put pen-to-paper on a three year deal with the Turkish giants five days ago after Arsenal accepted an offer in the region of €4 million. The deal draws a line under a three-year spell at the Emirates that started promisingly, tailed off rapidly and eventually resulted in a loan move to Inter Milan.

Pointing to his squad’s strength in depth in the wide attacking positions, Wenger told Arsenal Player:

“Lukas Podolski played in a position that is congested because we have so many wide players or players who can play wide.

“I felt that the opportunities for him to play with the stature a player has, he needed to go somewhere and play.

“I believe it’s a good move for him because if Lukas has confidence and trust from the manager, he has the potential and the talent. I was not sure I could give that to him here.”

Last night Podolski thanked the Arsenal fan for their support since his move from Cologne and revealed he’d held extensive talks with Wenger before plumping for life on the Bosphorus.

“After talking openly to Arsene Wenger, I came to the conclusion that it would be best for me to make a move,” he told Bild.

Looking ahead to next summer’s European Championships in France, he continued: “Every player that wants to play at Euro 2016 needs to play. We [Germany] would surely not be world champions if we had started the tournament with 20 players that don’t get to play regularly at their club.

“I honestly thought that I would start team training at Arsenal on July 10 but within a few days things started to move very quickly.

“It was no disadvantage that I was on holiday in Turkey anyway so I could be at Istanbul to sign the contract within 45 minutes.

“The Turkish league is not on the same level as the Premier League or Bundesliga, but Galatasaray are Champions League regulars and have stars with a worldwide reputation like Wesley Snijder in the squad.

“Istanbul is a metropolis and Galatasaray has a very good name in world football.”

I don’t think we’ll miss him terribly. Do we need to bring in another forward?…..

We already have forwards at a superior level to Podolski.

Obviously won’t say no to a world class forward, but it’s well documented that they’re not really available on the market.

In terms of strange signings, up there with Park and Andre Santos for me, a very unwenger player. Little technical ability, especially considering he bought him to play him as a wide man and not the best attitude which Wenger always stated was so important in his selection process. Perhaps just a player at the right price at the right time.

He has stated that he bought him as a CF and quickly realized that it wouldn’t work.

Trying not to sound like a dreamer or with my fifa head on. But if Lacazette, Higuain or Benteke are available id sign one. If the right person is not avaliable you can be sure AW wont sign him. He must be top top quality. The way AW was hanging out the back of Benteke before the Cup final, im surprised he hasnt made a move

I’m not convinced by Benteke. He’s a big useful target man but not good enough technically. Giroud is a better player at the moment.

the only sam is nelson
Reply to  49er

His defending for the BFG’s goal in the Cup final was beyond useless, to be fair. Given the need to contribute all over the park, that kind of basic sloppiness is unlikely to get him signed by Arsenal, or any other big club. Probably why Liverpool are all over him.

Mein Bergkampf
Reply to  the only sam is nelson

If Liverpool spunk 60m on Benteke and Firmino I will laugh my arse off. Man, they are so poor at getting the right player and the right price. And it’s just the same mistakes season after season. Tottenham do the same. How lucky we are to have people with impeccable judgement when we go big. Ozil and Sanchez or Lallana, Markovic and Lovren? Ozil and Sanchez or Lamela, Soldado and Paulinho? Bloody hilarious.

And he has a glass knee and is about as good as he will probably be at the moment.

As others have pointed out, really not a fan of Benteke. He doesn’t offer anything more than what Giroud does, and obviously Giroud’s link up play is considerably better, hence Giroud any time of day for me. If however there’s a striker that complements Giroud, I think Wenger would do it. Someone who runs in behind defences, clinical, much like Eduardo was in that 09 season (Martin Taylor you fucking cunt, cost us the league that year). That being said there aren’t that many out there that fits that mould. Lacazette, Higuain (but not at > 30mil), Muller (a bit… Read more »

Higuain has always had confidence problems when it really matters. See copa america.

He’s not what we need to be the difference and win us the league.

Lacazette has the potential to be truly great. It’d be a gamble though – do you sign him now when he costs a lot and maybe end up with a flop, or do you wait a year – and if he’s this good again next year pay 50 million for him and have to compete with real madrid? But you might dodge a bullet too.

A great player who hasn’t fulfilled his full potential. The guy is class but I can’t help thinking he’s got some sort of mobility problem the last couple of years. I think his muscle mass is hindering him as the bigger muscle mass you have the longer the recovery period after a sprint for example. Also his play is generally from the wing but he isn’t a natural winger. Also not a natural striker either, judging by his hold up play or running behind the defence or between the lines. Did enjoy him being in the team anyways and wish… Read more »

Sounds like this worked out for everyone in the best way. The hope would be that with him and Joel Campbell looking to be offloaded, Sanogo probably sent out on loan, we’d be mad not to sign another striker.

Even though all the players you mentioned were all sent out on loan last year … ?! We have a great squad with plenty of depth. Get them off the wage bill. Am all for strengthening, but no need to sign players for the sake of it. Give Akpom a chance!!

Poolski showering Wenger with champagne and soon his career at Arsenal ends. Reminds me of Bentley soaking Harry Rednapp and hardly getting a look in afterwards.

except with less cunts?

Lu lu lu Lukas podolski; still remember when everyone here went crazy with that song when he signed for us. Well good luck Lukas and we will be expecting a a lot more selfies from you. #aha #selfieking

As much as we all loved him and his shot, the stats did him no favours and wenger was right to get rid.

Good luck to Poldi, going to the Galatasary, they are ok.
As for RVP, off to Fenerbahce, enjoy the dark side my traitor friend……….

I see RvPoo has told the Sun that he’s talking with Fenerbahce because he feels “betrayed” at Man Ure. Holy fuck, is this guy serious? This is the prick who wrote the book on betrayal when he stuck the knife in Arsene’s back three years ago. What a cunt!

I remember poldi was our first marquee signing after which we went on to sign giroud and cazorla. I never missed the dutch skunk like i did soon after Fabregas left. Also, we announced Poldi very very fast. That was a clear sign to me that Wenger was back to his usual pro-active self having been restrained for so long due to financial restrictions.

He was also announced quite quickly, probably to calm people down after everyone freaked out about RvP’s back-stabbing temper tantrum.

Since when did Galatasaray have a good name in world football? As for Podolski he wore our shirt with pride and gave his all….. so I wish him all the best for his future

And Istanbul is full of doner kebabs, how could he not have mentioned that!?

🙁 thats gonna cost you Wenger. when you see from far how good player you lost

But, Arsene did had a look from afar when Poldi was loaned out to Inter last term.

All the best to Poldi in Gala!

Adept on social media and a crazy #hastag pro. Just too bad he didn’t show the same application on the pitch.

They slagging off of Podolski’s is a bit harsh. He scored some great goals for us eg vs Liverpoo in 2014 FA Cup and was massively helpful in getting Ozil.

Didn’t work out because he wasn’t the right fit but his goals to game ratio is pretty good and he brought some epic bants to the dressing room. #aha

voted one of the worst players in Serie A

Not good enough. Ppl just get excited by his occasional rocket shot!