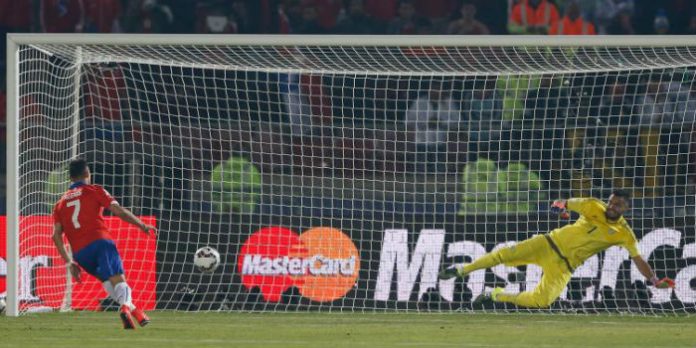 Arsene Wenger has revealed he text his congratulations to Alexis Sanchez immediately after the striker had secured the Copa America for Chile.

The Arsenal man’s cheeky Panenka penalty in the shootout victory over Argentina ended his country’s 99-year wait for the title; a feat that put a smile on the face of the boss.

Speaking to Arsenal Player about the achievement, Wenger praised Alexis’ strength under pressure and disclosed the 26-year-old is already eyeing more silverware next season.

“They [Chile] had quite a comfortable lead when he took the penalty but I was a bit worried because he missed one with us.

“He has shown again that he is scared of nothing. He took the ball and chipped the keeper. It was quite audacious but I was of course over the moon to see him bring the trophy to a country that has waited for such a long time.

“It is an historic achievement and when you’re a football player, you want to do that, so I’m very happy for him.

“I texted him [after the final] and he texted me back. He was already focused on next season with Arsenal and wants to win everything with us. He was thrilled and very happy.”

The boss also confirmed that Alexis will miss the Community Shield game with Chelsea on 2 August as he’ll still be on holiday.

The attacker has been granted four weeks rest before he joins his teammates in training ahead of the Premier League opener with West Ham.

Gotta love Sanchez, his attitude is so good <3 what a player we have~

He can Rub off the trophy winning traits on the Others #COYG #ALEXISISABEAST I am sure he’ll be right up there or more decorated than the all time legends.He is truly a polished GEM.

I can just see Alexis in the Chile dressing room after the final, drinking out of the Copa America trophy and texting Arsene Wenger asking when training starts, when’s the next trophy boss, etc.

I heard he’s taking the four weeks to swim back to England.

Come back stronger, alexis. Show what you can do more for us next season!

4 weeks. My guess we will see him in two.

When he was at his very first club, five minutes after he’d played in a match, he’d be changed and dashing back to the street to play another game with the kids.

Anyone who hasn’t the seen the BBC film about him, it’s on the iplayer until Monday. Not sure if you can access it from outside the UK, though. Maybe youtube?

Thanks, I hadn’t seen it. Great film, truly inspiring. Made me feel even more proud of him, proud to be a Gooner, delighted to have him at the Arsenal. A classy guy.

He’d probably spend his holiday playing football on the beach, then turn up at Wembley in a pair of sandals to politely ask the boss if he could at least come on for the last half hour or so of the shield.

He’s obviously not going to win the World Player of The Year but is there a chance he could be on the podium in the top 3 considering he had a successful Copa America.

I still think he had a better season than Hazard. I guess they always give the player of the year to the team that wins the title…

By that logic, next years player of the year should either be Mesut or Alexis. If you know what I mean 😉

“I texted him and he texted me back.”

Sound like something a 15-year old would say while talking about her crush. Keep it in your pants, Venga

I think the 15-year old girl in all of us is just jealous we can’t say that about Alexis.

I had mixed feelings about supporting chile at the copa….I wanted them to win because of Alexis obviously and on the other hand I wanted them to get knocked out so Alex is can have a much needed rest.
The copa win will lift his spirit for the upcoming season, we need him to kick on from last season and probably get us 20 goals in the league.

You could finally text Scznzcenzynzy and say “you’re our new DM, I tried it on FIFA and it worked against some fella”

Four weeks of “resting” probably means four weeks of working out and playing football in Alexis terms, so I’m not worried about his form when he gets back.

I guess he is gonna jump into a Gargantua, spend one hour, then come back and say “boss ..can I join?” ..

and the boss replies..

Come on son..where you been? You know the funniest thing happened while you were away? Spurs built a toilet seat which can be seen from the Moon now aliens shit there!

Am I the only one who is extremely bothered by the fact that their stadium isn’t going to be significantly smaller than ours anymore? In fact it’ll be….*whispering now* a thousand seats…. Larger…….

Not extremely bothered. They just had to make it be a little bigger than the Arsenal stadium, they were always going to do that if they could. I think it just shows what a chip they have on their shoulders. North London will still be red.

Given their tendency to throw money away, they’ll probably be relegated because of the stadium debt.

Talking about beast, the original beast is Julio “Wenger will make me The Beast again” Baptista.

Alexis is the only player i have ever seen running around like jackass for 120mins and still come back to do a funny cheeky Panenka penalty.

Alexis can win us the title if he can win the Chileans copa America against world best.

“Hullo, Alexis? Don’t forget to use protection. At least SPF 30.”

“Hullo, Wojciech? I have checked, the Arsenal ashtrays are out of stock. Send my apologies to your friend, and to Jack’s friend.”

“Hullo, Carl? The Limited Edition bed sheets have been delivered to your house.”

“Hullo, Mikel? The board has decided, no more advances for hair gel. I am very sorry. Little bit goes a long way”

“Hullo, Yaya? If the ice cream is too cold you will get little bit brain freeze.”

I love the man, but absolutely not a Panenka. Not enough height or backspin

It was a low panenka. Didn’t end up coming out as nice as he probably wanted but he definitely chipped it and it definitely went in to win him the Copa América against Messi!

He scuffed it… But hey, the ball went in, Chile lifted the trophy and he wants more of the same with us. Yes, please!

I doubt Arsene has had such a man crush on any player like he does with Alexis since Henry. Not even Cesc or RVP got this much affection from him

I think Alexis has been over the moon… and back! Several times since the final and is now on his way to venus where he will take ur.anus.

People who thumb you down may not know what it is in reference to.

The contrast between Alexis and Higuain under pressure couldn’t be more pronounced. Alexis looks like he lives for those seminal moments in the spotlight, like he’s prepared all his life for them and would kill to get that opportunity. Higuain looks like the proverbial deer in the headlights who hits and hopes. The difference is almost palpable.

When Alexis does press ups he pushes the earth down.

I would text Alexis and say:
I love you man!:)