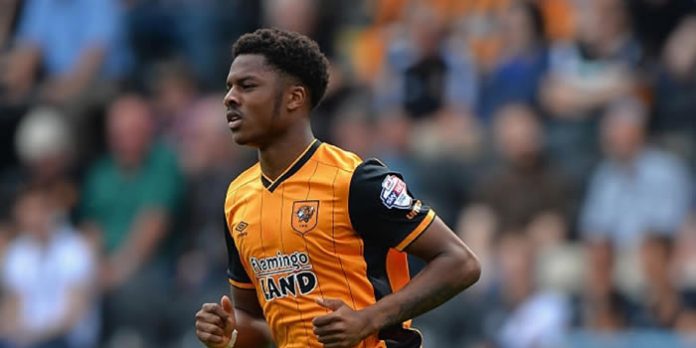 Steve Bruce has waxed lyrical about Chuba Akpom after the young striker made an immediate impact to his loan spell at Hull City.

He got off the mark last week with goals in his first two games (against Huddersfield and Accrington Stanley in the Capital One Cup), and he was unlucky not to score against his Arsenal teammate Emi Martinez, during the 1-1 draw with Wolves on Sunday.

Highly rated at the Emirates, and given a new contract at the end of last season, the Hull manager was forthcoming in his praise for the 19 year old.

“He has a lot to do and a lot to learn, but, in terms of raw talent, you don’t have to watch him long to realise the natural ability that he has. Only a few are blessed with that.

“He has to learn and this league will teach him that. Had he scored, that would have been three in three for him. It’s been a wonderful start.

“He turns round and runs at defenders, that is when it is tough for the opposition. He has an outstanding chance because of his ability.”

So, a promising start to his Hull City loan spell – and just what he needed after failing to score in previous temporary moves to Nottingham Forest, Coventry and Brentford.

Let’s hope he keeps it up.

Good luck Akpom. Hope you make it back to our first team soon.

Yes Steve,his talent’s as plain as the nose on your face!
Love the Choob Strike headline.Hope we see it for many years to come at the Arsenal.

There’s no need for that. Steve Bruce comes across as a nice bloke. Arsene is always willing to do him a favour and I trust Arsene’s judgement. Brucey is cool with me.

Also looks cuddly like Santa, so it’s a double-plus for me!

Agree, Bruce seems like a good man and he allways speaks warmly of Arsene and has on numerous occasions defended Arsene in times when our manager has received alot of flak.

He does have a big nose though.

Hope he gets promoted with Hull then he could have a go in the PL with them.

It was enjoyable to see Afobe v Akpom the other day.

Even nicer that Akpom was the more impressive.

With Martinez and Hayden involved as well. Most enjoyable Championship game I’ve watched in a long time/

Couldn’t agree more, I watched that Hull game as well. Akpom’s energy is awesome, when he gets out on the wings with his speed & strength(& at 19) other defenders just can’t handle him. The funny part about this game though was Jelavic getting in Akpom’s face about not passing him the ball(Akpom did shoot rather then pass to Jelavic 2-3 times before tbf but who gives a ….. Akpom actually didn’t back down & later came close to scoring but hit the post.

Chuba is a top lad! May this be the beginning of a successful spell at Hull City for him. <3

What’s clear is that this kid has definately got a decent career ahead of him.

The question is at what level? In the past 12 months he’s overtaken both Campbell and Sanogo in the pecking order. By May he may well have Wellbz and Giroud in his sights.

CHUBA! CHUBA AKPOM! He’s the greatest striker in the league.

Still better than the “he’s one of our own” for defacited spud.

That was close to perfection! May I still suggest “AKPOM! CHUBA AKPOM!” as the only modification? You know since it’s “Flinstones! Meet the Flinstones…” I think it would be a slight improvement 😀

I would love to have chuba leading the line for arsenal in the future! Arsenal DNA!

Wenger to Steve:”if you like Akpom, you’ll love Sanogo.”

Then one of Bruce’s scouts jumps into the scene like,”Don’t do it,Steve! Don’t listen to him!”

Still one of the best songs ever

If Chupa Akpom is not being sung to the batman tune in as few years I will be very sad.

Been yearning for academy players to effectively break into the first team. Guess I won’t have to yearn for much longer than this season and next at the latest. Chuba, Jeff, Iwobi, Zelalem,Toral and Martinez are well on their way.
I magine such array of boys blending with the ones we already have such as Bellerin, Ox, Coq, Alexis etc.
Their emergence will also free up cash for high profile acquistitions in key areas to round off the team. Exciting times.
I think we are sorted for the next decade or thereabouts. Thanks Arsene.

I hope him and Afobe come back to tear opponents’ defences and break all sorts of records for the Arsenal!

Errrm Afobe is gone sold and the money was used to buy Bielik. So he won’t be coming back. But again this is football eh. Never know what’s in the corner

Has a buy-back clause.

He is a huge talent and will definitely make it to the top level if he continue to improve. Another rare gem from the miner (Arsene).

The Beard of Ramsey

I made this comment before and my brother stole it and posted it on here and received a large amount of undeserved thumbs up but if we don’t have a chant to the tune of
Tom Jones’ “Sexbomb” i.e “Akpom Akpom Chuba Akpom…” then we really are missing a trick

The big question will be can he hang on with Arsenal long enough to eventually take Giroud’s spot in the squad as he is getting up in age for a striker and does take a big pounding each match. If we sign a striker this window I can’t see him getting any chances for a few years.

If he keeps hitting the net for Hull City, then we should extend the loan deal by a year.. He is just 19 now, even at the end of a successful Championship campaign he can’t be even second fiddle for us. He needs to play.

Oh. And does this get better.

Seems like Maitland-Niles was Ipswich’s MotM against Burnley and Jon-Miquel Toral (two in two games) is Birmingham’s best player so far this season.

What’s particularly good is that Isaac Hayden, Martinez, and Akpom are all starting matches and impressing the clubs they’re loaned out to. Maybe their club managers have heard what happened to Coquelin and decided not to waste these players’ talents by sitting them game after game on the bench. If so they’re being rewarded. Seems like the Championship might be worth watching again this season.

Crowley getting rave reviews at Barnsley so far. Don’t even know why he’s down in league 1, him Ampom and Ainsley were easily the best talents in the academy these last few years (with Bellerin + Gnabry who’ve already made the first team)