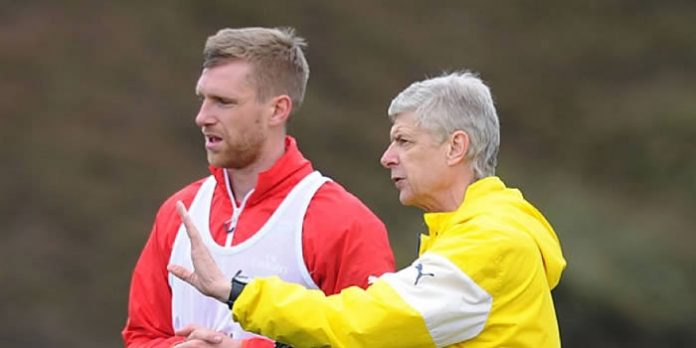 Arsenal’s central defensive worries continue ahead of Saturday’s game against Newcastle with the news that Per Mertesacker is still suffering the illness which kept him out of the 0-0 draw with Liverpool.

The German is rated least likely to make the trip out of the regular pairing he forms with Laurent Koscielny.

The French international missed Monday night’s clash with a back problem and is due to have a fitness test today to decide whether or not he’s recovered sufficiently.

If not, the manager has to decide whether or not to keep faith with the Calum Chambers/Gabriel partnership which struggled in the first half against the Mugsmashers.

There was also an update on striker Danny Welbeck, yet to feature this season, with the boss saying, “Welbeck is progressing well and should be back after the international break.”

What’s he come down with? The plague? Who’d have thought a couple weeks ago that central defense is where our depth would be seriously tested

I guess it was also to do with opposition too as Liverpool tend to hassle our defenders. They should be more calmer on Saturday as they are clearly talented. Lets not forget that statistically they have yet to leak a goal with thanks to Cech of course.

Chambers is the one who needs to relax a little as Gabriel seems more assured of the two.

… but you are so right. Our glaring positions of concern have rightfully been a forward and a DM… Amazing that the first depth issue we experience is the one where no one had any particularly pressing concerns… our CBs… but alas, this is Arsenal.

I think the backup will be much better than last week. 3 points and 3 new players please, Arsene.

Keeping fans happy may not be easy but it is simple!

“But I cannot promise you that. We work very hard and I have a team around me that works day and night to find good solutions but at the moment we are not close to signing anybody.”

Wengers words this window, which could be from any window in the last few years.

Im praying for an Ozil/Alexis sahpped rabbit out of the hat and also 3 points otherwise, things will get even more ugly again at the emirates/blogsphere etc ………….

yo
Reply to  Crispy

I’m satisfied with that response from Wenger to be honest. I’m sure they’re trying to sign players, but there’s clearly a severe lack of talent in the market, everybody can see that. I’m praying for an alexis/ozilesque signing too, but it would have to be of that level, and players like de bruyne going for £55m makes me think that there’s just no-one of that calibre available right now. Mind you, everyone gives credit to ‘Arry for his wheeler-dealing, but Wenger’s not half bad at pulling off a deadline day coup, so maybe we’ll be surprised.

It’s strange but it does not worry me this morning. I’m conservative with the bigger issue of city and Chelsea improving their squads while is seems our manager actually believes we can win the league without spending. When coq went down the other night it looked serious for minute. Can you imagine with all due respect to Arteta and less so Flamini the prospect of either one being our holding mid. Frightening is it not. Wenger says he won’t buy unless it is better than what we have. Er Paul Pogba. Offer big money and we could get him. Make… Read more »

this is not FIFA16 or 15 for that matter 🙂
maybe it is happening but we won’t know until it’s done.

We just get no fucking luck at all

two bullets in the chamber
Reply to  George

In football you make your own luck. This is not bad luck, it’s a pattern

OvertheGoon
Reply to  two bullets in the chamber

I like your theory, there is a pattern. This isn’t the first time Mertesacker has been out sick. Do you think someone (Wenger?!!!) is secretly injecting him with some kind of virus? Possibly trying to create some form of giant super footballer immune to all injury. He is just ironing out the side effects. Hmm

I think the pattern is being realistic with yourself knowing that your first team options WILL not always be available thereby ensuring your back up is not too far off option 1 in terms of quality.

We have that in terms of cb though no? Gabriel showed himself to have real quality and while Chambers had a bad game, he has produced some excellent performances as well. It’s also not easy to have a fourth choice cb with the quality and experience of Koscielny or Mertesaker. Could you name any in the Premier League?

Firmly believe we have some of the better quality replacements when you consider who other clubs would have had to play if both their 1st choice CB’s were not available.

Not one of those combinations would be much better than Chambriel, expect a better understanding between the two after one game together and probably a week of practicing next to each other

two bullets in the chamber
Reply to  OvertheGoon

Easy to make jokes. But fact of the matter is both our starting CB’s are out and their backups are two very raw players with barely any play time in that position in the EPL. What was it last season? Kos injured and Per saying he is suffering from lack of motivation after winning the world cup. And even if Per was not ill, would you trust him to play well without Kos for partnership? We keep talking about how good their partnership is but what we actually have is if we lose one we basically lose both because one… Read more »

Dexterbear
Reply to  two bullets in the chamber

I think gabriel has looked good so far. He may not have much pl experience but neither would hummels/howedes. Gabriel is much faster than both so is a legitimate partner for per unlike the other two as well. Although its not good to have both center backs out injured the two reserves both need games so its not all bad.

Chambriel it is then. Good luck to them, gives CC a chance to prove the doubters wrong.

Rather Debuchy than chambers imo

Yeah I’d also go for a Paulista and Monreal/Debuchy pairing at CB.

I’d be quite okay with that Chambriel pairing again on Saturday. I don’t see Chambers having such a mare he had in the first 45 minutes on monday anymore. He will rather want to build on the second 45.
I remember Bellerin against Dortmund last season; he was atrocious to say the least but look at how that turned out – currently keeping a French international on the bench.
3 points is the minimum on Saturday and I have a feeling it will be our best performance this season yet.

I too see three points as a minimum on Saturday and hope that we actually take four or five from the match.

I really hope Chambers ups his game, another performance like Monday will make him a bench warmer for the rest of the season.

Hope Wenger and Bould don’t have Gambers play such a high line again.

same defense as monday night and the ox in earlier. we should be ok. alexis is not there yet. think he should be on progressively. he has played a lot a football this last two years without a proper break.even if he is an engine.we would be more incisive up front with alexis at 100 %. the boss has to decide between ramsey, ozil and cazorla. the three cannot be starters.it’s obvious we need a proper wide player on the right.give the keys to mesut once and for all. he is an incredible playmaker but he needs speed in front… Read more »

Cech, gibbs, kosc, gabe, bellerin, arteta, rembo, sanchez, cazorla, ox, giroud. Subs in 65th minute, if needed, ozil-cazorla, Walcott-ox or sanchez, and anybody for Giroud at that point…. We still have nacho chips, debuchy, and chambo for back

Never had a plot to begin with.

What Chanbers had on Monday night is called match fitness. You only get it by playing regular competitive matches. The boy hasn’t played for ages he was rusty. He will be sharper this time. Keep faith guys.

I hope Chambers isn’t dropped in favour of an unfit Kos, or out of position Monreal or Debuchy. We only need to look back at the initial performances of Bellerin to see what continued presence in the team line-up does for an young player. Let us have the faith in him. As it is, we are not flying at the moment performances wise. It is a good time to check our depth. #COYG

I gave you a thumbs up, but disagree on this narrative that Bellerin was terrible against Dortmund.

Every other player around him was atrocious, so why does everybody act like his performance was the reason we lost? (not saying he played well, but I thought he was far from the worst player in that match)

What is it with us and having absences from key players in the same position. A couple of seasons ago it was all 4 full backs. Last season out CBs as well.
I know we have more than our fair share of injuries, but if that has to continue, can they be a bit more spread out across the squad, please?

Not worried about this.

Not worried about getting any additional players in as well. This squad has loads of goals in it just think we need the right midfield pairing to stretch the field of play is all.

I will like to see Chambers given more games. Experience,so valuable,is a process of more participation in an act of a particular thing. So participation is a means to an end;whereas,experience is a an end it self.

Chambers will need more games to display his potentials which caught the fancy of Arsene. Taking risk is part of management though,risk taking this time around won’t go down well with fans,but it is inevitable!

F*** her right in Debuchy

Debuchy to partner gaby at the back then?

He caught a Big Fucking Germ……