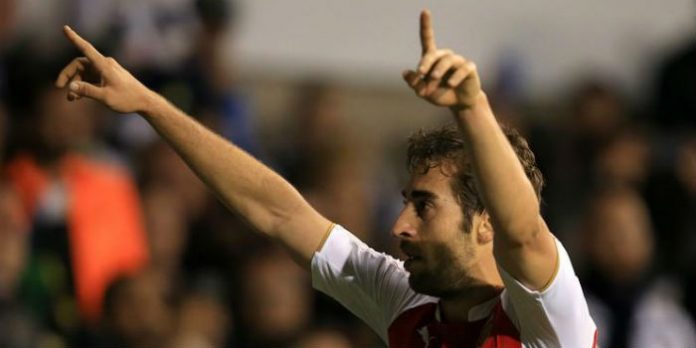 Arsene Wenger hailed the fighting spirit of Mathieu Flamini after the midfielder came out of the cold to net a decisive brace against Sp*rs in last night’s 2-1 Capital One Cup victory.

The 31-year-old, playing in his first game of the season, chanelled his inner Ian Wright to give the Gunners a first half lead before smashing home a glorious volleyed winner twelve minutes from time that had the travelling fans in raptures and the scorer pounding his chest in excitable defiance.

“You do not expect Mathieu Flamini to score two goals,” noted the boss afterwards, seemingly in awe as much as the rest of the football fraternity.

“He was certainly frustrated for a long time and he went for it. He scored two good goals, especially the second one. I think on the second one he made an early decision to go for it and just focused and finished with a great goal.”

Flamini was one of a number of changes from Saturday’s defeat to Chelsea and the boss was full of praise for the way his compatriot took to the task of muzzling his opponents.

“First of all I wanted to rotate the team a little bit,” explained Wenger.

“He had worked very [hard] recently. I saw in training he was focused and had come back to a good level and I also thought I wanted to strengthen a bit the midfield with Arteta who had not played in a long time.

“I wanted a second player to strengthen a bit defensively and that meant Flamini and Arteta together gave some defensive guarantees.”

Given Flamini had been tipped to leave the Emirates in the summer, last night’s goals – which undoubtedly sealed him a place in North London derby folklore – were all the more surprising. On the subject of keeping a player he’s signed twice, Wenger said:

“He is a fighter and he is a winner as well. I told him at the start of the season it might be difficult for him to be a starter but he decided to stay and he did fight.

“I fought to keep him but he is at an age where you always consider what it is important at that age, which is to keep focused and stay in the team. If they do not manage to do that it is better you let them go, but he wanted to stay.”

Own Goal is a turncoat and a snake. They even celebrated against us.

Well at least it beats the patronizing non-celebration.

The second should win the ‘goal of the month’

But lets be honest, the game was short on quality and up until Flam’s second, Spurs were controlling the midfield, which is worrying as their midfield consisted of Carroll and Dier.

I personally didn’t see anything that made me feel confident that we’d be in particularly good hands if Flamini and Arteta had to be played for an extended run.

Flamini is a good back up .

1. Can we make Flam the finishing coach because even the first goal was quality, need more strikes with that kind of conviction.

2. Can we make Flam the movement coach, I was baffled to see him as the one to be darting into the box on the off chance of a spill. Who knew commitment could pay off!? Seriously, our CM was the one found near the box for those opportunities, the fowards should be copying this.

Maybe watching the game again will change my opinion. Right now, I would rate Giroud 2 out of 10 – he seemed, in my eyes, the worst player on the pitch. – Flamini’s 1st goal was against the run of play as the ball never stuck upfront. Giroud did not even run into the box to investigate potential fallout from Ox’s shot. – Giroud was constantly complaining and standing stock still when dispossessed while his teammates ran hard to fill up emerging gaps. – Even when nicely set up by Ramsey (?) just outside the 6 yard box on his… Read more »

Girouds hair was all over the place to… Man, he must definitely have some confidence issues

you’re actually bang on. how man ytimes you see opps like that first one either dinked wide, or blasted over the bar. he just buried into the roof of the net. his movement to get in their was exceptional. the second he realised Ox was about to shoot he turned and sprinted at the keeper. really it is basic professional footballer stuff, yet its rare to see it executed so well.

I would say he is probably one of our better options at striker 😉 along with Calum Chambers. At least both know how to put the ball in the next. If you get Chambers near the opponents’ goal instead of our own goal his own goals will actually be proper goals and Flamini in 52 minutes had as many goals as our top goal scorers Walcott and Giroud this season. A front two of Chambers at striker and Flamini at attacking mid could be quite high scoring.

I think it’s only fair he gets the opportunity to start alongside Cazorla at the weekend if Coquelin is still injured.

He can provide the resolve and resilience we need away from home because Leicester are currently no pushovers. Then on 70 minutes or so if we’re comfortable and controlling the pace, we can bring Arteta on to maintain our position.

With all due respect, captain or not, I don’t want arteta in midfield, sub or starting. I’m in a bit of disbelief he’s still at arsenal. I think he’s done a great job the last 2-3 years. But honestly, he’s not up to it any more. Legs have gone. At worst Flamini at least has his engine and can still hassle players. And of course 25 yard volleys!!

It was the hard work done by Arteta and Ramsey that allowed The Flame to get forward
for both his goals.
What a result from probably the least creative side we’ve put out in ages.

Bring on the Foxes!!

Two good displays by Arteta and you won’t even want Carzola in the club anymore.

i thought arteta was our weak link. i love the guy, but it was hard to watch a times.

He may lack some ability, but his spirit is unquestionable. He, more than any other player, epitomises the fighting spirit of the ‘invincibles’ era. Alexis too has it and the signs are good for Gabriel – loved the way he stood up to Costa.

Standing. Up to him with a shitty back heel? Viera would have taken his head off.
As for Sanchez and fighting spirit he does chase the lost cause butnnotnsure if we are losing he would stand up and drag usbto victory. Not sure any of the team would.

Flamini seems to be the only one who will genuinely get fired up if his team mates are doing poorly. The only problem is he’s not good enough to play for us.

I really think it’s awesome that he said he wants to stay despite not being first choice. That’s what makes the team spirit and depth so encouraging. Of course you always want better players, but sometimes having players knowing their role can help as well.

Flam always stays until his contract is up. That’s how he rolls.

It wasn’t a dream…

With Cazorla suspended, should he be given a start on Saturday against Leicester? I think it’d be a deserved reward for his excellent performance yesterday.

Ah ok, thanks. In that case, I can’t really see it happening for Flamadonna just yet. Nonetheless, and I know I’m stating the obvious here, but it really is great to have players show their worth in that manner; pushing everyone else to improve and work harder at retaining their place in the team. Time for some momentum Gunners!

Such a marked difference between two Mathieus who both had a point to prove today. Debuchy – pipped by a youngster – playing like he didn’t care, letting his unhappiness get the better of him. And on the other hand, Flamini – written off by fans and clearly irked by media stories – using that emotion to produce an unbelievable all round performance, not just the goals. His positional play was good and he won lots of headers. He used his anger to prove everyone wrong, whereas debuchy seems to have given up. Massive difference in attitude – debuchy should… Read more »

In fairness, I think Debuchy also struggled physically. He looked out of condition – not that surprising – and was up against a very speedy left-back. He also got very little cover from Campbell or Ox.

But I agree he didn’t have a good game.

I don’t think Debuchy didn’t care, I actually think it was the opposite. He’s so desperate to get back in the starting 11 that he’s trying too hard, trying to make a telling contribution going forward and getting caught out defensively as a result.

Yes, I agree with this

Fan should understand Debuchy came out of injury prolonged by the summer then didn’t get his place back. This is football, the best must play and you don’t stop the progress of a young player who is on fire. These games are the first competitive games Debuchy got since his last injury. Even last season, he played very few games due to two bad injuries. Why are people blaming him for being ill-fated ?

I thought Flam had a good game because he had a covering midfielder in Arteta behind him. I think Flam struggles as the holding midfielder, but with a little more freedom to be more of a box to box midfielder he showed last night that his energy and passion is a real asset. To me he showed he’s a viable option alongside Coq against lower teams. and in the Cups. I also didn’t think Debuchy was as bad as everyone’s saying. His positioning was poor, but his work rate and tackling were good. Some time assessing the video today and… Read more »

If only the four are in discussion, it seems to me Coquelin’s more likely backup is Flam as the disruptor, with Arteta as backup to Cazorla as organizer and holding role, based on playing characteristics and style.

From my armchair I’d say Flamini-Cazorla would be a better like-for-like than Arteta-Cazorla. But then there’s Ramsey, if he’s not on the right.

Flaminis first goal out of a rebound is an example of why Arsenal players should just shoot sometimes.