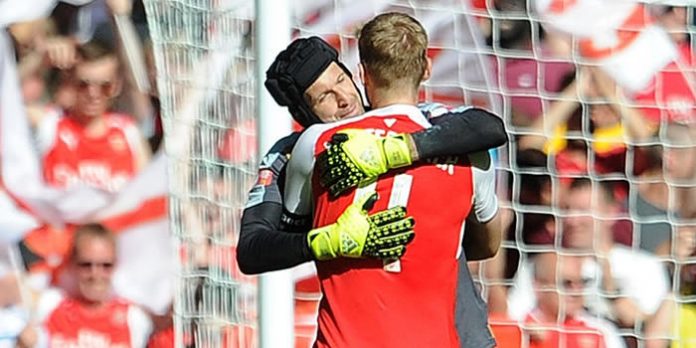 Arsene Wenger has updated on the latest team news ahead of tomorrow’s Premier League clash with Chelsea.

The Gunners meet Jose Mourinho’s side in an early kick-off at Stamford Bridge, and Per Mertesacker could come back into the squad after an absence of over a month (including an Interlull). The German last played in the 2-1 win away at Crystal Palace but has been suffering from a serious chest infection since.

However, the manager believes he’s still not quite ready to play, meaning Brazilian Gabriel will retain his place alongside Laurent Koscielny.

Having been left out of the midweek trip to Zagreb, Hector Bellerin and Aaron Ramsey return, with both expected to start tomorrow.

Other than that there are no fresh injuries to contend with as Jack Wilshere, Danny Welbeck and Tomas Rosicky remain chained in the basement greedily sucking on an ether-soaked rag as Dr Sawbones O’Toole has at them with rusty implements.

Danny Wilshere – he’s the best bits of Jack sown on to the best of Welbeck. And I have it on good authority that the doctor recently bought original manuscripts belonging to the famous Dr Frankenstein at auction. Happy times ahead. Come back Diarby we can fix you now.

Danny Wilshere – he’s the best bits of Jack and Welbeck sown together. I have it on good authority that our doctor has a fascination for antique medical memorabilia. I hear he recently purchased the manuscripts once owned by Dr Frankenstein at auction.
Come back Diarby, we can fix you now!

The Arse in the Gamb
Reply to  Arsical

The best bits of both? So This Danny Wilshere character will also be goal shy.

While we’re sewing things, can we sew the ball to AOC’s foot?

Haha someones made your idea into a animation! https://www.youtube.com/watch?t=91&v=1PoGmlxKhPw

Who the fuck is Danny Wilshere? Is he the best bits of Jack sown on to Welbeck. It the doctor related to Dr Frankenstein?

Smash those blue cunts at their place and Wednesday is forgotten.

I think that could work. Danny Wilshere and Jack Welbeck. Mix their attributes and get the best out of them! Injury situation probably wouldn’t change for either, though.

Danny Wilshere is the club’s first attempt at player splicing. Fast, technical and with great hair.

Does he have a cockney accent or Manc?

my name is my name
Reply to  Social Pariah

I hope Wenger gave his version of the hairdryer to the underperformers.

For us, the squad and the manager, it would be perfect remedy if we win tomorrow.

And who’s going to give Wenger a dressing down for the league cup team he fielded for a champions league game?

The Wenger version of the hairdryer treatment: “That was not good no? You guys need to work zis out” In fact, I would go so far as to blame wenger’s hairdryer treatment for all the recent misfortune. I have it on good authority he told the players several times to “take a long hard look in the mirror”. And Giroud,the handsome bastard, hasn’t stopped looking since. Misses trainings and pines away on the bench waiting for his next “mirror-fix”. Apparently he’s been heard talking to the mirror saying “mirror, mirror, on ze wall, who is ze most handsome one of… Read more »

It’s fair to say that the odds are stacked against us come tomorrow. They didn’t travel during the week, plus they got a morale-boosting win. We lost (albeit with ten men, I saw a sense of ‘fight’ that was rare in the past Arsenal teams). I will be satisfied with a draw at the very least. It’s still a Mourinho team. It feels like its going to be a blood bath come tomorrow. Forget the Community Shield. This is a different game altogether.

I think Gabriel is gonna give it to ’em good too!

The Only Olivier is Giroud
Reply to  InjuryGod

This fight you saw… tell me more. Would love to know which pubs to avoid.

Andre Santos
Reply to  The Only Olivier is Giroud

You talking about me? Am right here. I can score goals. Just tell Wenger to ring me up.

Per Bellerinesacker is a terrifying prospect. Like a charging giraffe with jokes accent

If Chelsea think their troubles are over because they scored 4 against a very poor Macabbi team, then tomorrow will bring them back to earth. Mourinho is in a dillema: does he play us with that same team (without Willian), or does he revert to the rested players? Both are risky propositions. A blend of the two is most likely. Arsenal, on the other hand, are going to make six changes from the team on Wednesday. They are going with a steady 11 that made Stoke look like part-timers last week. I see us coming out of that game with… Read more »

They’ll play Willian for sure. All the energy types to sap our 10 men away midweek pegs out.

I’d take a draw now for sure tbh. Hate to say it because I just want to rub Mourinho’s face into it with a loss for once.

Willian is injured, no?

Yes he is and definitely out. Pedro is doubtful.
Terry, Ivanovic and Fabregas are also injured – they are carrying mental knocks that leads to confidence loss.

I guess most or us like a little Jack and Danny..

Giroud to score a 30-yard screamer in the 89th minutes to make it 1-0 to the Arsenal!

Danny Wilshere – is he the new deadline day striker signing that we all have been waiting for, since the window closed almost 3 weeks ago ?? Looks like Wenger did have an Ace up his sleeve. 😉 😉

What exactly are we realistically hoping to win this season?

Enough games to get us into the top 4.

I wish fans & pundits would shut up with these excuses about how Chelsea didn’t travel mid-week / caught a morale boosting win! They are last seasons champions and They currently sit just above the relegation zone on 4 points. The pressure is well and truly on them, not Arsenal. Arsenal, please forget what happened mid-week and move forward with a convincing performance.

I’m well fed up with thinking a point against those blue cunts is a good result. In fairness, it is when thought of rationally, but good lord the two Manchester victories last season were so sweet… so amped for tomorrow. Come on you Gunners!

Thank you all for your patient, understanding remarks about the typo in the above story.

Please rest assured that, like you, we hope Tomas Welbeck, Danny Wilshere and Jack Welbeck recover as soon as possible.

Gabriel v Costa could get a little tasty.

Gabriel v Costa. Could get ugly

Who is the more gruesome of the two?

I think Gabriel (or Dwayne Dibbley if you prefer) is probably scarier, but is he uglier? Costa looks like a Neanderthal who’s been repeatedly stung on the face by bees.

Gabriel is silent phsycopath type. Whilst Costa is more like jackass thug who look for fights at avery chance.

What if he had a concealed blade in the toe-cap, like James Bond?

for the tomorrow’s game, I totally trust Gabriel to deal with that stubborn Costa.it’s hightime we stop being childish against rivals.if they want fight please remember flamini (it’s not a big job for him ) .

Chelsea – Blue waffle.
Nasty infected cunts that no one wants to go near

As usual the main decision for Wenger is Giroud or Walcott up top as the rest pretty much picks itself. Does he go for a player more in form (Walcott) or Giroud who has been really struggling thinking that Chelsea may pack it in against us which is not Walcott’s type of game? Any idea when Rosicky will be back? Hard to believe Mertesecker still isn’t fit after such a long time being out sick, but even if he was fit Gabriel certainly is in good form and will do fine tomorrow. Chelsea will be missing Pedro and William which… Read more »

Danny Wilshire has nothing on Santi Coqsacker.

Gabriel v Costa will be an ugly fight and Costa will get sent off ha! Come on you reds!

If we beat Chelsea it will be beyond epic. I saw Ranieri’s interview about paying players with pizza. He was so happy. Such stark contrast to Wenger usually who seems like a crackhead chasing that high one more time (of the league) to no avail, face all gaunt and pale. We’ve been in the doldrums for a while now. Okay we won two FA cups but in the last three years there are always points in the season where everybody is really down. I think it’s time for these players to show us if Wenger’s faith in them is justified… Read more »

Something tells me the game will be over in the first half. I sense a three nil win all goals first half with Sanchez getting a brace

Chel$ki – a team of cunts, owned by an oil cunt, captained by a huge cunt, and managed by a massive cunt. I hope we fucking destroy them. I hope we beat them so fucking bad that Moronho gets sacked and Terry commits suicide. That’s how much I hate those fuckers.