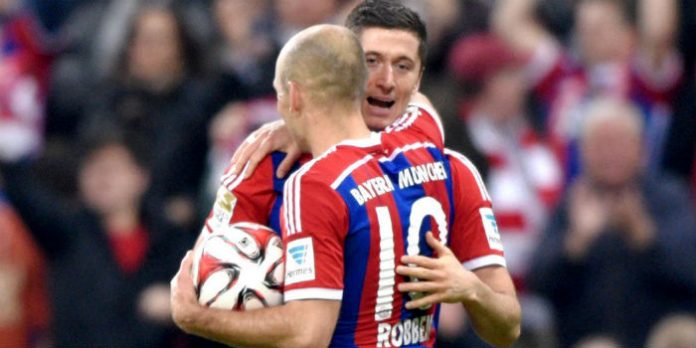 Over the years the team at Arseblog News have made no bones about our collective dislike of Arjen Robben…it, therefore, grates a little to hear him say nice things about Arsenal and Arsene Wenger.

In an ideal world, he’d spout misguided derogatory nonsense and then we’d beat Bayern and bask in the joy of ramming his words back in his weird shaped face.

Perhaps the Dutchman is just feeling cocky because his side is killing it in all competitions while the Gunners have thus far played like maimed donkeys in Europe.

“I haven’t got a problem [with Wenger],” Robben told the Telegraph, despite being accused of diving by the Frenchman when Arsenal last faced Bayern.

“I think he’s unique. To be there for such a long time you are doing a lot of things very, very well. See the players who became better.

“Look at the way Arsenal has developed. In Holland or Germany, they always talk positive about Arsenal. Why? The way they play, no negative football, always positive technical football, wanting to make the game. I think that is big credit to him.”

“I think they have got enough quality,” he continued. “I thought last season they did very well. They won prizes; the FA Cup and the Community Shield.

“They looked very stable and this year they look very strong. I was really surprised to see them lose two Champions League games but, on their good day, I think they can beat any team and we have to be aware.”

Robert Lewandowski, a man who has scored more goals this season than there are stars in the sky, is also wary of Arsenal. That being said, the Pole is also anticipating an open game given the Gunners proclivity for attacking football.

“We are looking forward to this match and Arsenal remain a very strong rival,” he told UEFA.com.

“They haven’t got a point in the Champions League yet, if I’m not mistaken, and they urgently need to start grabbing some. It won’t be an easy opponent to beat.

“Sometimes it’s easier to face a team that enjoys a passing game and who doesn’t just park the bus and defend all the time.

“It might be an interesting fixture and I hope Bayern will be victorious.”

If they are victorious Arsenal will be staring down the barrel of a first Champions League group stage exit since 1999/2000. That was the season we dropped into the UEFA Cup and went all the way to the final before losing to Galatasaray on penalties. Meh.

L’Equipe: PSG back in for Alexis Sanchez

No doubt that Robert Lewandowski is the clear and present danger for us tomorrow night. Massive test for Koscielny but one that I believe he can pass. Feels like one of those symbolic matches that might be a barometer of our progress as a club. Hard to believe most of the stuff in the press about us fielding a weakened side, that isn’t Wenger’s style. Three full days is ample to recover for Everton on Saturday afternoon. It would be preferable to end 4th as opposed to 3rd in our CL group so that we have more rest in between… Read more »

Robben is a flog.

Robben is a true gentleman.

Robben has 12 m/S gravity on Terra during the Arsenal games or as a great philosopher once said Robben is Grass, Grass is Robben

That AND he’s a diving cunt!

Going by our last 2 matches in the UCL..

you do that this time good sir

I hope it’s not the usual story in a must win game – red card, injury sometimes even an own goal! The last few performance have been quite matured, hope they continue in the same vain. I would prefer if we qualify from this group, even if we don’t win it. The 2nd tier European league might offer some of the fringe players more playing time but we don’t have enough of those players. The season has proved to be a long on for us the last few years, that participation in lower European league will be like settling for… Read more »

You just know someone will be sent off. Someone always is in these big games. Refs want to make a name for themselves. Quality of referring in Europe is awful.

whenever i see Robben, I’m always brought to mind of some WW1 documentary, with Robben being a crook-toothed knock-kneed Tommy Atkins grinning at the camera, before immediately falling over after going over the top and appealing to the ref. Or something like that. He looks about 90.

Although Robben and his subhuman scum diving antics can feck off.

If we don’t beat Bayern at least once, I hope we finish rock bottom of our group so can concentrate on winning the league.

Saying that I do want us to go all out and try and qualify as it’ll be a huge mental boost to the players and will hopefully help us maintain the form we’re in.

Arjen robben is a patronizing cunt.I rest my case.

Was Robben ever been a Chelsea player? That might have been a reason why he’s been an arse all the time.

You get a thumb up just for your user name

To be honest i don’t really mind going to the UEFA cup. The likes of chambers, ospina, debuchy, gibbs, ox, campbell, wilshere and welbeck (when they come back) need game time so they can be ready and match fit when needed.

My thinking also; but the little snag is that no matter the team we put out, our league matches will be moved to Sunday or Monday. This means that your rivals play before you and this could bring pressure depending on results. I remember when we clawed back a 10 point deficit by Spurs; it was down to us always playing before them while they still Europa games to take care off. The pressure of winning everytime we do became unbearable for them. Can’t say it was down to that alone, but it sure played its part. So for me,… Read more »

Completely agree, & to be honest i don’t really mind going to the UEFA cup either. We’re not going to win the CL this year (if we’re all honest). Believe that whilst we’ll give them a run for their money & be their strongest opponents, City will clinch the PL this year. They’re just too strong. Win the UEFA cup, win the FA cup for a 3rd year, 2nd in the PL, & be the team to be recond with next year. COYG!!!

Sadly I have to inform you that off the pitch Robben is an intelligent, charming and thoughtful man. When a journalist friend told me this (after he interviewed him) I was devastated – and so was he! Much worse finding out that a player you loathe is actually quite nice, than the other way round.

Thankfully in the same conversation he also confirmed my opinion about John Terry. Phew!

Literally have never heard of them until like two days ago. Harmless continental rabble from what I understand. They should be honoured to have the opportunity to play a great club like Arsenal.

Lewandowski streak ended at 15 goals in 6 matches for Club and Country when he failed to score against Bremen. Alexis is still on his streak with 10 goals in 6 matches. Let’s hope it continues against Bayern. Maybe make it 13 goals in 7 games?

That’s right. You both better be scared and shaking in your boots!!

If Robben played for us you’d think he was a genius. He’s actually one of the more agreeable people in the Dutch team.

I thought he was injured anyway?