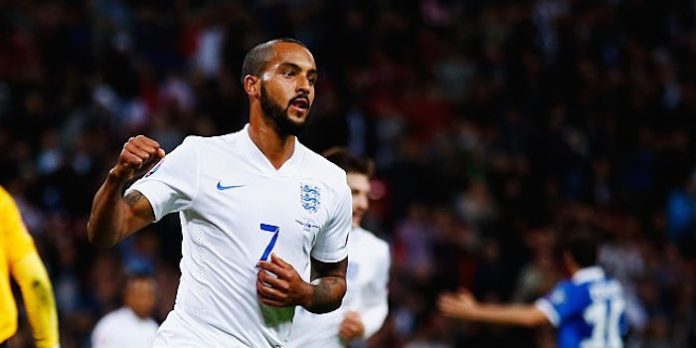 Theo Walcott and Santi Cazorla have had successful evenings at international level with goals in their respective games.

Walcott opened the scoring for England in their 2-0 win over Estonia, while Cazorla scored twice for Spain as they beat Luxembourg 2-0.

Their goals follow Alexis scoring for Chile as they beat Brazil last night.

You can see Walcott’s goal here.

agreed! That was an amazing run, especially the timing. Well done Feo!

Anybody else noticed that Gareth Bale looks like Cheetah from the 70s Tarzan series?

Great touch and turn by Walcott and what a sweet sweet hit by Santi !!

Theos goal doesn’t surprise me… But hopefully Santi’s brace will get the ball rolling for him in terms of goals for us. COYG GET BACK SAFE

Arsenal Gent. Is that you?

WHY CAN’T SANTI DO THAT FOR US

Because with so many other players scoring for laughs right now it’s nigh on impossible to get the boot in. Even for someone like Santi.

All of shitty’s players are getting injured. Please god let alexis survive…

Thought they were going to rest Alexis?!

That was resting Alexis. After he scored in the 89th minute he decided that in the interest of match fitness he would only jog at a moderate pace for the rest of the match.

Sanchez, Cazorla, and Walcott all score. Gotze, Silva, and Aguero injured. Not that I wish harm on players but since we face bayern soon and man c the only team ahead of us, I can’t help but smile. Finally an interlull that brings some Joy.

All that’s required to make it perfect is for Ireland to fuck up Lewandowski on Tuesday.

I wouldn’t like them to have any excuse as to why they lost.. we’re waiting!

So Spain only beat Luxembourg 2-0??

Ozil lost against Ireland though. He still had 92% passing, a key pass and a goal ruled offside so he must hate not playing with his awesome Arsenal team mates.

Mesut Özil also scored, but one of his team mates was offside, so his goal was cancelled. But he was among Gunners who netted the ball, anyway ?

He himself was offside when he scored. Germany seems unbalanced. They need a proper striker, not Gotze up top.

Arsenal players has now gone goal crazy!!…..scoring for fun!
To think i was upset for us not buying a striker in the transfer window?

Brilliant that he is playing so well, but you have to worry if he gets injured. Arsenal’s success recently has relied on the pace and movement of Walcott and Sanchez to open up defences, and also making the most of the supply of passes from the midfield. We do not have any suitable replacements for these two and going back to Giroud would seem like a step back now.

Whoa! Easy with the jinxes!

The test for Walcott will be how he reacts when the streak ends, hope it doesn’t. We’ve seen how sanchez can cope admirably. OG gets moody. ? is suffering a complete loss of confidence plus he no longer puts in the defensive shift.

I miss welbz and little mozart

I love how Theo looks like he doesn’t even wanna touch Harry Kane…. Most distant hug ever!

Santi shooting LOW? He could be onto something here!! 😉

Where is Danny in this whole business? I know he is injured and had an op buy when can we see him again turmenting them back lines?

I’m sorry but according to media, we are supposed to be struggling for goals this season. Poor bloody media, bunch of mug (mashers) They’ll be all over themselves with how Klopp is going to revolutionise the world now never mind Arsene has beaten him tactically and he mucked up and entire season in a far easier league. As for Theo, as I mentioned before it is never a zero sum game. As Wenger has mentioned (as he had with Henry), Walcott can play at CF. But he played RW to good effect and a goal against Estonia so clearly we… Read more »

Although the fuck-wits…… sorry, the commentators made comment that it wasn’t a great game against Estonia and obviously they didn’t often find the final pass/ finish, but I thought it was a much better game than usual. They seem to be passing the ball so much better when Shrek isn’t screaming for the ball all the time. More flicks, back-heels and nice touches than I’ve seen in an England team for a long long time.

Can’t remember so many goal scorers from the Arsenal team during the interlull! Theo, Giroo, Santi, the Ox, Rambo, Alexis, even Chuba… assist from Ozil as well! Fingers crossed all return fit and well! Praying for Alexis specially!