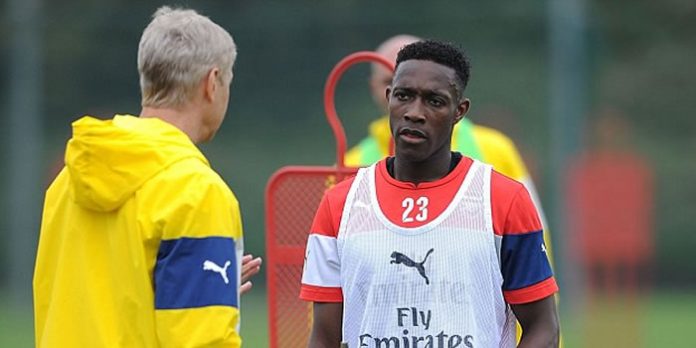 Danny Welbeck says he’s hoping to return in the New Year as he recuperates from the knee operation he underwent in early September.

The England international hasn’t kicked a ball in anger since picking up an injury in late April and he admits that he’s found his lengthy stint on the sidelines very frustrating.

Currently visiting Arsenal’s youth projects out in Dubai, the 24-year-old striker told local paper The National that he’s edging closer to time on the pitch.

“It’s difficult to put an exact date on it [his return], around the New Year. After I had the operation I was in a leg brace for about four weeks, which wasn’t easy.

“I had to do a lot of machine work, about six hours a day. Sleeping in a leg brace isn’t good. At night it’s not comfortable; it was the first time I slept on my back in years.

“It’s good to finally be out of the brace now and walking. It feels like I’m getting that little bit closer to getting back out on the pitch.”

“It’s frustrating being on the sidelines and watching in – you feel kind of helpless. But you just have to keep motivated. The appetite’s there, you just want to get back out on the pitch and show what you can do. So it’s difficult but you’ve got to see the positive side of things at times.

“Obviously there are some days when you just want to be back out there playing, but it’s a process and something that I’ve learnt to deal with in time. But it’s hard.”

While Welbeck’s been stuck in the gym the Gunners have moved up the Premier League table to second, just two points behind current leaders Manchester City.

The striker says it’s a promising state of affairs but believes the squad can still improve after some inconsistent results this term.

“The most important thing, obviously, as a team and as a squad, we want to keep on improving. The way we’ve started the league we’ve had a few good results, but there’s also results where we could have done a bit better in certain situations.

“The most important thing is we improve on what we’ve got to set a standard. We’ve just got to keep on improving as a squad mentally going into games, making sure we’re right for every single match and not just on selected games.”

Even once back he is going to take a while to get into form. I’m not getting excited.

Though feel free to get excited now, two to three months before he is back!!

I’ll wait until he is back and playing well.

I miss Dat Guy.
I miss Arsenal…
I am so bored of this international break.
Bored beyond all meaning.
Its so typical, we totally destroy United, and dare I say, hit a bit of form in the league.. and then boom. International break.. *tumble weed* ‘blowing around.. momentum lost.

Meanwhile the little boy just knocked the Dutch out by scoring an own goal.
Karma is a bitch.

What a back/up spine we have waiting to propel us to the league & fa cup double from January to May!

jimbo1
Reply to  Me So Hornsey

Don’t forget the Europa League and Capital One Cup.

What’s with all the thumbs down? Don’t Arsenal fans want to win every competition the club enter…and EL is far more realistic at this juncture than CL.

In the meantime I will apply the mean method of averages and say he is 25.

Now for my less pedantic comment, it’ll be great to see him back. He has a great engine and with some touched up finishing technique he could become great. Get back soon, Danny. Make it a happy new year.

He was 26…but as everybody knows when you’re injured you get younger in football years.

I heard Wenger is about to sign a 12 year old wunderkind from Marseilles called Abou Diaby.

It’s an interesting combination, I suspect most would rather Ox to Welbeck on the right. Or Walcott wide and Welbeck in the middle. Anyway, glad we have pacy options!

I personally prefer Welbeck on the right to Ox. He is more astute defensively than Ox is. The manager also seems to prefer wingers who move inside to create an overload in the middle and at the same time open up space for our full-backs; a fine example, our first goal against United. Ramsey ran inside while Bellerin overlapped to the bye-line. Same thing on the left with Monreal and Alexis (Our 5th goal against Leceister by Giroud). The manager doesn’t seem to trust Ox yet if current selections are anything to go by. Welbeck is better in my opinion.… Read more »

Welbeck in the middle ? Nope !

Will be great to have him back for the post-Xmas title charge. Showed some very promising signs in his first season with us. Get well soon Welbz

Get a grip, mate. Nobody plays ’em both.

love this guy… great defensive attacker. Terrorises Defenders and helps out our defenders. Hope he comes back with a bang cause we need him!

Thats going be like a new signing in january…………….you know thats coming from Wenger

‘First time I slept on my back in years.’
What an animal!

Looking forward to when Welbz is back to form, now with actual competition up front (meaning Walcott playing well and forcing Giroud to the bench, rather than Giroud start every game regardless of form) there will be a real opportunity for each player to really HAVE to make their mark to make sure they get in the starting line up. Shame we have to wait till January (give or take) for Welbz to get back to it!

Off topic but am I the only one that gets really fucked off when commentators don’t actually commentate on the game, ie letting us know who has passed to who, who did that great clearance, who tackled who…instead they just talk insignificant bollox!?
Rant over.

with Walcott Wellbeck and Wilshere we’ll have the “W'” formation.
cant wait.

Waiting for Welbeck, Wilshire and Rosciky to get back in the squad soon. That is when Le Prof will have good options and can rotate effectively. COYG!

Van Persie has just scored his 50th goal for the Netherlands by heading past his own keeper into an empty net. Oh and this made it 3 -0 to Cech and Czechs to ensure we don’t see him at Euro 2016 either. So So Tickled

Unrelated but worth a mention – my thoughts are currently with the little boy inside Robin van Persie, who must currently be weeping deeply and profoundly.

News flash – Robin van Persie has been arrested for child abuse, after the little boy inside him complained to social workers.

Unless there are some injuries to those ahead of him (Ramsey, Ox, Giroud, Walcott) in the central and wide right positions I don’t know how much he’ll get to play to work himself back into shape immediately upon his return. With a long term injury you will often see a “tweaking” of the injury or something else muscular as one compensates or is rushed back too quickly. You see it often in many sports, not just football. The player who has been out so long is anxious to get going, but needs to be patient and take baby steps along… Read more »