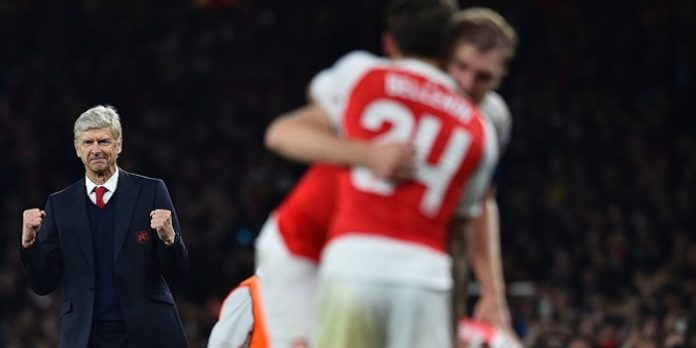 Arsene Wenger has hailed the performance of his team after the 2-0 win over Bayern Munich this evening, saying they had to be switched on for the 90 minutes to get the right result.

Two late goals won the game for the Gunners as they kept their European hopes alive, and as a collective performance it was one of the great nights at the Emirates.

“We had an absolute necessity to win the game,” said Wenger, “and we did it in an intense and disciplined way.

“It was a top level game between two top-level teams. Bayern had more possession than us but we decided to make it tight in our final third and catch them on the break.

“The last part of the game where we went longer and used long balls we could play more in their half and they struggled. I think they dropped a bit physically as well but overall I think we have beaten a very strong team and kept a good level focus from the first to the last minute and kept a clean sheet as well.”

He also revealed a tactical change which helped them keep things in control.

“I thought when we played very high up we stopped them from playing,” he said.

“When we were playing halfway they opened us up too much so I decided to drop Ozil a bit deeper and to make it tight around the box and catch them on the break because we have the pace to do it and to find some space with the game going on.”

And the Frenchman is hoping for a confidence boost after what was an excellent victory.

“It can strengthen our belief and strengthen the belief of people of around us, that means out fans, our supporters.

“We won 3-0 against Manchester United, 3-0 against Watford and 2-0 tonight so it is important we have a good balance between defending well and attacking well.

“As long as we defend well and score goals then the balance is right.”

Let’s hope we can recover in time for the game against Everton on Saturday.

Proud to be a gunner

Definitely gave everything for that brilliant win. Giroud was so intent on making up for his misdemeanors against Zagreb he sacrificed his face and hair to score the first goal. I won’t question your commitment anymore Oli

I showed intense discipline by not wetting myself with excitement.

Hector (because it can’t get anymore clear cut) Baellerin.

Seems more like the commentators’ attempts to pronounce the spanish ‘ll’ sound.

Hopefully there’s a real silver lining in having the ox step up to really own the right wing spot. Then Ramsey can be really pushed to get back to his ’13-’14 form, because if he’s playing like that, he should always start in any midfield.

Incredible depth we’d say, if it works out, but if it doesn’t, January will be an irksome month.

To be honest, the system works well right now where Ramsey is because in attack, he moves back into the CM spot to form a 4-3-3. This will create a balance there as he would enforce the midfield and still provide his bursting runs into the box from deep. Whilst Bellerin will provide our width as he is a better wing player. Having Ox there doesn’t fill me with confidence and we would have to change our approach which is working like a dream right now. With Ox, we cannot play the shift to a 4-3-3 in attack because Ox… Read more »

Hence the operative phrase, “step up.” I agree, but I also see no reason why the Ox can’t improve that aspect of his game as well. Ramsey was given more time on the right than anybody wanted, and now he’s enjoying the tactical awareness that comes with experience. I wouldn’t trade that experience for the need to train the Ox in game time, but it might now be necessary due to injury. Hopefully the Ox steps up.

Fabulous match, and the tactics were perfection personified. Fantastic job by Le Prof.

Proud to be a gunner any day! COYG!!!

Well done Arsenal fantastic result. Every player played well. But I have to say how good is monreal 10/10

Cech was the game-changer. Szczesny, Ospina or Fabianski, we lose that game.
The defence as a whole stood up to be counted.
We are going to have much of the same in Munich on November 4; we use the same template, who knows. We may just do the double on Bayern. I believe.

No, I think we have a different game plan in Munich. You never run the same tactic twice in a row.

I don’t see Bayern playing anything other than possession football. Except you want us to try and go toe-to-toe with them which would be siucide in my thinking. So we sit back, close the spaces in front of our back four, make Muller live perpetually on the touch line like tonight and catch them on the counter.
We will get chances like we did tonight; only that we need to be more clinical.
We can do the double. I believe!

I’m not saying that we should go all out attack. I’m saying simply that our plan should be a little different. Maybe start the press five yards further up the field, maybe start giroud up front and Theo on the wing (assuming Ramsey isn’t fit). Small changes, not big ones – just enough to make it look like we’re doing the same thing, but we’re NOT doing the same thing.

Playing Giroud from the beginning in a game you hope to play counter-attack is like carrying a knife to a gunfight. Walcott all the way.

Bayern defenders aren’t all that good.. If Giroud is in the mood, he can scare the hell out of them with his physical and hold-up play. I for one think that Giroud is great option for defences like these. Thats the tactical choice Arsene needs to make and not me and thank god for that. It great being a Gunner right now 😀

Great performance to a man!

This team has matured into something special. Go Gooners!

This team is built for big games.

But Arsene doesn’t do tactics.

Surely he’s no match for Rock and Roll Klopp or La Pep.

Spot on tactically. Some commentator was going on about how Arsenal would tire chasing. What he did not realise was we were simply shuffling right and left expending little energy chasing because we sat deep with assets to hit on the counter. It was Bayern that had to do a lot of work.

Me So Hornsey
Reply to  santori

That was Owen Hargreaves, who had no idea what he was talking about. He kept saying to ‘press, press’ not realising this is exactly what they wanted us to do. Standing off, keeping compact shape and sitting deep worked perfectly, you could see Bayern running out of ideas as they kept passing from side to side and back to their CBs. There was no space.

assistantref
Reply to  Me So Hornsey

Hargreaves was still going on 1 minute after Ozil scored about what a great save it was…until his partner had to tell him to look, the ball’s over the line. Classic.

Hargreaves is a manure cunt. Pundits is overrated nowadays.

If you can beat Utd 3-0 and Bayern 2-0 in a season, there really is no reason why you can’t beat anyone. Consistency, luck with injuries and an increasing confidence and understanding between our players and we can really push for the title this year. COYG!

Neato gang! back to headquarters for debriefing and cocktails! one point i’ve always differed from wenger on was his release of eboue- i personally would have liked to have kept him around for just such nights, i don’t care that he’s 47 now and knows none of the lads, for some reason i just keep picturing his massive grinning existence only serving to amplify the goodwill- like bez in the happy mondays, only eboue. There should be a little statue of him that players rub for luck in the tunnel or something. So, as i said- well played lads!

ps anyone think there’s a chance of trying bellerin at rm with debuchy behind? very useful around the box, got a great finish and awareness about him, could be an option?

Why bother? Bellerin plays rm and rb at the same time.

good point assistant ref, i just see quite a few goals in the lad if he started higher up, could keep debuchy from throwing the toys out the pram with a few games, too, though the ox i suppose does merit some starts there.. One of my favourite players to watch in world football right now, and you can see the influence of arteta’s barber in his coiffure, which pleases me greatly.

Wenger unlikely to risk his two first choice right backs in one game, despite having chambers as a potential option.
Maybe an option next year in the unlikely event Debuchy sticks around to be the corporal’s deputy.

yeah that is true, never thought about the possibility of wrecking both of them!

who says Wenger doesnt do tactics?

2015 is the year we all will remmber as the pivot point for Wengerball. I would not have ever imagined Le Boss adopting park the bus strategy – and when he did, he did it with class and effeciency. It makes perfect sense because our forwards are like 90% built of speed and precision so decisive counter attacking should be a hallmark for Arsenal going forward. COYG!

Thank you Arsene.. 🙂 What a glorious night!

Great result. Now on to the Everton game. Keep the momentum going. COYG!

How far was Owen Hargreaves tongue up Bayern Munichs arse

When the chanting started after Giroud scored i got goosebumbs.

What an amazing performance last night. Really disciplined and focused. Our defence was extremely solid and once again, i thought Özil played fantastic. His reaction after the overtime goal was heart-warming.

Last night showed that Arsenal is not just a one-trick pony. We can play – and succeed – different styles. Great set-up and tactics from Le Prof

Leave your contemplation,Arsenal are winning the league!

I tweeted that,by wednesday morning,people would be talking about how we had destroyed Bayern and lot of people would lose their bets