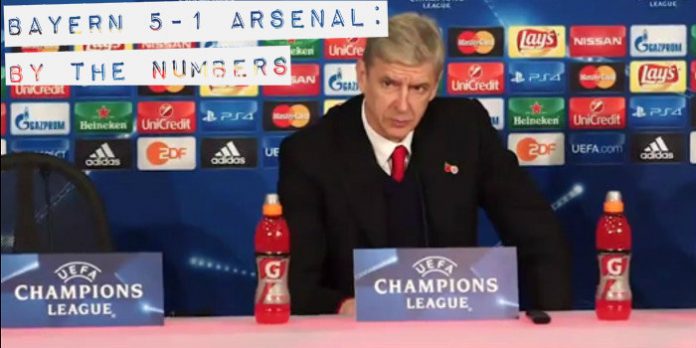 “First you have to give credit to Bayern for their quality. After that I think we made things quite easy for them with our defensive performance. We were extremely poor defensively and we were not at the races.” — Arsene Wenger, post match Bayern Munich

Wenger’s opening words of his post-match press conference presented a frank assessment of Arsenal in last night’s match. Simply put, Bayern outplayed Arsenal. But perhaps worse, Arsenal didn’t rise to the level of the competition and the result was entirely justified.

When I first started writing this column, oh so many years ago, it was common for Arsenal to dominate lesser opponents. I would write those columns in a sort of “stats bomb” style, meaning that I would simply gleefully point out every category which Arsenal dominated. They were typically passes, final third passes, shots, maybe a defensive stat or two, and almost certainly the number of clearances Arsenal forced the opponent into.

The closest analogy I can make, in terms of stats, is that Bayern beat Arsenal 5-1 in this match in the same manner that Arsenal beat West Ham 5-1 at home in the League in January of 2013. I don’t just mean in terms of the score line, Arsenal have had some great scoring matches since then, I mean in terms of every stat.

Arsenal didn’t do enough to win the ball back, they didn’t stop Bayern from playing, there was very little fight in the team, and as a result Bayern “Hammered” Arsenal.

Thiago Alcantara showed what a Bayern player can do when given freedom to run the midfield:

Yep. He was pretty much unstoppable. Well, he looked unstoppable. That could have at least partly be because Arsenal didn’t really try to stop him.

That’s all for today. Depressing result from Arsenal. More tomorrow.

Painful, not enough fight in the first half, we just sat back and didn’t get out. Second half looked a lot better as we had a threat, should have won the half.

It does highlight the value of the 4 missing players – Bellerin, Kos, Walcott and Ramsey.

All of them would have added something last night, particularly the pace of Bellerin and Walcott but also the reliability, solidity and energy of Kos and Ramsey.

Wow.. no offence but we as Arsenal fans are always good at making excuses, don’t we? As though the replacements for them were all totally inexperienced 16 year olds..

Let us face it, our playing style, approach and gameplan, and perhaps more than that, a courage and confidence are more vital when we face such opponents.

Is it just me or I think if we’re going to get knocked out of Europe, might as well be at the group stage? At least we don’t have to go through the agony of getting out at last 16 stage after losing 10 players through injuries.

Might as well get out of Europe early, have less games to play (and have less risk of injuries) and focus on winning the League, which let’s be realistic here – the league represents a much more winnable trophy then the CL

thearse4life
Reply to  Half cup full

Well, if we end up in UEFA cup, you’d expect us to get through another round or two at least… Certainly wouldn’t lighten the match load…

Damn. We need to keep our heads up..

I expected this all week. Was just hoping the coach would find a way to reduce the deficit. Subs as early as 15th minute for example.

The masterclass in goal keeping I thought Cech was gonna have as we nick a result didn’t happen, mainly cos his defence let him down. Let’s win the EPL. We can do the ECL next year

I wonder why our midfield was so disfunctional in this match? Coq, Cazorla and Ozil were all healthy, they should really gain more control and create more chances.

was on my way to watch the match at the pub, got an alert for the first goal in 10 minutes, turned and went home.. we are a team who lose their heads once we concede early( Chelsea last year,Liverpool etc). We need to work on being firm for the first 20/30 minutes then we’ll attack. let’s take it out on the S**** come sunday

Wenger and his “injury prone” performers were on show “to prove that they can at least compete against Europe’s top teams”. All Wenger’s words before the game. After the game the Circus Ringmaster(Wenger) and his Chief Clown (Mertesacker) blamed the performance on a lack of courage and poor defense. Well, who else could Arsenal have used in defense if our Manager regards our defensive personnel available as adequate during transfer windows? Not a word was mentioned about the total lack of leadership in the team. Debuchy was strongly supported by Wenger prior to the game. What did Debuchy show in… Read more »

The stat of 5-1 is supposed to get at me but being an Arsenal fan i’m almost expected to take in stride because somehow you are always convinced that we’re much better than this and things will be put right (they often are).

Now to me the day 5-1 victories for Bayern Barcelona will be aptly treated as a shock result is the day i know we will have made real progress.

Bayern are better than us man for man in every position, tje real shock was that we managed to beat them at home. They are in an elite of 3 clubs in tje world right now. 5-1 is not good enough but against this class of team it can (and did) happen (to anyone)

While I understand your point there are a few players of ours I would not trade for theirs. Sanchez, Ozil, Kos and Bellerin for example. Maybe Nacho on that list but again, I am probably biased.

Comment: Agreed, we have individuals to match them. But not nearly enough.

Inflicting a transfer window with no outfield signings on ourselves was an admission of defeat, but only in Europe’s much higher standard of competition. I always felt our top 14 players performing at near-peak levels could challenge for domestic honours, so this defeat just illustrated that. It does throw the abilities of our squad into sharp relief but I don’t think anyone’s surprised by that!

Tough result for the players and for us… but we’re still The Arsenal.