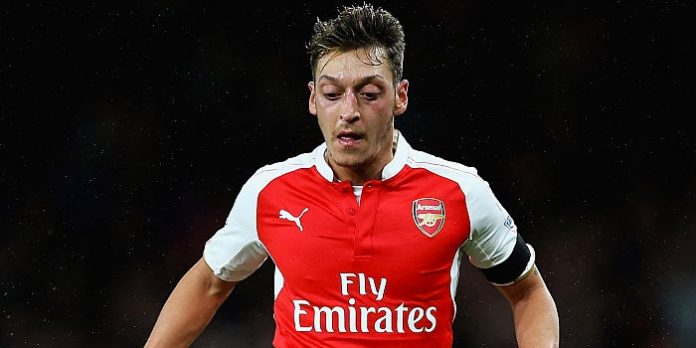 Philipp Lahm has called criticism of Mesut Ozil ‘laughable’, saying the Arsenal playmaker is the most intelligent player in Europe.

Teammates at national level, and obviously part of the same World Cup winning side in 2014, the Bayern skipper says that all players need time to get accustomed to a new style of football as Ozil did when he came to England.

Lahm believes that we’re now seeing the best of the former Real Madrid man, and praised his on-field awareness with and without the ball.

“Mesut sees things only he can — his vision is as good as I have ever seen. It was laughable when he was being questioned after his move to Arsenal.

“It doesn’t matter how good you are, everybody needs time to settle in a new league. Especially a league like England, where you don’t get as much time on the ball, and of course the game is a lot more physical.

“People don’t necessarily understand his game, he isn’t there to run at players or even beat them, he is far more intelligent than that.

“He finds space and creates chances for his team mates, and you only need to look at the assist table to understand there is nobody better than him at that.”

His praise was backed up by that of Arsene Wenger who backed his most expensive signing to the hilt.

“I think he’s developed himself well and has won a lot of self-belief,” he said. |The World Cup probably helped him too. Now he’s being recognised in England. Even in Germany, there was always a bit of doubt. For me he’s a super player, a big player and he has positively developed.

“He’s very intelligent and has worked really hard. I think he’s at the best age now, where you know the job, and know what’s expected. I think between 27 and 32 is the best age for a player.”

Let’s hope some of that intelligence and craft contributes to a good result for the Arsenal tonight.

Thank you Lahm. Couldn’t have put it any better. But in England where beating your defenders to the corner flag, long shot goals are much more appreciated than Rosickys or Jacks goal against Norwich then it’s no surprise they don’t think as highly of Ozil as they should be. In other words, fucking useless pundits, and sheep fans alike.

He isn’t there to run at players or beat them, he is far more intelligent than that.
This sums up Ozil to me. Players like Messi and CR have mad footballing talent, but what Ozil has is mad footballing intelligence, which is an equally rare atribute.

Agree with all of this. But you forgot ‘facking runnin about a bit’ and ‘them don’t like it up em’. 2 of the many reasons England will win precisely what the morons deserve. Nothing. Probably ever.

Been saying it since he joined, I never once questioned his attitude, his passion or his ability because it has never been a concern, only a concern to pundits who never played close to the ability that Ozil has. Just because an ex professional cannot see what Ozil does, doesn’t mean that the pundit is right and Ozil is wrong. He did need to adapt coming from the Spanish league where you aren’t pressed as highly in the Premier League, yes he did need to bulk up a bit to suit the physicality of the league and he got his… Read more »

Took the words right outta my mouths. Been repeating what you said to sheep fans on Arsenal fan facebook pages but they really are thick. Those lot are.

And Lahm is a great captain from a great side. Enough niceties. Let’s get to work and beat them again. Then the group will be wide open, with all teams (probably) on 6 points. COYG!

All teams on 6 points? That would be great, but I don’t fancy Dinamo to win away to Olympiakos. It would be great if they could get a point though – that would be even more useful to us than getting a point in Munich ourselves.

But.. But the great Michael Owen said that he’s nicking a living and sterling is much better than him. Surely he can’t be wrong.

We’ll have to ask John Terry if he respects Owen.

If he does that proves something.

Toast with Butter and Jam
Reply to  Pedant

A kick in the Debuchy
Reply to  Bosscielny

In his defense, I’d say Michael Owen may actually qualify as an expert when it comes to ‘nicking a living,’ that is if one were to review his career since, what, Madrid? I’d say someone is projecting.

Though I should say Debuchy – Campbell is not how I envisaged our right side going into this game.

Why the thumbs down? Were people crying out for the Debuchy – Campbell axis 2 weeks ago?!!!

I imagine özil doesn’t see the world as we do! I heard from a friend of a friend he had a terrible accident as a young boy in Turkey and he moved to Germany to have robocops vision inserted!
It still alerts him to target the bad guys (Maureen,Terry,Owen) but the kill chip was removed! (Sadly)
Anyway I’ve had to much red bull so I’ll be off and away now!
Up the Arsenal!!

True stuff. I like that it pisses him off when someone is not on the same wavelength as him even Aelxis!

Does he not understand that he alone can see the 360° pitch angle.

http://untold-arsenal.com/archives/47768 he is top of the table this season.

Ozil is a luxury player, a passenger – Gary Neville

Ozil is a flop – Robbie Savage

The halitosis must be unbearable! There has got to be some sort of “twat comment of the week” bonus! I have long thought that it would be awesome if one could silent the ‘punditry’ but still hear the atmosphere when viewing games on the tele.

In fairness, Ozil has definitely struggled here and there since he’s been with us. It took him time to settle, and occasionally he did massively go missing.

BUT, now I would happily let him impregnate me. And I’m a dude.

He is unstoppable. A footballing poet.

There is one word to describe him: Bloody Genius. Oke that’s 2 words, but you get the point. Being non British, it often annoys me when I watch both commentators and pundits alike keep bleating on about physicality, strength, power, speed, pace etc etc etc. Not once have I ever seen them appreciate an intelligent player. They would rather sing praises of James Milner or Jordan Henderson, than of Mesut Özil, cause the former 2 run like headless chicken all over the pitch. No wonder the British teams fare so badly on the international stage. When they face technical teams,… Read more »

With Ozil, upgraded on Fabergas!

I bet there are still loads of Wenger out wankers still beating the Ozil isn’t good enough drum . Bellends.

you totally destroyed your imaginary enemies!

really though, what’s the point?

Never doubted Ozil for a minute. Ozil and Sanchez are our Bergkamp and Henry. Not exactly the same type of player, either of them, but the same level of quality. I love them both, Sanchez is a pitbull and Ozil is a genius. Can’t wait for Sanchez to get his top form back. If he does for the second half of the season, which I think he will, and Ozil stays fit, we might just beat city to the title.

My son shall be named Thierry

Don’t ignore the kilometres he runs. Since that last injury he is very high up the mileage table

Ozil is like the glimmer man: he’s so amazing you don’t see how fast & clever his moves are.

Mezut makes the Hadron Collider look like an expensive doughnut;
and Hector could run rings around it!

Funny how everyone inside the game respects Mesut massively.

Name a current footballer or manager and I guarantee he would hold him in high regard. Even mourinho, for fucks sake.

But surely Durham and Ashton know what they’re talkig about?? Cunts

He is on form this season which is great and he is starting to show up for the bigger games. Previous seasons he was inconsistent so criticism at that time was valid IMO

Nope, he was slightly “inconsistent” in his first year, with injuries and getting used to a different league and different surroundings, which is to be expected. He was very good last year, only Fabregas was outperforming him statwise. This year, he is dominating everyone in Europe with his numbers.

He has never disappeared from games.

I look forward to every touch He makes on the ball. ….He just glides over the pitch, floating effortlessly and loosing his markers….. and his passes are simply phenomenal…… sometimes I try to guess where he’d thread those passes, most times I fail woefully,…. like he’s got owl eyes or something! He’s just a Joy to watch!
COYG tonight!

Not only is he the most intelligent player in Europe, he’s also a generous human being, lending his celebrity and donating his money to help those in need- and I think that’s what makes Mesut such an inspirational presence in world football today.

OT But I listened to Adrian Durham spouting shit tonight, I dislike him intensely! CUNT