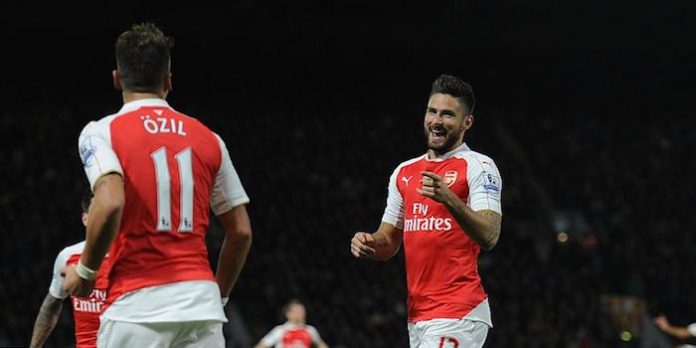 Kicker are reporting that Mesut Ozil won’t be called up for Germany’s upcoming international games as coach Joachim Low wants give him a rest because he doesn’t enjoy a winter break in England.

According to their article, “Löw plans after Kicker information, some permanent employees to take a break, have been particularly stressed in the recent past. These mainly include those Legionaries who have to live in their clubs without winter break – especially Mesut Özil (Arsenal) and Toni Kroos (Real Madrid).”

So, this either means he’s getting a break, or he’s just been diagnosed with Legionnaire’s disease. Knowing our luck it’s the latter, but hey.

There’s no such good news about Laurent Koscielny or Olivier Giroud, however. Both the Frenchman have been called up for their ‘friendly’ matches with an Ozil-free Germany and Gibbs-laded England.

It’s a worry because Koscielny is carrying a hip injury while Giroud is our only fit striker. The HFB is in fine form at the moment, but his goalscoring tends to tally with his tiredness levels.

When he’s a bit jaded he finds it tough going, so hopefully he won’t be too knackered after playing in these games which don’t matter one bit.

At last some good news on possible injury front.

Did your Google translate have a breakdown? ?

I’d argue the friendlies matter for France given they’ve not played competitive football since the World Cup and this is all they have ahead of hosting the Euros. If anything happens to Giroud, can we just blame Benzema?

Not sure they really matter seven months out from the tourney. What will Deschamps see from Giroud or Kos or any other French player in a meaningless friendly that he hasn’t already seen before? Any friendly match next week is borderline criminal — and considering the characters involved in international football you can drop the ‘borderline’. Hope more international managers learn from Löw’s example. Giving Özil a break is unquestionably the right thing to do.

Legionnaires gag had me laughing on the tube, Blogs.

Hopefully theo will be back after the lull too

For some reason, in German usage players who play outside their native country are often called “legionaries”. In case you’d like a native-speaker translation of that paragraph (article here http://www.kicker.de/news/fussball/nationalelf/638629/artikel_laedt-loew-trapp-weigl-und-stindl-erstmals-ein.html for anyone who wants to read German): “According to information available to “kicker”, Löw is planning to give time off to some core players who were particularly strained recently. This means especially those players playing abroad who have to live without a winter break in their clubs – before all others Mesut Özil (Arsenal) and Toni Kroos (Real Madrid), with both of whom this has already been discussed. Bastian Schweinsteiger… Read more »

Bellerin is the Flash

Norn Iron Gooner
Reply to  Bellerin is the Flash

That’s the PC one. Handsome Fucking Bastard is where it’s at….

What a top bloke Low is. Compare him to that monstrous cunt Coleman who was upset Arsene dared suggest that two players playing unnecessarily on a plastic pitch proven to cause injuries may have, in fact, caused their respective injuries. Cunt. Can’t forget the way he hung Ramsey out to dry over the whole Shawcross playing for Wales incident, either.

Coleman is a bad-mouthed, disrespectful shit.

I’m a great Wenger fan, but I kinda agree with Coleman here. We played Ramsey twice a week before and after the international break, and then when he got injured two games after the break we blame Wales. If it was so obvious he was going to be injured, why didn’t we give him a rest ourselves? Shouldn’t it be our responsibility to keep our players fit? Instead, we overpay them and then complain if their national team doesn’t give them the rest they need.

Relief! How about Alexis? Can Sampaoli be that reasonable also?
Difficult I know; I think South America is playing WC qualifiers.

Errrm…. The question should rather be, would Alexis be willing to take a break even if the coach offers him one?

The problem with Alexis is it you put him on the bench he just runs sprints up and down the touchline all game and ends up covering more ground, not less.

Yes, but it isn’t as long as the one in Germany, so the Germans still think it is tough to only get two weeks off.

World Champion winning team with a world champion coach. Sensible. Unfortunately the timing just wasn’t right to bring in Klopp. But after the Euros, if Jogi doesn’t want to defend the WC and Arsene’s ready to call it, possible next Arsenal Manager? I wouldn’t complain.

What’s this? An international manager acting with consideration and foresight? Unheard of.

Toast with Butter and Jam

He’ll still manage to get an assist

The only Giroud has to play for France is because of Benzema’s off-pitch shenanigans. Stupid interlull.

Also I hope Deschamps isn’t a prick and plays Koscielny. *Doesn’t play him when France needed some real defenders at the world cup, plays him when he is injured for some meaningless friendlies…*

Much rather he played Zouma and SomeOtherCunt, let them get injured.

We could hope Martial or Lacazette is picked ahead of Giroud, but I fear that the blow to Giroud’s morale for being overlooked in his current form would be worse than the blow to his fitness if he does play. Ideal case is probably that he starts the first game and sits out the second.