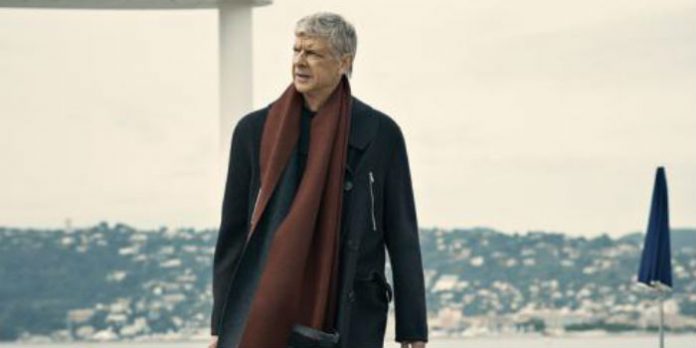 Usually when Arsene Wenger sits down with the media the focus is on squad fitness updates, transfer speculation, analysis of player performances and the other day-to-day stuff that involves running a football team.

Over the course of 19-years the boss has become a little suspicious of chaps on Fleet Street, rarely opening up on broader subjects in their presence. Quite often his most interesting chats tend to be with journalists on the other side of the Channel; the latest of which appears in L’Equipe’s Sport & Style magazine.

As well as being the subject of a very snazzy fashion shoot – the 66-year-old dazzles in some snappy menswear daaarling – he’s also honed his inner Proust, touching on how and why he approaches his work the way he does.

“The only time for happiness is the present. The past holds regrets. The future uncertainties.

“Man realised this quickly and created religion. It forgives him for what he has done wrong in the past and tells him not to worry about the future as he’ll go to Paradise. There’s great advantages to this. Man is very early on ‘self-pyschoanalysed’ through faith.”

On how he finds meaning in his work, he adds: “In the religious world, it is said that God created man. I am only a guide. I allow others to express what they have in them. I have not created anything. I am a facilitator of what is beautiful in man.

“I define myself as an optimist. My constant battle in this business is to draw out the beauty in man. At this level that can portray me as naive. At the same time, it allows me to believe it and it often gives me reason.”

If you’re a French speaker, you can read more about the boss’ uneasy relationship with ‘time’ here. Or you can muddle through with Google Translate like we did.

How can you hate this man?

How can you not love this man?

How could you love this man??? Well because he’s fucking great, and because he loves arsenal, and because if you weren’t reading, this man is a man trying to make art via wining football matches and having to deal with utter fucking brain dead cunts like you and all the hipercritical spineless twats like you! Deep down you probably want a manager like Jose Mourhino or some shit, just fuck off and die, you internet troll you hahahaha Did mention your a TWAT

I love the man.

I also love men. The the is not that important here.

Its a Ben Stiller line, but its not from Zoolander.. – ‘Now he’s a philosophiser’ its from Dodgeball. Stiller plays a character called White Goodman. He responsible for some absolute gems, such as:

‘Here at Globo Gym, we’re better than you, and we know it!’

‘Oh, that? – That’s me grabbing the Bull by the horns, its a metaphor; but that actually happened though’

You’re right, I am well and truly ashamed.

I got it mixed up with “A eugoogoliser, one who reads at funerals.” from Zoolander.

Thank you for showing me the error of my ways.

An easy mistake to make my brother.

As the kids would say, he’s ‘killing it’ in that shoot. Suave.

Today, Wenger is a roadman.

My sister called him swaggy.

I would agree, mucho swag Arsene.

Just skimmed through this, did he actually say it wot?

I’m sorry, but you just can’t imagine Mourinho getting all deep and philosophical like the man Wenger. Superb stuff.

That’s because Mourinho is a bellend

Mourinho is a vile little mosquito, our man Arsene is a colourful, vibrant butterfly.

Really can’t wait for him to release an autobiography

That would be one of the few that I’d actually be interested in reading.

If he does it wouldn’t be for money or vengeance (the usual reasons many other managers have).

@ raron aamsey. I have never been remotely interested in any one person enough to even consider reading their autobiography but like you I genuinely cannot wait for Arsene to release his! Although it’ll be tinged with sadness as that would mean this great man is no longer our manager…

I too can’t wait for Arsene to write a book, will definitely be a fascinating read.

Oh, on a side note Mourinho released an autobiography. It was a picture book. ?

I have a signed copy of Stillness and Speed, and I thought the book was brilliant – indeed almost as brilliant as the fact that Dennis actually signed it for me. If Arsene ever wrote an autobiography I’d be lining up at the bookstore the night before to buy it.

Literally, so this man is unbelievably intelligent.

Could you imagine Mourinho or, heaven forbid, Big Sam saying anything like this?!

Sam: I didn’t make them, but I can eat all the pies.

We don’t talk enough about the humility it takes for him to do what he does the way he does it.

I am just smiling looking …. what a man!

Any french speakers willing to provide a full translation of the article? If i manage to find someone willing outside of goonerdom,ill post a link or something here. Love hearing wenger speak,esp on things outside of football.

Not a French speaker, more of an understander! Bloggs has got the gist of it. Most of the rest of the article in the link is about Arsene spending the last Interlull in the south of France and stuff about the photo shoot.

Agreed on the Autobiography, there’s nothing to not love about Mr Wenger.

Haha! I thought this was a spoof article at first, an exaggeration of something deep and philosophical Arsene might have said in a press conference. I’m pretty sure that in another life Nelson Mandela and Arsene Wenger would have been best mates, with Arsene’s principles and beliefs taught at schools all over the world and successfully applied to resolve global conflicts. What a guy!

The only time for happiness is the present. The past holds regrets. The future uncertainties.

That’s the kind of man I want running our club!

Someone should translate this article to english and share this beauty of a mind to us. 🙂

I’m feeling mushy all of a sudden….

Wenger is like the Godfather. Come on boss let’s stuff the spuds on Sunday.

Your simile is understatement! He’s not a Godfather alone;he’s an INSTITUTION!!

In Essex it means asking for a kebab from the bloke called Raison at Walton Kebab House.

“Religiously, it is said that God created man. I am only a guide. I allow others to express what they have in them. I have not created anything. I am a facilitator of what is beautiful in man.”

“Someone needs to learn how to use quotes appropriately.”

I don’t look upon this like it’s the end, I look upon it like it’s moving on you know. It’s almost like my work here’s done. I can’t imagine Jesus going ‘Oh, I’ve told a few people in Bethlehem I’m the son of God, can I just stay here with Mum and Dad now?’ No. You gotta move on. You gotta spread the word. You gotta go to Nazareth, please. And that’s, very much like… me. My world does not end within these four walls, Slough’s a big place. And when I’ve finished with Slough, there’s Reading, Aldershot, Bracknell, you… Read more »

Love ‘The Office’. Brilliantly written, Gervais may not be everyone’s cup of tea but he wrote a genius piece of comedy for me there (with Merchant) of course.

French/English-living-in-France-and-speak-French Gunners: How is Arsene perceived by the media/public in France? Curious as to whether he’s mocked/scorned as he can be by the press in England. For some reason I wouldn’t think so, he strikes me as the sort of bloke the French would treasure..

I seem to remember a France game in Paris where the camera panned to him and he appeared on the big screen, the crowd cheered. I think they’d love him as France’s coach.

Arsene demonstrates yet again why world leaders, captains of industry, academics, & writers have all sought an audience with him at one time or another, over many many years.

It’s also why the media ask him many non-football related questions, regularly.

I’m so glad that he is our manager and the public face of the mighty Arsenal.

International break. A few days of escape for Arsene Wenger. Far from London Colney, the Arsenal training camp. Arsène free. Somewhere between Nice and Cannes. Quietude. Lunch with friends at the Petite Maison, his lair in Nice. A touch of football too. Armenia-France at Allianz Riviera. Arsene Wenger gives appointment at the Hotel Belles Rives, former Scott Fitzgerald’s Villa St. Louis. Writer and dandy. 10 am. Arsène is punctual. Photo session. Heaven is merciful. A bedroom, the 70, serves as a dressing room. Wenger likes to follow the advice of Cindy Sanchez, our stylist. Arsene Wenger plays dummy. Long gray… Read more »

How can u not love such a wise and knowledgeable guy. Now I understand why Mourinho hates him and the media thinks he’s boring

Can’t wait for his autobiography

This reminds me of Chance the Gardener from ‘Being There’. Some believe the film was about the second coming, in Arsene’s case it’s true: Herbert Chapman first then Arsene Wenger – long may he reign.

Reminiscent of Chance the Gardener in ‘Being There’ which is said to be about the second coming. In Arsene’s case it’s true.

Brilliant, brilliant stuff. We are so lucky to have Arsene Wenger.

This is why he is a role model for everyone, whether you are a football man or not. His style of management, his philosophy are ingrained in his personal life as well. That picture of him and Sagna, it featured in an arseblog article, perfectly encapsulates him.

Disappointed there was nothing about his relationship with zips and pockets

Will miss him when he’s gone

He really is!
Prob on my top ten of all time to have a night down the pub with.

Did anyone else think it was a shark in the background??