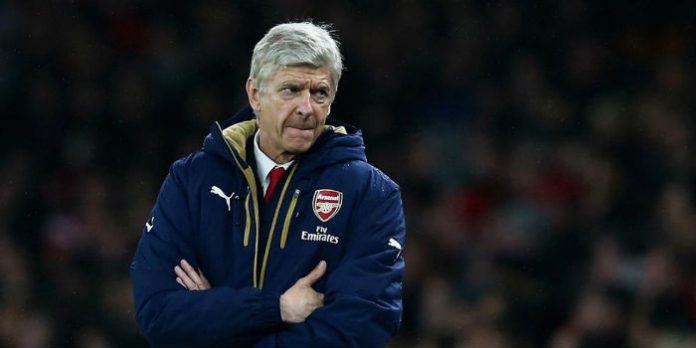 Arsene Wenger is urging his side to ensure they remain in the Champions League, but says that if results didn’t go their way, the club would take the Europa League seriously.

Obviously it’s viewed as the poor relation in terms of European competition, but winners in recent years have included Sevilla, Chelsea (who won it having failed to qualify from their Champions League group), and Atletico Madrid, and ultimately it’s trophy there to be won.

Asked how he would approach it if that’s where Arsenal ended up, Wenger said, “We would take the competition seriously – but we are not out yet.”

Pressed on whether or not the Thursday/Sunday schedule would be damaging, he continued, “I believe that this problem is exaggerated a little bit in England because we play Wednesday and Saturday, so it is the same as Thursday and Sunday. I can’t see the difference.

“There are plenty of examples in Portugal and Spain where teams have taken it seriously and won the championship. Benfica are the example, Sevilla have done well.”

The Arsenal manager also paid short shrift to suggestions that Bayern Munich might slacken off against Olympiacos in order to get rid of the Gunners.

“In front of their crowd they will want to win,” he said. “That will be really Machiavellian to think they will deliberately lose to get us out.”

Good article on this in the Guardian today. http://www.theguardian.com/football/blog/2015/nov/24/arsenal-europa-league-champion-league-fourth-place I guess it is a trophy.

I would still prefer us to be out of it given a choice (see Liverpool coming second in the PL due to having no European distractions, we can do better than them in a similar position) .

I’d like Alexis to be that fresh and energetic, and Ozil etc.

Or should I say the rest kept him hungry?

Perhaps if the bitey fellow hadn’t been so hungry, he wouldn’t have needed to bite anyone?

I really hope we are still realistically in the CL after tonight.

If not, considering we are down to bare bones in terms of available players, will be very happy to be out of Europe all together.

If we are really after a cup, I’m not sure if the Europa cup is worth the travel as compared to the FA Cup!

Very good point regarding the Thurs/Sun games. I never really thought about it that way. Wed then Sat is pretty much same as Thurs/Sun.

Traveling to Russia and back is the issue. Travel time between matchdays is what drains the players.
Personally, I enjoy the Europa League and find it much more exciting than the champions league especially when the spuds lose 🙂

Don’t they have home games?
Don’t they have teams from Spain,:Belgium and the like?
I think Arsene is right: lots of exaggeration by the English press and fans.

You play an extra round or two, and your chances of being sent out to some country you’ve never even heard of are much higher.

It isn’t the end of the world, especially to enter the competition from halfway through, but it’s hardly great.

I dont see why people are worried about Bayern not beating Olympiakos.
Bayern are still in a risky position, although that is finishing second instead of first which they should get. If Oympiakos were to take points from them then, they would be in a perilous position, so I see no need to worry about a Batern team not determined to win. We’ve unfortunately seen first hand what they can do when out do a job.
Come on Gunners, we’re still in with more than a serious shot of qualifying!

I quite like that. Win the Europa beats not winning the league in my opinion. Another monkey of our back kinda thing

I’m pretty sure Bayern are not concerned about us. Or anyone, apart from Barca

Neither should Bayern be…In fact, Arsenal should be first wary of Dynamo, and not the other game in the group

assistantref
Reply to  Easy as JVC

We could take it seriously and have a good chance of Wenger winning a European trophy or we could use it to give experience to younger players and match fitness to our fringe players. Either way it’s not a disaster to be in it but we haven’t fallen into it just yet

Plus if John’the cunt’Terry can lift it, then it should be a price of puss!

No Europa league please. It’s a long hardious competition and several trips behind the Balkans. It’s not worth risking the realistic prospects of winning premiership we got this year. We all remember what ferguson did when manure went to this competition during his last year’s of management. He filed b-teams got eliminated quickly and won the premiership. This competition is for the spuds and other mediocre teams

Or a piece of piss. Although cunt Terry is probably a good person to ask the price of puss!

rossi88
Reply to  Easy as JVC

Price…..pfff, dont worry bout that. His mum can get it for you for free ; )

Are there published biographies of Wenger? I need to buy myself one for my Christmas gift. Or a book of his most famous quotations. Someone recommend the best for me. And to answer before you ask, I’m not a Wenger worshiper, but I darn think he’s one of the most intelligent people ever in football.

I’ve come to the conclusion that Gabriel could be the perfect replacement for Coquelin. He’s got many of the same attributes- aggression, tackles, reading play and decent passing.. He may be lacking in the dribbling area but compare him to Chambers or Flamini and I think he’s the best option..

Wenger has a large Coq
Reply to  AngelGooner

Please not the whole “Vermaelen at DM” thing again

Imagine if it was revealed that Buyern and Barca have been actively doping their players….

Well, Messi was using human growth hormones as a kid…

Not entirely sure that’s a good example given he’s little taller than MiniMe.

It has always been fascinating to me to speculate about whether Messi would have been the world’s best without his hormone deficiency and later supplementation. I think it is very unlikely.

What are you saying? That if Messi hadn’t taken HGH he’d be a circus midget? If Messi has been taking HGH, then I think that’s pretty much your pictorial proof that the stuff doesn’t work.

Wenger’s inability to strengthen the squad makes me doubt he takes any competition seriously. *sigh*

I mean, we all would have liked more, but the idea that he’s done nothing and that being presented as an absolute is really tedious.

Not only first team Players.

Pound for Pound we have a squad that can challenge for the CL but we don’t have the individuals consistently available to us. That is not wengers fault. Even if it is something in the training pitch or the techniques you can be sure he is getting the best help in finding the cause of our injuries.

it’s that he doesn’t do enough despite having all the means to do so. if he really wanted to win he’d do everything in his power to set the team up for success. he just doesn’t and that’s what’s frustrating. you can say that it’s admirable what he’s doing with the team, his loyalty to players that have past it and/or spend most of the time injured, his development of youth, and and good on him. but he’s not ruthless and sometimes you have to be to win championships.

“tedious” is code for something else right? 😉

My reaction to the possibility of “qualifying” for Europa League: Nope.

I’m happy to play in the Europa rather than the Champions League, as long as they adjust my season ticket price downwards. I can understand paying a fortune to watch Bayern Munich. But I’m buggered if I’m paying £40 or more to watch FC Carrier Bag or Dynamo Shopping Trolley.
I mean bloody hell, we’re not Tottenham.

So if Sp*rs finish fourth, and we win the Europa league, does that mean we’ll qualify for next years Champions league but they would miss out?? Every cloud and all that..

Me So Hornsey
Reply to  Dial square

No. Because if spurs finish 4th, that means we finish 1st, 2nd or 3rd (at least going by every single season since my 19 year old daughters been alive) so we won’t need to qualify via this route.

Wenger has a large Coq
Reply to  Dial square

No it wouldn’t, the same thing happened in Spain last year; Sevilla won the europa league but finished below 4th. Instead of taking the place of 4th placed Valencia, Spain are now the 1st country to ever have 5 teams in the champions league.

Big possibility but we cross the bridge when we get there. Should never be our main aspiration. CL even if it means knocked out in later rounds must always be priority not the lesser cup. Setting sights so low (However seemingly ‘realistic’) is the cut of the defeatist. Would have meant we should have set sights say on league cup instead of FA cup which we won and managed to retain. We are still a bridge too far with CL and in all likelihood its very much stacked against us (and our own doing) I can somewhat see the argument… Read more »

Let’s just say wenger said all that just to be polite to the press.nobody at Arsenal wants Europa league.End of…

Our mouthy Maureen has started shooting off again. Hasn’t yet qualified for the group stage himself. A month ago he was like ‘no comments’. Despicable fellow…