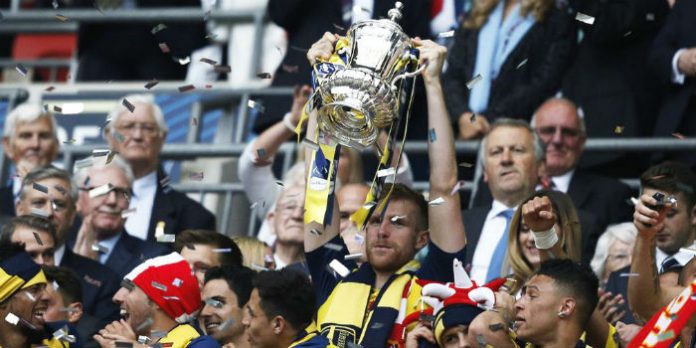 Arsenal will kick off the defence of their FA Cup title with a third round home tie against Sunderland.

The Gunners enter this year’s FA Cup as the most successful club in the competition’s 135-year history with Wembley triumphs in the last two seasons against Hull City and Aston Villa taking their tally of victories to 12. Six of those titles have been achieved during Arsene Wenger’s tenure.

The third round matches will be played between 8 and 11 January 2016.

Could be worse..
Should have something resembling a full squad by the time this game comes around. COYG!

Pls stop jinxing. It such kind of statements that make us overconfident and lead to losing easy matches.

I highly doubt our confidence as fans translates to poor performances from the team we (are supposed to) support. I can say this with authority as an expert in motivation techniques.

I don’t think any comments made by any person on this Web site have ever led to the team winning or losing anything.

Amazing just how many people believe in this jinking lark.

I think someone’s jinked your spellcheck.

I think fat Gooner really lights a fire under the team…

Allardici has never fancied the FA Cup……..too busy concentrating on relegation issues.Good draw for us.

Please don’t let us get too overconfident. Expecially with Sunderland’s recent improving performances (surely getting better).

The Walrus will definitely not be happy.

Three FA cups in a row. I fancy that. Lets go for it.

we should have a much more fit squad by then, too. up the arse!

I think this is the time we need Welbeck back into the squad. I fancy his work rate, expecially that the tackling master (Sanchez) will be missing for about 4 weeks.
A chance of an early return for both Wilshere and Rosicky will surely be added bonus.

If we can beat Sunderland 3-1 with half our starting XI missing, we should be able to thump them pretty good in January when we have most of the team back.

Chelshit must be quaking in their boots, they’ve got either Leyton Orient or Scunthorpe at home. Don’t much fancy their chances there. Tottenham vs. Leicester looks a good match, be nice to see the Scum going out at the first hurdle once again.

that is a big if, fingers crossed we have wilshere and rosicky by then 100% fit we need them.

kind of crazy how many premier league teams drawn against each other considering how many teams are left.

We are home for our match; no excuses even if we rotate a bit.

Sunderland is my dad’s team so it’s always fun to play them an extra time. Apparently, they were a good team at some point in history 🙂

All set for the double!
Let’s just buy a couple or at least 1 player in January. And I’m being realistic!
Do it Arsene.

That’s if quality players are available at that time of the season; not just any mediocre footballer that will be of no visible benefit in improving the overall team performance.

I’m betting on an all London final Arsenal vs Orient

We beat Orient in the semi back in the day, I was there and saw Supermac’s deflected goal whizz past their keeper at Stamford bridge.
Chelski weren’t so cuntish then by the way…

the only sam is nelson
Reply to  Paul

back when they used to have those robin reliants parked in front of the shed end on the track around the pitch, and the big stand loomed over the whole place like a weird space ship? those were the days. now it looks like a B&Q branch full of window-lickers.

As opposed to now @paul

Has anybody ever won 3 in a row?

Nobody, we can make history, again!

the only sam is nelson
Reply to  assistantref

Wanderers and Blackburn Rovers both won three on the turn, but that was back when the Arsenal gent was in shorts…

so, obviously, it’s our turn

Home draw and defending champions. We have a great chance.

First team out of the glass bowl plays at home. In the ‘Old Days’ legend has it that Celtic v Rangers were kept apart in the Scottish Cup by warming the miniature balls with the numbers on so that the guys drawing them could identify them so they could be kept apart until the final….
It never happened in England though…

Your ‘wee’ hours of the morning provoked that thought in me !!..

The double you say…. the double we’ll do this season. And FA cup treble. C O Y G!

Forgive my ignorance but does Arsenal get to keep the cup for good if we win it this time?

3-1 win tomorrow and the treble is on!! Im thinking a flamini hat trick. He saves the world, he can save us.

Thanks for the tip, mate. I just put down a tenner on flamini to score a hat-trick. Got 449/1 on it.

Has anybody ever won three successive FA cups? I can’t be arsed to Google this.

I also couldn’t be arsed to have read the previous comments answering my question. Oh well, back to my telescope as I look through a lense upon distant constellations. The stars are almost random. But beautiful, like diamonds stuck in the walls of a coal mine. Around those stars whirl planets, not unlike Earth. Like a giant petri dish, civilisations greater and more advanced than ours fester with life, and look upon our players with envious eyes. They are the Injury Gods and they have taken Cazorla’s ligaments and our broken Coq.

Here we go with Big Sam once again. Guys please don’t give the Walrus any joy….