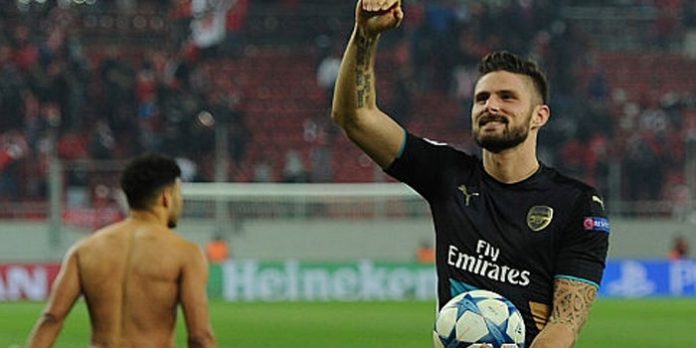 Olivier Giroud says he’s delighted to have scored his first Arsenal hat-trick, but says that the fact the team qualified for the knock-out stages of the Champions League is the most important thing.

The French striker opened the scoring in the first period, before two second half strikes ensured the Gunners passage to the round of 16.

Speaking after the game, he said, “It is fantastic for me. We are happy with this result tonight. We missed the chance two or three years ago and also this year in Monaco so it is nice to go thorough the group stage as we were not in a good position.

“Finally we have done it for the fans and I feel very nice.”

Giroud acknowledged the fact that he went home with the match-ball, but was keen to stress that it was a team effort.

“It is quite an important one [hat-trick],” he said. “It is my first one and I was waiting for that for a long time. I felt the team worked very well as a unit, so we are really pleased with each other.

“The first goal was a good ball from Aaron. Sometimes I like to step back from the box. The second one was a good assist from Joel and he did really well.
“We feel really pleased tonight, we had a celebration all together after the game. It has been a few years and we miss it. We really wanted to focus on the group stages so we bounced back and we have great team spirit and confidence.”

Just don’t know how people can knock this man. His enthusiasm and love for the club cannot be questioned. He’s very into team effort, that much is clear. Couldn’t be happier for the way his night, and the team’s, went last night!

I rate the guy, but I admit I get infuriated when he gets bullied by defenders and gives them the satisfaction of seeing him hurt. He either needs to draw fouls properly or go all in, and give as good as he gets.

Where as I rate his overall contribution, I can see some other fans not being so understanding.

I am happy to admit that I am one of the many fans that are not too convinced by him up front. However, I am so happy that he stood up for the Arsenal last night, and that he took the game by the scruff of the neck and got us the win. Those sorts of matches are the defining difference between average strikers and top strikers in modern football. He had 4 efforts on goal, and scored 3, that his basically as clinical as you can get. I can’t knock his performance, he was superb, I feel that now… Read more »

A Kick in the Debuchy
Reply to  IamaGoober

Football has no place for your reasonable opinions and the respectable nature in which you’ve presented them!

IamaGoober
Reply to  A Kick in the Debuchy

No need to reply with stats backing how good he is. I already know this, my point was, a change in his attitude could result in more goals and therefore more wins for Arsenal. That said I really like the guy and love having him at the arsenal

Funny how you bring up minutes per goal. Podolski always had one of the best minutes per goal ratio when he was with us, but people said he was shit.
Giroud is a good striker, not world class.

I would like propose we ban the phrase “world class.” It is utterly useless and non-definable. People either use it as stick to beat a player with or to defend ruthlessly someone they deem “world class.” Can we all please just stop using it?

Did you feel the same way when we had Henry and to a certain extent Van cunt scoring 30 goals a season with us and was tagged that??
Is Ozil not world class?
What about Cech? or Kos

Nice try. Can you name any of giroud’s previous seasons where he had 105mins per goal??
Why didn’t you make a comparison of both when poldi was around? Why use only this season?
All you should was poldi’s stats…bring up Giroud’s lets see.

I’m more worried about the next couple of matches he’s going to be playing in..
A section of our fans would still pick on him if he failed to score forgetting the fact that he is a human who is trying to do his best for the team and not a machine.

Hoping this could really kick start his season. He’s been good thus far, but I think he’s definitely got more in him. I think we’re all aware he’s not a Suarez or Aguero, but that doesn’t mean he’s not a fantastic player and just as important to us as they are to their respective teams. If we get him into some really top form like we’ve seen in the past, along with Ramsey, I think the league’s ours. Long as we’re within 5-7 points of the top by Jan when (touch wood) we have players coming back, I think we’ve… Read more »

Exactly! I mean if the mouthbreather from Sp*rs scored 30 goals on his debut season in the prem, Giroud could get at least as much, if not half a dozen more(based on quality).

Agreed. He doesn’t need to be a Suarez or Aguero – we have Alexis for that! Giroud is a completely different player and is so much more important than people give him credit for. Ok, so he doesn’t have “flair” that most people associate with a world class striker, but his goals to minute ratio is spectacular, so I’m happy!

As the HFB helped put us into the merde by getting sent off against D Zagreb it’s both fitting and redemptive that he contributed majorly to getting us back out again.

I think it’s time to put that (the DZ game) behind us now, and move on, looking upwards and onwards.

People are way too quick to give Giroud stick. Never lacks passion and I know he can be a bit over the top with his reactions sometimes but I’d way prefer to see too much passion than not enough. Love the man. Keep on scoring!

Walcott is back
In form giroud is also back

To be fair 10 goals in his last 12 games implies he’s been in fairly decent form for a while.

And he’s not even world class. Costa is. I saw Roy Keane yesterday on itv highlight. Lee Dixon left in the corner and the moron still stands by his moronic observations. Few weeks again he was vomiting on national TV that arsenal will never make it into last 16. I want to bend him with pineapple in my hand so bad

Couldn’t watch the match as I was being tossed like a salad, on a ferry over the Irish Sea, but my wife was texting me the key moments. I’ve just seen some highlights and witnessed Joel morph into Mesut.
What a play from him. And a carbon copy of the Rambo cross/Giroud header from the last game.
All without Alexis, Santi & Coq. Can’t wait for the whole match on Arsenal player.
Finally, Giroud has to be up for an ‘Olivier’ award for the best stage performance of the year!

I thought Campbell was the new Rosicky – may not be the talisman but significant contribution to the overall game.

What a great night! Giroud being subbed off filmed with my mobile.
https://www.youtube.com/watch?v=jvEhBE2DY_E

Anyone remember August when everyone on here was still hoping to get Benzema the world class striker in? What a fucking nightmare that would have proved to be! On best of days he’s no better than HFB, but all this shit about blackmailing his teammates would be a total distraction. We don’t need scum like that at Arsenal. We now have France’s #1 center forward. And he may have the occasional misstep with a a little paid-for hows-your-father, but who wouldn’t with his looks! We love you OG!!

The fucker Benzema also only escaped conviction for having sex with an underage prostitute by proving the prostitute lied to him about her age.

On the pitch, Benzema is a better striker than giroud. 12 in 13 games.
On his BEST DAYS, giroud does not begin to come close. FACT.
Now obviously it’s good we didn’t sign him due to the bullshit he got into, but Benzema the player>Giroud anyday of the week. HFB or not.