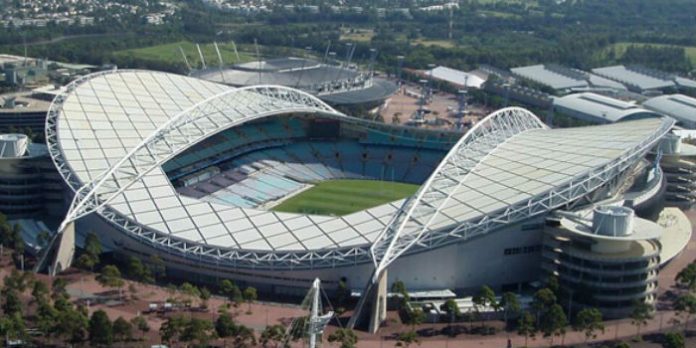 Australian newspaper The Daily Telegraph claims that Arsenal will play two friendlies in Sydney as part of their pre-season preparations for the 2017/18 season.

The matches are set to be hosted by the 83,000 capacity ANZ Stadium – the focal point of the 2000 Olympics and England’s Rugby World Cup triumph in 2003 – with Sydney FC and Western Sydney Wanderers the two opponents.

Arsenal haven’t played Down Under since losing 3-1 to the Australia national team on 20 August 1977 – Geordie Armstrong getting a consolation goal for a Gunners team that featured the likes of Pat Rice, Liam Brady, Graham Rix, Malcolm Macdonald and Frank Stapleton amongst others.

It’s about 600 days until the alleged fixtures will take place so this would represent some serious forward planning on the part of all involved. That being said, with a tour at the end of the current season looking unlikely due to the 2016 European Championships in France it’s not unfeasible we’re looking to the long-term future already. Who knows, by that point we may even have a new manager.

Last summer the good people of Sydney were unfairly ‘treated’ to a visit by Chelsea and Sp*rs. They deserve better.

Might be able to see my first live match.

And with the added bonus of it not being at 2am!

As a Sydney resident who had to bear the thought of being within a 20km radius of Chelsea and Spurs earlier in the year i just have to say this.

Don’t forget we had bloody Liverpool here too.

I’ll go to the WSW v Arsenal game and thoroughly enjoy it.

Great for the Aussies (I have relatives there so happy for them), though I still prefer the Austria camps that we used to do when we were winning the League regularly.

Austria not Australia for me.

Good point, probably helped keep us in the top 4 with Denilson, Eboue, Gervinho, Almunia and others.

This makes me happy. When are the tickets on sale? I’m willing to kop a $8000 fine for running on a pitch and yelling out loud,”what do we think of tottenham “????

What do we think of shit?

So much yes. There had been rumours they might come for a few of years now, but nothing eventuated. This came out of nowhere but so glad it is finally happening!
Football needed some good news here after all the bad publicity lately.
Also glad Arsenal are playing the Sydney clubs rather than some A-League All Stars BS like United did a few years back. Every time a good team visits it always sells out fast, ANZ will be packed to rafters for both games!

OMG. My pants are sticky.

Elated for the Australian gooners. Still waiting for Arsenal to come to India, there were rumours that they might drop in around 2017. But, that seems unlikely now. Well, hoping it would happen in 2018.

So. Much. Yes!
I reluctantly watched Man U with the father in law, avoided Sydney with Chelsea and Liverpool, and now i can (hopefully….) go nuts when the Gunners come to town!

I knew this was only a matter of time.

Would be nice if they went to some other cities too Melbourne, Brisbane or Adelaide.

Just Sydney, it’s all decided already. It’s a deal with the NSW Government.

Well, in two years, but it's good enough 😉

My wrist is cramped and I’m dehydrated from loss of fluids since I read this news!
Only game I’ve ever been able to go to was Emirates cup when we won 2-1 against Atletico Madrid in 2009.
Buzzing!

I heard this rumour it from a guy on FB who heard it from a friend at a grog company yesterday.

I’m in Perth, I don’t care it’s the other side of Australia. I’m saving from NOW!

Fellow Aussie Gooners – staying up for the 2am kick offs and the 4.30am kick offs has all been worth it. Now I can stop washing myself after the other London visitors this year. Seriously, how did John Terry get a visa?

And the 6:45 am champions league nights which result in no sleep all night.

As a gooner from Sydney, you have no idea how excited i am!

It also annoys me a little that the Emirates becomes empty even though we are winning 3-0 or so haha.

If you’re in Sydney you know what public transport is like here. It’s bloody worse in North London. Sometimes people have no choice but to leave early.

Lucky bastards down under. Still waiting for them to come to the Pacific Northwest of the US. Would prefer the west coast of Canada, but can’t realistically see that happening in the foreseeable future. If teams like Manure can come to Seattle, why can’t the Gunners?

^^^ This. Actually, ANYWHERE on the West Coast would do. The Rose Bowl in July? It’d be a sellout, over 100,000 Gooners would be there. Smeg knows I would!

Hmm, my home kit against Sydney FC and my away kit against Wanderers… so much planning to do and only 600 days to do it in! 🙂

I’m an ANZ stadium member and just received the official member memo about it. It’s definitely happening and part of a new strategic partnership with the NSW Government

“Arsenal Football Club and the NSW Government have announced a multi-year Tourism Partnership, which will culminate in Arsenal playing the two matches at ANZ Stadium in July 2017.”

and as others have stated, there was something truly horrible about walking around Sydney when 80K spurs C*#%*s were in town.

But fair’s fair, you couldn’t tell they were Sp*rs fans from their clothes. You had to get up close and see that empty 1000 yard stare in their eyes to realise what they were.

OMG HAPPIEST DAY OF MY LIFE. I’m not even exaggerating.

Oh yes! So excited about this. It’s definitely happening – http://www.anzstadium.com.au/