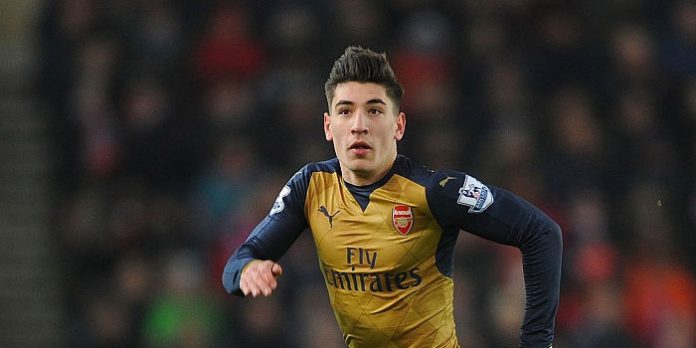 Hector Bellerin arrived from Barcelona to London at 16 years of age, and is now the club’s first choice right back.

The young Spaniard has impressed with his lightning feet, his defensive nous, his attacking verve, and his marvellous ‘Spockney’ accent. He’s come a long way very quickly, and next month will face his old club in the Champions League.

In a lengthy interview with Amuse, he spoke about how much he was looking forward to the game, playing the best team in Europe.

“I’m excited,” he said. “My family as well! I played for Barcelona for eight years, so it’s a massive thing for me and my family, who have been watching me since I was young.

“The day the draw was announced I started getting texts and calls from everyone. It’s crazy how a game moves so many people. We’re very excited – it’s going to be a hard game, but if we did it against Bayern, then we can do it against Barcelona.

“We have a great team mentality and our confidence is very high, so we fancy anyone at the moment.”

The 20 year old has shown maturity beyond his years on the pitch, and that seems to be present off it too. On the best piece of advice he was given about his new-found fame, he said, “Well, once I was told—in Spanish, so I’m not sure how it’ll translate—that when it comes to critics and fame: chew it, but don’t swallow it. Even if it’s nice to have people telling you all this stuff, don’t believe it.

“You should always keep yourself grounded, to know where you came from, how you were when you were young and how your family lived before you. I think that was great advice.”

Top man. There’s lots more to read in the interview about his life, fashion, and more.

This is where it starts, all their staff and players will start talking about the infamous ‘Barcelona DNA’ .. which should be renamed ‘career ending serum’ since every player that’s ever jogged us on to join them has gone on to have a shocker of a career. Just hope that Bellerin has the sensibility to listen to Arsene Wenger, and Arsenal, and look at all of these other lads that have left us to join them, and how their careers nose dived their into the ground Look at old Cescy the snake .. sniffing round the relegation places, and out… Read more »

Except for Cesc… I would barely call having the highest count of assists and a Premier League medal in his first season a ”shocker of a career”….

Hector “The Flash” Bellerin. I still play the clip of his interception against Bayern. 90+ minutes and still has the energy to zip across half the pitch. Amazing stuff

He did that again…probably against Liverpool.

Yes, will be fun to watch him have a great performance against Barca, leading to them very actively pursuing him in the summer through the Catalan media. That’s always a good time.

Hope he doesn’t end up with the devils in blue shirts like a certain midfielder.

in the event that we do beat them i don’t see why he would want to make that move.

If this article doesn’t inspire a Cockney fan dub of all of Spock’s lines then nothing will.

Brilliant player. We need to play all our quicks against Barca. Sit back and wait for the opportunity and counter attack. Hopefully Welbeck will be back and although Giroud has done brilliantly, Walcott should be played in his preferred no. 9 role. Welbeck and Sanchez on the wings and Özil in no. 10. Bellerin of course and NOT Mertesacker.

Really I’m not very worried about either, to be fair, but his pace is so irregularly exploited in contrast that this whole proposal sometimes feels counterintuitive. Why sacrifice defensive continuity for a bit of speed defensively?

Because firstly, the fact that Mertesacker is slow means koscielny has more things to worry about than just marking the forward/midfielder closest to him. Secondly, there are many teams that take advantage of Mertesacker’s lack of pace, provided they have pace themselves. Suarez did it, so did Costa, Aguero(when fit) and bayern did it with Douglas Costa running past bellerin(or tried to). The other not so obvious thing people do is try to get koscielny higher up by playing the centre forward deep and then having a winger run past him in the vacant space when our full-backs are higher… Read more »

It’s not just lack of pace but he also seems to lose focus on important occasions, and sometimes makes some silly decisions, e.g. looking at the linesman just before he goes for the suicidal tackle on costa, or turning his back on shots, or just the fact that as captain he is not very vocal on the pitch especially when we need the likes of Ramsey and Flamini to be in position to keep things tight. Add that to his meekness at vital moments – the time he turned his back on Martin Skrtel is etched in memory, his inability… Read more »

The other point to note is, picking up a little on locksley444’s comment about tactically using his lack of pace against him, his lack of pace means we cannot push higher up the pitch for obvious counter attack vulnerabilities, nor does it allow us to recover in case things go wrong – Costa again being a case in point. If we were to play two quicker defenders who are better in the air and more aggressive, it certainly stops opposition from trying to intimidate us.

I agree except one: Walcot should be on the bench or even at home.

Many years ago I remember a very young ,dashing left back coming into the Crystal Palace team and thinking to my myself ,wow, what a prospect. His name was and is Kenny Sansom and he went on to become an Arsenal captain and England regular with 67 caps I believe.
Good as he was at a young age he was nowhere near as good as Bellerin…!!!

His accent is almost as confusing as Hector’s!

His accent is almost as confusing as Hector’s!

What does an all-out pace attack Arsenal look like?
That’d be a strange thing for a change, just for the surprise of it.

I understand what you’re trying to do, but realistically Coquelin and Monreal have to start. I would also play Mertesacker instead of Gabriel as we probably will be sitting back most of the game so his lack of pace won’t be exposed.

I actually wouldn’t mind that front 4 though. On the break we’ll be lethal with the pace of Walcott, Alexis and Welbeck.

I would be incredibly worried about the massive hole that would be left behind Ramsey and the Ox.

Not that I dislike either player, but there is absolutely no one there to shield the back 4.

Silent Stan Silent Stan’s Moustache – Ears – Mouth Silent Stan’s Gaze – Fists Silence – Silence – Silence – Silence Silent Stan’s Impenetrable Shares. Bench: The fat guy who keeps bitching about how much he loves Wenger and sounds like the sci-fi writer. The ultimate Arsenal formation. Is he there? Is he just being silent? Or is he preparing an assassin-like verve to uproot the Emirates to a gentrifiable but not yet gentrified neighborhood in the Catholic belt of the Southern U.S.? Who knows, who could guard against such tactics and formations? The economic nous is unstoppable. So who… Read more »

Just found out today Silent Stan’s wife is daughter to Sam Walton, founder of Walmart, aka Asda in the UK. Kroneke funded the new NFL stadium in Los Angeles with his own private money.

I see now where those 6 million were spent. How about he spends some of that Walmart money in buying a world class striker and defensive midfielder?

Yeah, I’m bored at work too.

Bring back my coq :(

No Walcott for me. Barça’s defenders are faster than they are strong. With Campbell and Alexis, Giroud could do well in that game.

It’s hard to explain how much I love this man. Ever since watching him against Benfica in the Emirates Cup 2 years ago I have believed in him. Make us proud, Hector, and stay at this club until you retire.

Please, we need to assign him some bodyguards. We don’t want anyone throwing a barca jersey on him :S

How and where to submit applications to establish the ‘Gooner Squad’? Volunteer bodyguards for people more fit than we are – how could it fail?

Just checked the song of the day for the day I was born. “Another Day in Paradise” by some random bloke named Philly something. Not gonna lie, I have always loved this song.
Bring on the Hate, Bring it I say!!!

Wonder if hector passed that advice on to coq!! Chew don’t swallow

Just read the whole interview and I’ve gotta admit that this kid has really kept his feet grounded. Very humble and if he continues with his principles he’ll definitely turn out to be one of the best full-backs to grace the game.
My favourite part –
Interviewer: What’s been your most extravagance purchase?
Hector: It definitely has to be the Apple Watch. It’s probably the only thing I’ve bought and said after, “why did I buy this? I don’t really need this.”

Should be a great matchup for him going against Neymar much of the time.

Off-topic
It just dawned on me that the lose last weekend was Flamini’s first lose at the Emirates. :O

Let’s hope that he performed well against Barca and not trying to do Cescque no look back heel on his own half.

We’d best show up for the first leg or we’ll be in a right pickle.

Have we sold anyone to Barca where that player has flourished and their career has gone onto better times than when they were with the Arsenal?