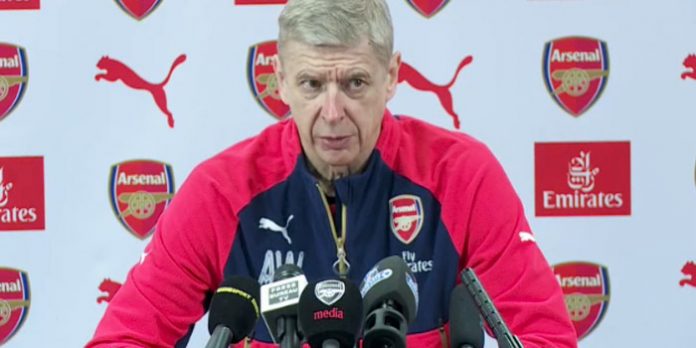 Arsene Wenger has confirmed that Alexis Sanchez will miss both Saturday’s FA Cup 3rd round match with Sunderland and the trip to Anfield on Wednesday.

The Chilean international, who is nursing a hamstring injury picked up against Norwich in November, should be fit to return against Stoke City in eight days time.

“Sanchez is a bit short to be involved in the squad, but he’s not far,” Wenger told his Friday press conference.

Mikel Arteta, who played 45 minutes for the under-21s earlier in the week, will return to the first team action with the boss hoping the Spaniard will be a ‘consistent presence’ in his squad for the rest of the season.

Yesterday, Wenger stressed that his squad would be largely the same as that which overcame Newcastle last weekend.

“Ozil, I don’t know [if he’ll be involved]. Walcott is not overloaded with games.”

There was also another update on the long-term absentees, with Danny Welbeck set to be back in three weeks and Tomas Rosicky ‘doing well.’

I wonder if alexis has had a setback, we need him back soon. The game against Liverpool is fine but the run of fixtures is a difficult one and to have a goalscorer like Sanchez gives the team belief.

I think it’s great. No rushing back players when we are playing teams with much bigger crises than ours. Sunderland can be tough but a Liverpool with no defence?
I’d say “Asene, keep your Duracell charging for another 8 days, after then it can be unleashed against the Roman relegation boring strugglers with no looking back.
No cause for alarm.

Although am beginning to have some withdrawal symptoms caused by not watching our Duracell bunny terrorizing defenses!
Happy to hear about Welbeck as well. These two will be crucial for the remainder of the season if fit (really praying they stay fit).
Predicting Rosicky to score a screamer, and the only goal, against Sp*rs if fit also! COYG!!

Take your sweet sweet time Sanchez, we happen to be at the top.come back with a bang.

Back in training in 3 weeks time is Feb, and after not playing for a year I don’t seen him back playing before March, that is the reality.

Man City brought Aguero back for us and he was rusty as hell. I think it is better that we use players that are match sharp for games like the Liverpool match. AS will be back terrorising defences soon enough.

It’s either the very best of news, or the worst – Guy de Lusignan

All that concerns me is transfer news about Elneny and one or two more signings,the League is ours if Wenger reinforce the squad.

Please involve the Jeff! I beg you Wenger!

The Anthony Stokes we were told about

Can somebody tell Rosicky its January? Its ‘rosicky-time’ and he is almost running late! My second half of the season wonder!

It is a worry with Sanchez having a delayed recovery and likely he will be at risk of tweaking his hamstring whenever he does return the way he plays full out all the time (esp in the cold, damp weather this time of year). Real shame he won’t be back for Liverpool as that is a key game for us and we have been struggling lately to generate much beyond Ozil’s brilliance.

Yes, we all want Alexis back ASAP. He’ll make a huge difference, but more than that, we just want to see him light up the team again. What’s far more important than getting him back ASAP is getting him back for the remaining part of the season. And if that means waiting for him to be FULLY match fit then I have absolutely zero problem with that. Remember, our last six Premier League matches have given us fifteen points out of eighteen. And we’ve been without Alexis, Santi, and Coquelin for all of them. This transitional period is one we… Read more »

Alexis’ fitness is crucial for d title run-in.His buzzing style is just the energy the team needs to move clear of the title rivals. Also Welbeck’s return can only improve the attacking options.