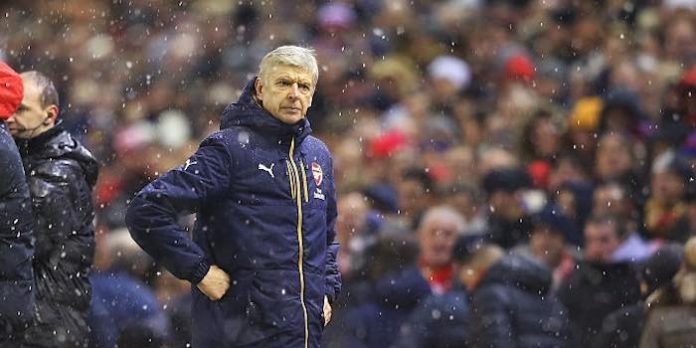 Arsene Wenger has admitted his frustration at conceding a late equaliser to Liverpool, but sought to look at the more positive aspects of last night’s game in the immediate aftermath.

Twice Arsenal came from behind to equalise, and went ahead with a fantastic Olivier Giroud goal before Joe Allen’s injury time strike saw two points dropped.

The result means Arsenal stay top of the table, just not as top as we would like, and after the game the manager chose to highlight the more positive aspects of the performance, but did express his unhappiness – not simply with the concession of the late goal.

“I’m frustrated by the result,” he said, “I feel in the first 20 minutes we were a bit on the back foot and we came back in a convincing way. 2-1 down we have shown character and scored after 2-2 and 3-2.

“Frustration comes from the fact that I think at 3-2, we had three situations where we should have made it 3-2 and we made a bad decision.

“We have shown again great character tonight and come away with a point and if you look at the recent results it shows you that everywhere it is very even and very difficult for everybody.”

As you might expect, he’s trying to keep spirits up in the dressing room – which would be pretty low after letting one in so late – ahead of another tricky away day at Stoke on Sunday.

And Wenger backed his players to use the disappointment felt against Liverpool when they face Mark Hughes’ side.

“They need to transform the frustration they have in the dressing room at the moment to even more motivation for the next game,” he said.

am i the only one who thought that flamini was hiding from recieving passes?
like everytime he had a chance to open up for a pass he just drifted behind a liverpool player…
our midfield just doesnt look the same without our Coq…
hope elneny can bring something solid (no pun intended) to our midfield.

Can’t help but wonder how we managed to concede 3 goals to that Liverpool side last night, for me, they’re one of the worst Liverpool sides for a decade. That Firminio hadn’t had a sniff of a Premier League goal for like 3 months and you’ve got the cunt rasping shots in the top bin from 20 yrds out. Not to mention Walcott handing the guy his first goal on a plate, goofing around with the fucking ball in the area as he was playing FIFA 98. I also think it’s no coincidence that we’re conceding too many goals at… Read more »

Taken alone, this result is acceptable but when you have a look at our calendar and City’s, this is a bad result. Until Cazorla and Coquelin get back, we have to hold on and pray for City to not find their form. Who knows, maybe this El Nenu dude will produce a miracle. By the way, no more talk about that second signing?

City have Palace, home, West Ham away, Everton in the Mickey Mouse cup 2nd leg semi, Sunderland away Leicester and Totts home and Newcastle away. Many of these are not walkovers and frankly their run is no different to ours. I suggest we all just calm down a bit.

Keep Calm and Arse On!

Not to mention the fact its the Premier League where it doesn’t matter who you’re playing these days as every game is difficult and with some of the results we’ve seen this season already anything can happen!

It must also be mentioned that Kompany reportedly is out for a long time.

Our schedule isn’t that much tougher than City’s, especially after we got the same number of points as they did yesterday. We have to play United and Sp*rs away, they have to play Chelsea and Liverpool away. Sure, the former two may be higher in the table, but on the day I don’t think one set of opponents is much tougher than the other. Also, City continually show that every away game is hard for them, even Aston Villa away. Finally, this isn’t the City from three years ago who demolished any team put before them at home, as they… Read more »

I think also, maybe before the game some of us could smell blood. All the talk of injuries etc. I think Liverpool on the night, were much stronger than we were anticipating.

In reality, a point at Anfield isnt half bad. We can also considder that we had to come back from behind twice, thats impressive!

Haven’t won at Stoke since Ramsey broke his leg, no?

This game makes me nervous out of the lot, this month.

I think we did 13-14, but I might be completely wrong. I remember Ramsey scoring maybe?

Yeah, I’m wrong. Not looking forward to the weekend as much now… haha

no we lost 1 ni. won the home leg though, ramsey scored and ‘shushed’ the stoke fans.

Don’t worry about Stoke mate. That tosser is now at West Brom. This Stoke is different. They actually play football instead of kicking people around. West Brom are the new orcs.

Someone clearly has forgotten about last season’s game.

So, you are saying orc-ism is contagious ?!

theos half arsed high elbow jogging really annoys me, a token effort to look like he is defending. the ox is having theos old problem of running into tackles and both of them give the ball away too often in dangerous areas. i cant wait for alexis to get back in the team.

Yeah as usual, the ever optimistic Wenger. I have a feeling we’re beginning to lose grip of winning the championship this season. It’s a familiar road. We top the league all through the yuletide, only to start dropping points through draws and all. I’m worried, last night only confirmed my skepticisms. Leicester looks to be a great contender afterall, a solid display against our rivals last night.

Let’s turn this around against Stoke city, we can’t afford to drop further points. Coyg

+ walcot really let me down but am very impressed with campbell he really is consistent be it against the top five teams or not, he is one who really has an impact.

Who ever said Giroud isn’t a big game player? Hump!

It may seem as though two points were dropped due to the fact that we conceded the equalizer in the dying embers of the game. The gaffer’s major grouse would be (aside the profligacy in front of goal) the lack of concentration in the dying minutes. This seems to be a regular feature at Anfield. Having said that however, we showed determination and grit, real character to get back into the game when we did and how we did. It stands us in good stead going into future games. My real worry was the Anfield game. I think Stoke won’t… Read more »

And and and, still ranting, another example is Rooney. They drew 3-3 with Newcastle and the bald granny shagger pulled one shot horribly wide. He was celebrated like some sort of superstar player all of a sudden because he put a pen in and bagged a decent goal for once. Against relegation threatened Newcastle Ffs. Nobody mentioned that miss. It’s all they would have mentioned had it been our big man. And giroud has perfect hair, he doesn’t look like one of the vultures from jungle book

When there isn’t any Arsenal news

Positives??? no, sir, sorry! With Ramsey thinking he can be Pirlo and Özil at the same time, while unable to be one of them, thinking more of his ego (that is surely happy with one goal and an assist) than of the basic of his job!
The positive for me is that it shows Ramsey has to be dropped as soon as Elneny is ready to play!

The second positive: NEVER TAKING OFF ÖZIL IN THE DYING MINUTES! City wasn’t enough to understand that?

Wenger said he was disappointed with the result at Anfield. I think rather he should be grateful,because if Liverpool had equalised five minutes earlier,they could have won that game.Substituting Campbell and Ozil,with Chamberlain and Gibbs being brought in and then Arteta,anything could have happened to us.Infact Wenger always makes the same mistakes in big games,he did that against Mancity and we almost threw away a two goal lead,and now against Liverpool, we came away with a point, next time,we might not be so lucky.

First half of my rant was so rant-like it’s being moderated. Apologies

Taken obscenities out – I can’t escape how ‘bleeped’off I am with the whole giroud bashing thing. The man should just change his name to ‘not world class’ as that’s all anyone ever ‘bleeping’ says about him. Yeah yeah, we should have signed a long list of better strikers such as Michu, benteke, ba, remy bla bla all ‘bleep’ and all worse. Giroud is unique and take him out of the team like we have in the past, and it just isn’t the same. He is judged by the shearers of this world on statistics which do him no justice.… Read more »

He got man of the match yesterday though….

2 points lost, simple as that. No positives or whatever.
We can’t keep passing up opportunities like these and expect to win the league ESPECIALLY with the teams we still have left to play.

We held a criminally deep defensive line at the end thus Benteke is heading the ball around the penalty spot and not ten yards outside the box. Similar to the 4-4 a few years ago where Benayoun equalised. Need to be stronger- that was asking for trouble.

Tall Humptious Giroud, he was most delightful the way he humped his way through ‘pools defence (and Sakho’s head). A fantastic and very manly application of his skills 🙂

On the bright side almost every other top side lost or tied except for Leicester and WH so we didn’t lose much ground. We’ve now got draws against Liverpool (Home and Away), Tottenham (Home) and wins over City and United (home) and Leicester (Away) with our only losses against teams in the top 6 (of course Liverpool is out of the top 6 now, but always a threat) so we’ve done pretty well against those teams we had struggled against (esp on the road) and prevented them from getting max points in our matches. On the down side we yet… Read more »

O frabjous day! Calloo! Callay!
He chortled in his joy.
[a poem]

O humptious day!
Up the Arse!