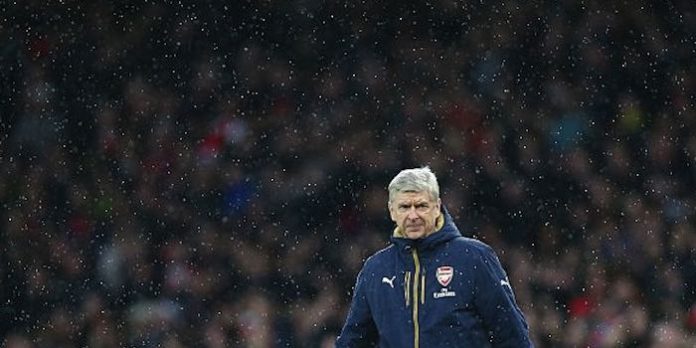 Arsene Wenger has praised Alex Iwobi and Hector Bellerin for their contributions to the 3-1 win over Sunderland today.

The Gunners are in the draw for round 4th round of the FA Cup after today’s win, achieved without Per Mertesacker, Mesut Ozil, Nacho Monreal, Mathieu Flamini, Santi Cazorla, Francis Coquelin, Tomas Rosicky, Jack Wilshere and Danny Welbeck.

It meant a full debut for Alex Iwobi, playing as the attacking central midfielder in place of Ozil, and the youngster impressed in the 65 minutes he played.

“I liked the timing of his passes,” said Wenger. In the middle of the park that is a vital quality and that fact he plays forward and sees things. As a young boy he is not afraid to come on and that is not easy.

“He was very good in the first half, he tired a little bit in the second half.”

Meanwhile, Hector Bellerin got two assists in a season in which he’s impressed from an attacking point of view, and that drew the plaudits from his manager.

“He became stronger and stronger,” said the boss. “Sometimes I felt in the last 20 minutes, every time he went forward he created a chance on goal.

“Look at the defensive and offensive numbers. The fact that he is only 20 years old, there is a lot more to come from him.”

All the better that we’re not manager by that one guy who chews gum with his mouth open, picks it out, throws it on the Emirates pitch, and then immediately plops in another stick on camera today… He shall remain unnamed…

What a slob, ‘that guy’ is… Even the way he sits, or rather lounges.

bellerin was incredible, yet again.

you can also add alexis sanchez to the list of absentees. almost a full XI. crazy when you think about it. we’re great now, but imagine if everyone* is fit and available!

*realistically that won’t happen, but i can dream

Also add Ospina, to make it a full XI.

Maybe a bit short on defence, but I reckon that line-up would win a lot of matches.

Debuchy right back, Monreal centre back and Flamini left back ala 2006? I know Debuchy is a bit of a tosser atm but he is still a squad player as we speak

That’s what I call strength in depth!

Easy to forget Bellerin is only 20; he’s already a really talented player. He could be frighteningly good…

“Damn, that kid is scary good”

Maybe I’m just delusional in my admiration for our Hector, but I feel like his aerial ability defensively is very underrated for a speedy, technical fullback..

He is already, imo..

Iwobi was class today. He likes to shoot as well. Very accurate for a youngster. Really wanted one of those to find the net!

Iwobi was very impressive today. I knew Wenger was a big fan of his but I was still unsure what to expect. He surpassed any expectations I had.

Like everyone else, I love the Jeff and wondered why he wasn’t getting as many opportunities as Iwobi. But based on this performance I can see that Iwobi is just a little more ready than him. The Jeff is already talented and will hopefully go on to be an amazing player but Iwobi has amazing technique, movement and decision making that justifies Wenger’s recent decisions.

Very excited for the future of Arsenal!

That pass from Bellerin to Giroud for the goal was may favorite part of the game. Absolutely perfect.

Agreed. Both that and the Kos pass to bellerin to make it happen were almost Ozillian.

I think it was Oxlade-Chamberlain, not Koscielny, who played that ball out wide to Bellerin with the outside of his right foot, but yeah, great ball.

Hmmm … and I thought it was Arteta. I tried watching the highlights (little grainy) multiple times to try and figure out who it was since I really liked the pass. I guess its still up in the air …

** not the pass obviously, since that already went in the back of the net … 🙂

What struck me as slightly weird in the post game interview was how AW just brushed aside the question about Ox’s display. I thought he did well overall . But if you watch the interview, AW almost cant bring himself to say anything and mumbles something about Ox being better in second half and jumped to Iwobi.

On the positive side , I really hope Ox doesnt fall back again with all the other players coming back (I know … )

Iwobi hasn’t done his chances of future involvement any harm, seems comfortable in the middle and with his burst of pace, lank limbs and smart movement he can function well out wide too, good day for him.

Joel Campbell had a brilliant game I thought. Even Ox played well, was actually impressed considering his poor form

Another good win. It’s a good habit.
Off topic anyone know if we will collect any shekels from the afobe transfer? We know aw loves a good sell on clause.

Wow, I think of rosicky, Wilshere and Welbeck is the same way think of piers, Henry and Ljungberg.

I’ve just checked through my collection of Arsenal annuals and don’t think Piers ever played for us; turns out he is just a gobshite in the tweetersphere 😉

😀 You know s(he) meant Pires, right? Would be great to get all home games in the tourney like 2 seasons back. Who cares? I just want the trophy AGAIN! add the BPL to that. We can talk about the Barca game some other time. #COYG

Bellerin absolutely outstanding today. I pinch myself when I realise he’s only 20 years old. His delivery is bang on! Impressed by Iwobi, Campbell and the Ox today, the latter still suffering from a lack if confidence but slowly recovering..

Given a few more years’ experience, Bellerin could be the best RB on the planet.

Seriously, I think he already me.

We used to attend Barcelona U games back in the day with my former girlfriend, she had some sorta cousin playin in the academy, it was fun. Anyway, there was an old, crazy catalan dude, going to every single game. He told us this Héctor kid is going to be starting right back for the Spain side for long-long years. I was like yeah, of course *drinks beers sarcastically*.

That’s some incredible vision because he played most of his football for the Barcelona youths further forward.

Hector’s best game since coming back from his mini injury which kept him out a couple of games. I thought for sure thd kid was not going to be able to keep up with that blistering start he made for us this season, but he was definitely back to his best y’day. Good start for Iwobi. Made a few errors as kids do but nothing that was too costly. Definitely one for the future. The Jeff had a great chance to open his account but not on long enough to judge properly. Still good minutes for him. Joel Campbell was… Read more »