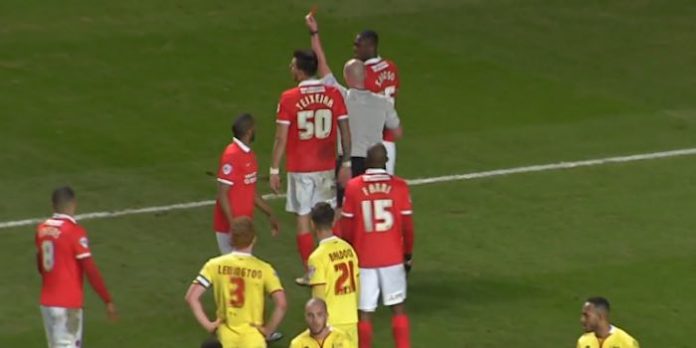 Yaya Sanogo has gone from sort-of hero to villain after being shown the first red card of his career.

The on-loan Arsenal forward hit a hat-trick for Charlton in a game they went on to lose 4-3, and in last night’s 0-0 draw with MK Dons he was sent off in injury time for a nasty off the ball elbow on defender Antony Kay.

He drew criticism from Dons boss, Karl Robinson, who labelled the violent conduct ‘disgusting’ and called on the Frenchman to be ‘banned for the rest of the season’.

“He’s clearly off the ball,” said Robinson, who was critical of the Charlton approach overall, saying, “Some of the challenges were borderline assault. I know it’s about fighting and competing for survival in one of the most difficult leagues in Europe, but there’s still got to be an element of control.”

“We don’t need this in our situation, certainly not.”

Sanogo will now serve a three match ban as the Addicks continue their fight against relegation. Silly boy.

He is Well Beck Now!

I think his reaction showed he realised he made a stupid mistake. Hopefully, he wouldn’t repeat that again.

EBOUE IS BACK IN THE PREMIER LEAGUE!!!!!

I was trying to think of some way to connect that to this and trying to remember if Eboue had any particularly ridiculous and nasty red cards, but my image is more just generalized incompetence rather than malice.

I wondering what the opposite player has said to Yaya……head up kid!!!
(Zidane and Materazzi)

Apparently Yaya’s mother was taken out by Kay for a nice seafood dinner only to never hear back from him again.

The lowest of the low.

Dong, where is my automobile?
Reply to  Chris

DOROTHY MANTOOTH-SANOGO IS A SAINT!

No no. Yaya. Naughty boy…

Something seems to have happend just before that provoked him. I’m not excusing the elbow, but does anyone know what that was?

well, Yaya is not known to be a hot head so, something must have been done to provoke him, and it does looks as if he was reacting to something in the video..lesson for him to learn for the future….as a striker, regardless of which level you are playing, defenders will always try things on to provoke you into stupid reactions like that to get you sent off and hand their team a numerical advantage. you keep calm, and if you’ve got to react, wait until you are back in the tunnels or player’s lounge!…..borrow a leaf from arsenal legend… Read more »

Not that I support violent conduct but I think it’s time we had a striker with a bit of nastiness about him. He already has the size, is developing the finish so adding a bit of nastiness would be great. That way defenders will know you can’t kick him off the park easily.

Developing the finish? He’s scored 3 goals in about 5yrs and all in one game.

That’s why I said developing not developed. Besides that, how many matches has he actually started? He’s a young kid still learning his trade. Not everyone is a Messi. Time will tell

He scored a hat-trick!!! Who cares about the elbow. I say we make Charlton unofficially our feeder club.

See Tony, I told you not to talk bout my mama

Clearly provoked by the defender and he threw his elbow in retaliation. A very stupid thing to do, but hopefully a mistake he will learn from. Some do, some don’t. I remember seeing Robin Van Persie lose his shit and see red more than a couple of times, so some players just have it in them. Fingers crossed this is just a one off.

Blogs, where’s the by numbers article from the hull game?

7amkickoff does them, and stats for FA Cup games are more difficult to get

Even when at Charlton, he now has the Arsenal DNA. Customary Red card.

Unreliable. Just the sort of inconsistent crap this club does not need. Score a hat-trick one week, get a three match ban the next. No focus, professionalism, no sense of momentum, no sign that he wants to stick one to Ajax, Koeman, Arsenal doubters (which, he must know about…!) Sorry mate, not good enough, better players are provoked all game, every week and don’t resort to this shit. If I was Wenger it would be bye-bye…

The other side of **Blue-London** is VERY QUIET..
Chelsea 2-4 PSG
COYG

Brandon that was a game of football I enjoyed lol first PSG goal gives them the advantage, the scum score and they think they are back in it lol the Ibrahimavic finishes them off – bliss!!!

Hey Brandon who was the home team ? totally dominated by PSG and thoroughly deserved the defeat – long may the chavs get beat ?

I like that Charlton fans have a song for him!

get this kid off the books. he’s absolute rubbish.

He’s 23 years old so not really a kid anymore. But I agree he’s a pile of horse shit.
Clearly will never be good enough for Arsenal FC.

I wonder what’s the provocation about, throughout his time at Arsenal, he doesn’t seems to have that ‘violent conduct’ in him.

This, i guess, one of a serious flaw in the game, where verbal provocation has no limits, and always the abuser gone unpunished.

This guy is an embarrassing reflection on what is an otherwise classy football team and I’m talking about Charlton, why he even has a sniff of being a prospect for Arsenal is beyond me. It’s this type of mediocrity that we have tolerated with jokers like Sanogo, Julio Baptista, eboue that has contributed to our failings #MakeArsenalGreatAgain

I live right next to the old Plough Lane ground and so I know lot of AFC Wimbledon fans. Yaya Sanogo has become a hero overnight down here!

Why is everyone reacting like he just bit someone? Defenders now know that messing with Yaya is-Sanogo