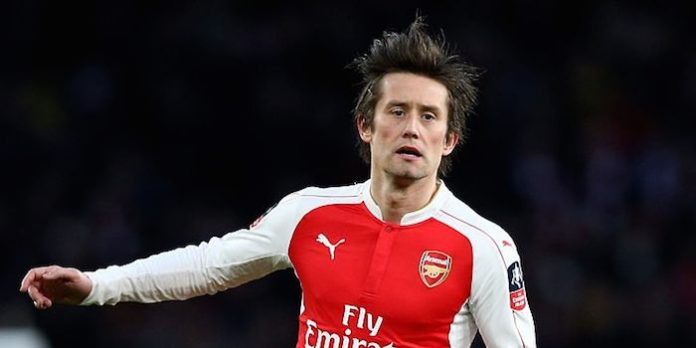 According to his agent, Tomas Rosicky has been contacted by clubs in the US and the United Arab Emirates, while former club Sparta Prague have also confirmed their interest in signing the midfielder.

The 35-year-old will celebrate a decade as an Arsenal player in 10 days time, but won’t be offered a new deal when his current contract ends in July.

Speaking about his client’s desire to continue his playing career, Pavel Paska told Czech press: “There are options to play in the USA and the United Arab Emirates, but his immediate concern is securing a call-up to the national team.

“He can still do something at the European Championship. Tom wants to play at football’s highest level for two more years.

“Of course, we think about it,” he continued when asked about a return to Sparta Prague, the club at which he launched his long and illustrious career.

After Arsene Wenger’s comments this morning, Sparta Prague immediately released a statement to confirm that Rosicky remains of interest to them:

“It still holds true that Tomas Rosicky is an interesting player for Sparta and that there’s an interest in his services.

“Representatives of the senior management team are also in close contact with the player’s manager Pavel Paska.”

So lots of options for Super Tom, a player who despite all his injuries has maintained his status as a terrace favourite. It’ll be sad to see him go, fingers crossed he gets a chance to say goodbye on his own terms on Sunday.
__

Cheers to @RYO_cleverfish for the heads up

Perhaps one final piece of magic from him against Villa at the weekend. Sure would be a lovely send off

Agreed. My favourite player over the last decade. TR7 you’ll be missed. Come to Toronto FC! Then I can actually like my local!

i would love to see him and giovinco link up!

No, come to Vancouver. Please!

He’d look much more fetching in a Rapids kit, I think! 🙂

I’d have to say I’m a red bulls fan because of you know who but if Tom turns out for someone next year I’m easily swayed!

I’d love to see him pirouette the ball in for goal number 7 as his final action in an Arsenal shirt.

@Ryo_cleverfish just reminded me of another Ryo! What happened to Miyaichi? ?

Cone but not forgotten.

*in a nutshell (pine cone)

Joined Sankt Pauli, promptly got injured. Only made his debut last month.

Everyone’s got a Tomas rosicky goal out of no where favourite haven’t they? Gutted to see him go

Didnt even realise Czech republic qualified for the Euro’s
Lets hope he doesnt get injured in his last game for us thus missing any chance of going to the euro’s – yes i said it!!!!

I think it would be really nice if he could go back to Sparta. That’s his boyhood club and I think it would be nice for him to give a little back to them. It would also be great if he could get regular game time. He (and people who love football) deserve to see more of him. I might be crazy, but he’s always been my favourite player since he joined. He makes the game look effortless, and he seems like a top bloke. I also think it’s great that he’s a metal head in a sea of footballers… Read more »

He is already a genuinely nice bloke and a footballer. His music taste just makes him irresistible.

He’s actually the reason I started watching Arsenal games after his move from Dortmund. Now he moves on, but I’ll stay. Thanks for the great moments, Tomas. Obviously a shame he’s been out so long over the years. Amazing player to watch. Didn’t score loads of goals but when he did, they were usually screamers.

Let’s kill the game by halftime so that we can give Super Tom, Arteta and Flamini a proper send off!

I’m thinking a wonder goal from Super Tom, a penalty from Arteta, and then a clumsy, lunging tackle from Flamini that results in a yellow card.

Not sure about Mikel and Flamini but I really hope Rosicky plays some part against Aston Villa. Just boils my blood watching that waste Theo come on every game (ahead of Campbell). Theo can sit out one game. Anyway his chances for the Euros are very bleak

doubt theo gets any game time on Sunday, he’s def on his way out.

Would love to see him in MLS.

Despite his age, I feel he can still contribute coming off the bench. I would love to give him one more year! Suuuuupppeerrrrr Tom!

Oh Rosicky… I’ll always remember how immense he was in the tail end of 2011-2012 for us, especially the absolute blinder he played against the scum on 26 February 2012, my favourite North London Derby. Magnificent.

The goal on 4 March 2014 against said scum was also excellent!

Hey Little Mozart, we’ll miss you so much, wish you all the best in your future endeavors. It’s so sad indeed injuries did not permit him to be with us longer!!! Wenger, please give him a chance to say bye!!! He’ll always be my player!!

Loved it when we signed him then he scored a couple of belters in the euros, I was so excited then remember him scoring another screamer in one of the first few games for us, great player great bloke, he will be sorely missed

Does he get a testimonial in the summer?! I bloody hope so. He’s been class. Testimonial vs Sparta Prague and he plays a half for each side. Perfect

If we cannot find time for the Emirates Cup then a surely we could squeeze in a Rosicky testimonial. One of my favourite Arsenal players of the past ten years, especially against the Spuds.

Absense really does make the heart grow fonder .. I already know this will be thumbed down but could someone tell me what exactly is the reason behind this immense love for a player that has been injured longer than hes actually played ?
Where was this love for diaby ?

I hope he gets the biggest reception possible this weekend. A true gooners and a complete gent

Love him to bits…he’s just gotta get some game time before he goes. …

Won’t be surprised if he goes to Prague and plays the entire season..

Please one more year, a rolling contract or something.Really sad it had to end like this.

One of the most talented and hard working players we’ve had on the past 10 years. Out of all our attacking midfielders only Ozil and maybe carzola would I pick ahead of rosicky and that’s just me trying not to be biased. If I was the manager once he’s for he starts for me.

Again please a party as you play contract for one year.

Pay as you play *

Thanks for the memories Super Tommo one always comes to mind the goal against $pur$ now that always worth a shout out i hope he can get even 30 seconds V’s the villa worth every one of them his soul & DNA are inbedded with AFC, and lets hope he can carry on some were playing sharing the love, passion & desire best wishes old school legend

Come to A-league as our marque player ( Perth Glory )

Thanks for all the grace on the field and class off the field. When I teach my daughter what’s the right way to play I always show TR7. Please come to Red Bulls, I need a reason to watch the MLS.

We could use Tomas in the MLS. Come to Colorado, since we’ll need to score more after getting Timmy Howard as GK.

I just want to see one more outside of the foot curly pass and a flexy muscle bull horn fingers celebration! Is that really too much to ask????

C’mon Little Mozart, I want to see you sporting an LA Galaxy jersey next!