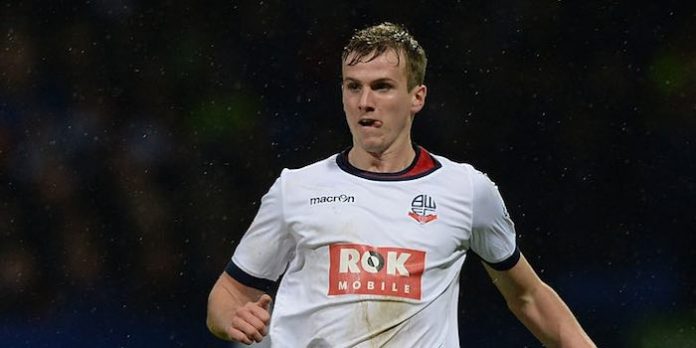 The Bolton News report that Arsenal have had a £5m bid for Rob Holding rejected by Bolton Wanderers.

The Gunners have been linked heavily with the 20 year old defender in the last couple of weeks, and the Player of the Season was left out of the side for the final game of the season in order to ensure he didn’t pick up an injury that might scupper any potential deal.

The report says that Arsenal’s offer rose, with bonuses, to £5m, but Wanderers are holding out for something closer to £7m.

It’s not the first time the Gunners have gone in for a Bolton defender, famously missing out on Gary Cahill when they offered £19.99, a bag of fertiliser and a breast milk pump for the centre-half who then went to Chelsea for £12m.

It seems clear there’s obvious interest from Arsenal, so let’s hope they find a way to make this one happen if he’s a player we really want.

If Arsene thinks he could be the real deal then pay the going rate, that’s fair enough.

Looking forward to reading that’s he joined Everton for 5 million and a pound next week.

Make up your mind

Well at least we seem to be in the transfer market already!

I’m writing this on my mobile on the train to the villa game and the connection wasn’t great & posted when I didn’t want it to, hence grammar mistakes.

My phone autocorrects Everton to Bournemouth as well. Annoying.

We are such massive cunts when it comes to transfers.

Kosc' other Pocket
Reply to  Mike

When did cunts become a bad thing??

Holyviper
Reply to  Kosc' other Pocket

But massive ones are, you see. You want transfer cunts to really be small (read quick), purpose-driven and joy-giving.

Holyviper
Reply to  Kosc' other Pocket

But massive ones are, you see. You want transfer coonts to really be small (read quick), purpose-driven and joy-giving.

Bolton HOLDING on for more money

I’m not too ashamed to say the exact same joke occurred to me upon reading the article – sadly you beat me to it! Obviously great minds think alike (or something like that) 🙂

Why are people obsessed with these double entendres, I don’t get it. Not funny at all!

… He says completely disregarding his own username.

You could say that £7m is daylight ROBbery

We also missed iut in Higuain over a couple mill we were not willing to spend. Napoli snapped him up for 30 something mill. He now broke the goalscoring record in Serie A this season with 36 goals in 34 games.

The record of 35 goals had stood since the early 50s and was thought near unbreakable.

To be fair, if they accepted our first bid….wouldn’t that mean we bid too much?? Unless we coincidentally bid the exact amount they’re looking for. That’s why they’re called “transfer negotiations”.

Exactly Handbag. A little premature with the reactions here.

ARGH! Can’t believe Arsene ate ANOTHER baby! Actually I can!

Looking forward to him ending up at Bournemouth!

WHY NOT JUST PAY THE £100mil THEY WANT AND GET IT OVER WITH!?

We know it’s just sitting there in Arsene’s dog’s bank account, the daily mail said so!

It’s rather amusing that a not insignificant number of fans get ticked off and ‘demand’ that Arsenal simply pay whatever the other club wants.

I’m going to have to assume these people are in absolutely no position of influence or power in the companies they work for in real life.

I am in a senior management position so I carried out a SWAT analysis on Arsenal transfers, and the result came up as “spend some fucking money”!
🙂

Are we going to miss another one because of not offering enough money?
Hold me I’m scared!!
😉

From what I’ve seen he looks like a good prospect.

Mr. Wenger please buy him if you if think he’s got what it takes.

Look what happened with our Cahill bid and Chelsea got hit him for a steal!

We’re HOLDING out for a hero!
Really sorry…:-)

Can he play in midfield as well? Hope so, cause then we finally have a genuine Holding, Midfielder

We need this deal to go through so the commentator can say:
….”Arsene has named two central midfielders today – one midfielder is Holding, the other one’s Coq”…
Sorry again, that’s the last one, I promise.
😉

I’m pretty sure they sold Cahill for £7m having abused us publicly for offering about £10m… Bolton logic, no wonder they’re in league one now!

If only he was a midfielder

I know 🙁
Poetic licence??
Or…”two players scored today, one was holding the other’s Coq”
anyway I’ll get my coat…:-)

They must be “Holding” out for more. Hahaha

Better spend some money on Hoffenheim’s Niklas Süle if we want a Mertesacker kind of player (tall, good interceptions and reading of the game, being faster than Mert too, but ofc even a two legged turtle is faster than Per)

Got to say it doesn.t sound like we are taking the piss. 5M for an inexperienced, relegated championship defender at a bankrupt club seems quite generous

Nobody accepts the first offer