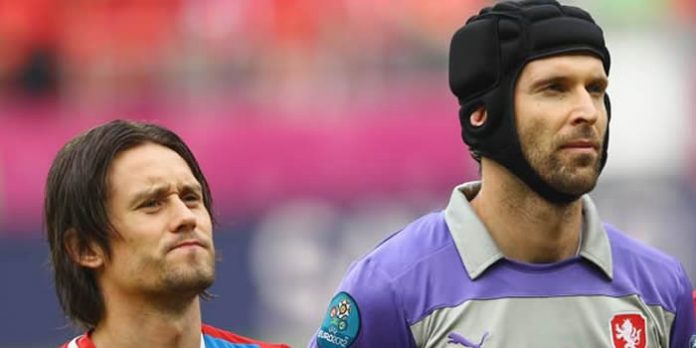 Despite not being able to play one more time for Arsenal before his departure for the club, Tomas Rosicky will have a chance to pull on an international shirt once more having been included in the Czech Republic squad for Euro 2016.

The 35 year old midfielder has been included alongside Petr Cech for this summer’s tournament, hoping to odd to the 100 caps he’s already received.

Speaking to the official site earlier this week, Rosicky spoke about how difficult it was to leave Arsenal, having seen a generation of young talent grow up in his 10 years at the club.

“It is very difficult to say goodbye after 10 years when you know everyone at the club,” he said.

“All the young English guys when I came here grew up alongside me, I have seen them since they were 16 years old basically – Jack, Theo, the Ox, Aaron and Kieran Gibbs, so many.

“I have seen them grow from little lads to the big players they are now and this makes me proud that I had an influence on their growth and education. That is why it is really difficult to leave.”

And hopefully we’ll get to see him do something like this one more time.

Happy for TR7. I hope he gets a little playing time. would be wonderful to see his magic again.

Now I just have “Yesterday” by Boyz II Men stuck in my head.

Non sequitur- this new font on comments is disgusting.

Can you send me a screenshot?

Most of our midfielders lack his tenacity. Love you rossa. Jack probably learned a lot from him. Especially this skill https://vimeo.com/63615795

I remember Stuart Robson saying he’s not a player who throws himself that much and lacks getting stuck in.
I just wanted to slap this in his face like a wet fish

I hope he has an absolutely wonderful tournament, he deserves that much.

Hope this gives Tomas a chance to bid his fans a proper farewell before retiring from international football. Viva TR7!

What’s with the new format? Not that there’s much difference between the old and new, I just wondered what the rationale was.

Actually, I’ve noticed a slight annoyance. I generally close the ‘other stories’ pop-up on the side of screen straightaway so that there are no pictures on the screen, but I need to go full-screen to close it now, with the new format.

It would be better if either the pop-up could be disabled or if it appeared at the bottom corner of the screen.

Do you mean the ‘more stories’ here: http://i.imgur.com/lZqk21H.png

I can just close it with the X. I don’t need to be full screen either. What browser+ OS is it?

What X? Neither IE11 or Chrome work properly.

You don’t see an X in the top left, across from the word ‘more’?

It’s not that there’s no X, it’s that when I’m not in full screen the X is obscured, so I have to go to full screen to be able to click to close.

I don’t tend to have the window in full screen so as to avoid showing pics/ads that make it obvious it’s not work-related! It makes it a bit annoying, having to maximise every time I go to an article/refresh the page to get rid of the pop-up.

It wasn’t a problem on the previous format, as the X was always visible.

Site is absolutely buggered for me – the main blog site looks fine though?

Clear your cache and see if that helps.

It’s the same format, really, just slightly updated. Happy for the feedback though – what’s pants about it?!

It is only bad on when I’m using the phone or iPad. On the desktop it works fine but the mobile screen doesn’t have the x to remove the “more stories” link. we’re just creatures of habit I suppose. Just tried it on android and it is even more chaotic

I don’t get the more stories on mobile. Haven’t tried iPad yet.

This new format is pretty horrible. Can’t make the “other stories” box go away. The Courier font for comments is dreadful. The screen used to be nicely organized, now stuff is all over the place. The “next story” and “previous story” links are shrunken and hard to find. Why is it being “fixed” when it wasn’t broken in the first place?

It’s definitely not courier for the comments. It shouldn’t be anyway.

In terms of layout, it’s should also be very similar. Can you clear your cache and see if that does anything?

We had to do some tinkering under the hood, it’s necessary from time to time. And we do have a few things still to tweak.

Whatever you did, it worked! Much better looking this afternoon than this morning. Fonts seem to have settled down, the Other Stories box has its little “X” back, and the next and previous story links are much better. Thanks!

Wanna see him turn shimmy and bamboozle defenders with a bit of suprise pace !

I like Tomas, but Czech Republic must be short of players…

I still feel like he could play for us. As you can tell my love for Tom is strong

Remember when he scored that goal I was so excited to see him play for us. Didn’t know much else about him before then, besides those goals he scored in the Champions League in 02/03 (I think). While it’s fair to say injuries mean that there’s an element of what might have been, he’s still been a massive influence on the club. Hope he gets the swansong he deserves this summer.

It would finally see our Rozza play..
Extremely happy for our Legendary Mozart.

I remember watching that match on TV. It was right after we’d signed him, and the commentator cried out “They’re gonna love him at Arsenal!”

Hey Blogs,
A little off topic but is it only my screen that’s buggered?

The comments section has a huge amount of contrast (can’t see the profile pics) and I can’t make the stories box go away. That and the ad’s cover pretty much bottom and right side of the screen.

I need a screenshot please! I’m not seeing any of this.

First, clear your browser cache – and if you want to email a screenshot it’s thearseblog at arseblog dot com.

We’ll get it sorted!

By way of feedback, the new format on mobile iOS Safari is showing a lot of repetition of articles. Plus the Rosicky Euro story isn’t showing as the most recent in the Home section.

It’s back to mostly how it was now. I liked the brief big picture display before you clicked on the article so if that’s coming back then I’m all for it. One of the things I really like about Arseblog News on mobile browser is that all the news articles show in one place. You don’t have to click into the sub-headings to get to new articles.

Also, thanks for all this.

Same here, stories boy is there to stay no way to get rid of it, old format was so much better… Why change it when it was working great.

Is this on mobile or desktop?

iOS mobile looks same as ever for me on iPhone, perfect

But on topic, I’m really happy for little Mozart and really hope he gets to play

I think the czechs will be my main team at the euros. Given, you know, England and all….

really happy to see tomas picked and will be even happier if he gets some playing time. i’m still hoping he gets his testimonial at the emirates.

for what it’s worth, i’m using chrome on a desktop and the new site and format look great. i even like the font, i find it easier to read. and this is coming from someone who generally does not like change and likes to complain about things.

What a player he was at his prime, I still remenber his goal against spuds 2 years ago, like it just happened. Thanks for the memories Thomas

Why are we letting him go? Surely hes a good player to play once in a while and to have around the squad

This news has made me far too happy. Can we have a Rosicky-watch liveblog just for Tomas at the Euros please Blogs?

We don’t talk enough about his goal against Brighton. Seen it described as “Rosicky dribble, no look pass, chipped assist pass (Giroud), volley, goal”. Followed by him raising both hands in the air like the Chief Whitewalker.

If you’re gonna beat lower-leagues opponents on the way to winning an FA Cup, you do it in style, and TR7 had plenty of that.

Something is definitely wrong with me. My 6 year old son sang IHA to me last night and leave let out such a loud whoop I startled my wife.
5 days later and am still smiling, football is beautiful people, let’s not forget that in our Out / In issues

Just letting you know the new format’s working fine for me – I’m on a 2014 Macbook Air browser, like the fresh look!

This is just excellent news. Come on Tomas!