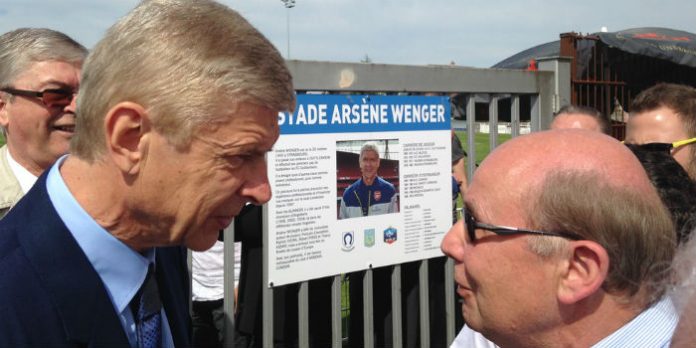 Arsene Wenger has had a stadium named after him in the village of Duppigheim, three kilometres from his childhood birthplace Duttlenheim.

The boss officially opened the arena, which features floodlights and a grandstand for 500 spectators, this afternoon and stayed to talk to locals and pose for selfies.

At the inauguration, Wenger spoke of his surprise at being honoured in such a way said he hopes the venue will provide inspiration for youngsters.

“I hope this will show young people here that there should never be obstacles to dreams, anything can happen.

“When I was a kid, I never thought I’d coach a big club. If this contributes only to that, it’s already a good thing.”

Peter Troesch, president of the club that will play at the Stade Arsene Wenger, added: “He deserves to have one in every village in Alsace and France.”

Looks like it was a fun day out for the boss…and dare we say it, not an A4 banner in sight.

If you want to learn more about Wenger’s childhood in the region, check out the subtitled video we posted a few weeks back.

Beautiful. He deserves all good things that come to him. No doubt he’ll have a statue or stand once he’s gone.

Both would get my vote

It is beautiful, and he’s a great man. Oh man, what happened to that feeling I had a month ago that Wenger should go? I just love him! I’m stuck in an unhealthy relationship!

There indeed is only one Arsene Wenger.

Yes, rename the Emirates after him too.

Took the words out of my mouth!

Although I think the economist in Wenger would prefer if we kept that sponsorship money rolling in.
Perhaps Arsene Wenger’s Emirates Stadium?

I’m sure he’ll at least have a stand named after him and a statue outside at some point in the future. He would have to win a Premier League and Champions League double next season to warrant having the stadium named after him any time soon though.

And change our sponsor to Fly Arsene Wenger

I thought he was a specialist in failure.

In other news the person who called him this will soon have a bus station named after him.

Bums will come on pilgrimages from far and wide to take a leak on it.

I think it would be a bit more fitting if he had a bus depot named after him… Perhaps it could even provide a new source of employment for John T*rry after he gets unceremoniously dumped out of Chelsea next season?

This makes me happy, its good to see that Arsene is respected and admired (despite the best efforts from the media and plastic fans to belittle him). I do think he should be replaced next season, but until then I will support Arsene with my whole heart, and I hope others will too

There was no need to say it!

Nice touch from his locals

And yet that stadium will still be better than whatever Sp*rs build.

Well of course. Not having Sp*rs in it is a huge improvement for a start.

Very down to earth

So happy for Monsieur Wenger. Shining example for younger generations of Alsatians, and more.

I would never argue to the stadium being named after him, he deserves it, he essentially built that stadium himself.

But I still believe when it was built it should have been named Ashburton Grove or after Herbert Chapman.

Built in the right spirit.

you missed one ‘top’

Here’s logic: With all the success Mourinho has had, do you think ANY of his clubs will honour him the way MU honours Fergie, or Roma will honour Totti? Arsenal will honour Arsene whe’s he gone for sure, because we remember people who have come good by us. This is proof that consistency is worth it. Longetivity is the real proof of quality. This is why real mettle is tested in Test matches of cricket. Arsene will always be a legend among coaches of the world, and paradigm shift at arsenal. I wish he get’s the trophies he’s deserved all… Read more »

“you’ve just joined us on a glorious day at The Arsene Arena, where Iwobi’s hat trick has confirmed Sp*rs’ relegation to the Payment Protect Insurance Championship”

Mr. Wenger should have said, “I want all the players to express themselves and not play with the handbrake on.”

I want to name my house after him too, well, if I can ever afford one.

There’s Only One Arsene Wenger

If it’s in honour of Wenger, why didn’t they call it “The Fourth Is A Trophy Stadium”?

Cause that would be in honor of “The Fourth is a Trophy”. Just saying. You don’t have to like him or the stadium or the locals of the town, but for god’s sake stop dissing him in every article. It’s getting a little tedious.

Because we are no longer in fourth, we are third, now second or higher. Stay current mate.;)

United may have won the FA cup but they did not retain Cl qualification which we did last two seasons prior.

We are not as poor as the media may deem to suggest.

Because we finished 2nd fatty

And everything is all right.
Wenger got a beep from Pete, and he can fuck (about on the pitch) all night.
Called up the players and he’s askin’ y’all
Which park, are y’all playin soccer ball?
Get your ass up here in this 500 seater, I’m in trouble
Last week fucked around but still burst the Spurs bubble.
Freakin players everyway like M.J.
I can’t believe, today was a good day (shit!)

http://www.espnfc.us/club/liverpool/364/blog/post/2878333/jurgen-klopp-deserves-criticism-for-liverpools-mediocre-season You want a stagnant team? Look no further than every media’s favorite team ‘in transition’ for the past 2 decades, still out of CL four seasons running and with a manager who listens to 50 year old music. Why complain about Arsenal. Granted we know we can do better but why all the excuses for Liverpool always in the media. The criticism of us is frankly amplified and excuses made for other teams. Same with certain players on our team who are favorite targets like Giroud, Per and Flamini where the errors of Walcott, Gabriel or Elneny get conveniently… Read more »