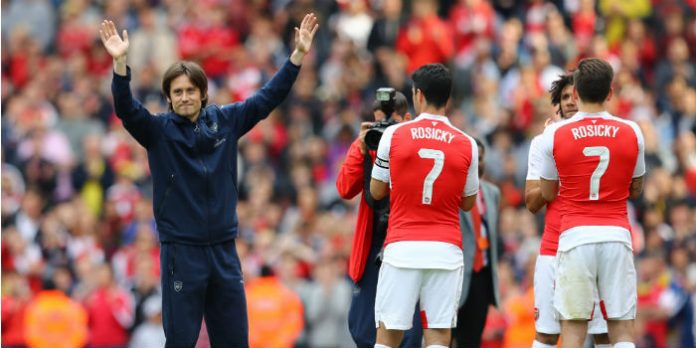 Arsene Wenger admits Arsenal will miss the experience of Tomas Rosicky and Mikel Arteta next season.

The duo, along with Mathieu Flamini, drew a line under their respective careers at the Emirates as the Gunners 4-0 win over Aston Villa, coupled with a Sp*rs 5-1 defeat at Newcastle, secured a second place finish in the league.

An emotional Arteta came off the bench to force an own goal with the last kick of the game, while Rosicky found himself the centre of attention following Olivier Giroud’s second goal as the players ran to him in celebration even though he wasn’t selected in the matchday squad.

“It shows that in football there are still positive emotions,” noted Wenger of his players’ decision to pay homage to the veteran Czech.

“Tomas Rosicky was first an exceptional football player and highly respected in our dressing room.

“It was a very sad day for me yesterday not being able to pick him to be in the squad today because there was something at stake.

“We lose him. We lose Arteta – two exceptional football players but also two leaders in the dressing room.

“I am convinced that in the bad periods they were a positive influence on the squad and we will miss them next season.

“So I would like to thank them for what they have done and wish them the best of luck.”

Arteta was left in tears at full-time but returned to the pitch minutes later sporting Rosicky’s number 7 shirt as the entire first team formed a guard of honour for the 35-year-old.

There’s no confirmation yet where the Czech will play next season although his agent revealed on Friday that former club Sparta Prague have been in contact and sides in the US and the United Arab Emirates are also interested.

Haven’t been able to wipe this stupid grin off my face all day long and my colleagues probably think I’ve gone looney but I don’t care.

It has been such a frustrating and shitty season, yesterday’s events just made up for all those horrible moments and that grin is completely understandable. Don’t get me wrong, I think we should have won the league this year but anyways… check out the latest 606 podcast, there’s an Arsenal v Sp*rs supporter going at it and it’s just hilarious.

OMG Tottenham is so shite! ?

Yeah, why is there hardly any mention of Flamini?

Where’s santori when you need him?

He is not officially leaving, could possibly get a one year extension I think as all but cazorla under 30 in midfield

Thought Arsene mentioned losing three big personalities or something along those lines during the week?

Rob the chef is the third one of those.

It was bloody Aston Villa. We surely could have included Rosicky in the squad instead of Iwobi maybe. I thought he had a slight niggle or something. Damn will miss this guy so much 🙁

Landed in Kuala Lumpur to find out the second place switcheroo. I had to keep my emotions in check though because I would have looked suspicious as nobody can be that happy after a 12 hour flight.

SEAN, WHAT YOU MISSED ! Why on earth would I want to be bothered; a season when the Gunners should have either become Champions, or at least very, very near. We’d already blown it 7 or 8 weeks before – we were just in a procession behind Leicester and Sp*rs, with a good chance of blowing Champions League qualification completely. (look out for that expensive rubbish from Manchester..!) THEN SUNDAY AFTERNOON. Wonderful, wonderful Newcastle ! So beautiful, so complete, when all the “experts” were saying Sp*rs would win or at very least get a draw – even if everything went… Read more »

Very interested in the reason why Flamini wasn’t mentioned. Smells like an one-year extension. Wouldn’t be too angry about it given the fact that he is Mesuts friend.

No. Flamini out. No more shite players. Ox, Flamini, Walcott, Giroud. Bunch of shite. Out. All of them.

Yeah, get em out, all of em, bunch of shite. Not having it any more, fuck the lot of em.

Can we get rid of the shite fans too? We’ve got a 60,000 capacity stadium half full of whingers. Get em out, all of em. If you don’t sing you can’t come in. And take your fucking muggy banners with you.

Surely not the ox? Flamini and Walcott must go, Giroud is good for the squad we need versatility going forward don’t throw the baby out with the bath water.

It wouldn’t shock me if it was true. No sense in keeping him if we’re truly getting Xhaka/Kante.

Xhaka Kante, one of the great R&B singers of the 80s.

I tip my cap to you.

Still surprised that there’s been no mention of a testimonial for Tom.

I liked the veiled dig at the moaners from Wenger -‘it shows in football there can be positive emotions’.

In other words – yes, you can be disappointed thing didn’t go better but for the love of Christ stop criticising every-fucking-thing.

We had people doing their nut about TR7 not being picked yesterday. Same people would have gone nuts if Spurs had lost and we didn’t win cos we took the game lightly and played the retirees and kids

Feeling my age, and feeling sort of like an era is closing for Arsenal. Maybe it’s just the sentimentality of the end of season, but for some reason this year is hitting me hard. All the best to TR7, my favourite for some years now. How I wish Little Mozart’s career wasn’t so injury riddled so we could’ve seen so much more of his wizardry. To Arteta, who I was soooo excited to see come to us from Everton. True class was never better exemplified. And to the Flamster, who seems to be overlooked in the Gunners that are leaving;… Read more »

ahhh rosicky what a legend

Wonder if I should retire my username..

It should have be a fun fare if we won the league…little Mozart (rosicky ) deserves more than this,.. But I wish him happiness always…..

Gonna miss Rosicky, he was a great fit for the system and drove the team forward when he played. Shame he had such problems with injury, it robbed him of so much time he should’ve spent on the pitch. Still, I’ve got my #7 Rosicky shirt to remind me of the good times.

I cried when I saw the players celebrate with Rozza, and again when Arteta cried.

And then i looked at Spuds and laughed my arse off.

Go to MLS Tomas! You will be able to influence games over there like you use to and the lighter schedule will be less demanding and more forgiving on your body.
Drogba and Robbie Keane are still scoring in this league. Tomas’ energy and craft would prolong his career and Rosicky of all players deserves to get some lost years in football back.
Just have a feeling that any top Euro league will see Tomas back in the treatment room.
Come to America and be a star again!

I hope we get to see Rosicky feature in the Euros.