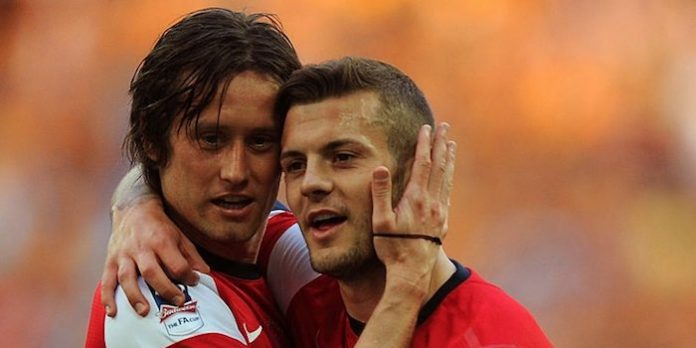 Jack Wilshere has paid tribute to Tomas Rosicky, who is leaving the club this summer after 10 years in North London.

The pair have been teammates, and compadres on the treatment table over the years, and the midfielder hailed the influence of the Czech international on his Instagram.

He said: “This guy has been with me since the start of my career, through thick and thin and always showed me the way when things have been tough.

“Going to miss him around the place and even more on the pitch. It’s been a pleasure my friend and I wish you all the luck in the world. #TR7.”

Rosicky’s agent has confirmed that the player has offers to deliberate over this summer, and Arsenal fans will be hoping to see him pull on the shirt one final time this Sunday against Aston Villa.

Wilshere himself might be in the starting XI, with Arsene Wenger saying his fitness and the run out he got against Man City makes him ready to play.

“He can start,” he said. “He played in a very intense game. I believe he can start, I haven’t decided yet but there is no problem as to why he couldn’t start. I consider him a player who is ready to play.”

Remember the invincibles
Reply to  spinner

When a club legend leaves, he should get better than snide underhanded insults.

Rosicky has been one of my favorite players at the club, but let’s take it easy with the “legend” talk. Henry, Bergkamp, yes, legends. For example.

More of a cult hero. But a legend in our hearts

Fabulous
Reply to  Remember the invincibles

Although I agree with you it’s hard not to ignore the light side of it. I actually think it’s funny ?. I know we’re Arsenal fans but lighten up!!

But would he be happy not to play against Villa for Tomas to? Sounds like it, love in the air.

This one hurts. TR7 still has plenty to offer in a red shirt. Part of me feels he can still play a role in the midfield. AW should give him 1 more year & the chance to play healthy. Too much unfinished business with this guy and this club

not deluded
Reply to  JB

Agree, but the Wenger outs would have a field day.

We will miss him. An awesome player.
AW never did start him enough when he was fit , preferring lesser talented players to fook it up week in and week out while TR7 sat and watched from the bench.

Really? Evidence? Or are you just trolling?

What a talent. Injuries have had an impact, but we were lucky to witness Rosicky at the peak of his powers on many occasions. Just wish we could have sent him off with a league winners medal or two

Whoever is going to tomorrow’s game, please sing “We want you to stay Rosicky”. I think he could still play part as an important squad player for one more year and it would be nice if we could win the Premier League or even the Champions League for his loyalty to us. By chanting his name it is possible that Arsene or Tomas himself might stay. So whoever is going to the match please chant his name as he deserves it. #TR7 #TrueGunner #Legend

Despite his injury crises, i doubt if any gooner dislikes Rosicky. I hope he get showered with love on more time on Sunday afternoon. Great guy.

Arsenal’s recent history could have looked alot brighter if injuries had not robbed us of Great players such as TR7. Good Luck to him and may he find both fitness and sporting success whereever he goes next.

Thomas Rosicky…. This name will remain in the heart of mine and I believe all true gooners for ever. Thanks for the memories. You were a true gunner and gentleman.

The last vestige of the wengerball era circa 06-11

I’ll always remember his goals against Tottenham. Especially when he flattened Danny Rose and chipped their goalie. Scenes.

Will miss all three of this guys a lot feel sad to see them leave. Wish we could give them a place in the coaching team that’s a lot of express that can be taught to the future gunners

Whoever is going to the game tomorrow please sing “We want you to stay Tomas Rosicky” as I feel a 1 year contract could still be possible due to his loyalty and playing ability despite being 35. If we sing his name it could still influence Arsene or Tomas himself to stay at the club as next season it would be nice if we could win the Premier League or even the Champions League to reward him for his loyalty. So please sing his name tomorrow to all Gonners!!! #TR7 #TrueGooner #Legend

Does anyone know if he’s likely to play for the Czech Rep at the Euros? Would be good to see him play again.

But lol at that comment we should give him one more year, no offense.

He’s in the provisional 30 man squad for the Euros. The coach he’s likely to take him to the Euros. Final 23 is named on Thursday lets hope he is in it.

True legend, despite all his injury troubles. He could’ve had a much brighter career, but he still managed to carve his name into our hearts. All the best to Tomas!

Rosicky had a fantastic final season…worth every penny.

Why always upset? I’ve never understood this type of behaviour. Being a pessimist in most aspects of life must really suck.

Shame on you Fats.

Clear down votes baiting, not funny.

No, I just think his mental age (at times) is far lower than his waist size.

Love you TR7, can’t wait to see you tomorrow

Yo, Fatmo, did your parents have any children who lived?

He’s a likable guy, but I’m glad he’s off the books soon as with his injuries he’s been a waste of wages. Given how permanently crocked Wilshere and Welbeck have been I’d be happy to see them out the door as well.

Yeah, they say the same sort of stuff.
The “comments policy” prevents me from continuing this comment about the two scoundrels..:-)

TR7,is ever best !example against Totnham
Arteta best leader
Flamini . His Commitment & covering others . I think this will be a great lose to the club if they tired or leave Rosisky is different

Deserved to do a lot more in his career. Rosicky, Diaby and Eduardo. We would have been a different team if these guys had fulfilled their potentials.

Yeah. I was particularly gutted about Eduardo – the guy was absolute class. We could well have won the league that season if it wasn’t for that thug Taylor.

It’s sad to see Tomas leave us. Given our forward situation, it hurts even more to lose a forward in Flamini..

“He can start,”
“I believe he can start,”
“but there is no problem as to why he couldn’t start.”
“I consider him a player who is ready to play.”

Thats Wilshere on the bench then ; )

Why won’t we have a testimonial this summer? An Arsenal-Dortmund game would be lovely. He was OUR GUY during the dark years.

tomas rosicky is the best player of all time for arsenal.no one can compute with him..if i am a coach of arsenal i would never let him go..because if u love foot ball u love tomas rosicky