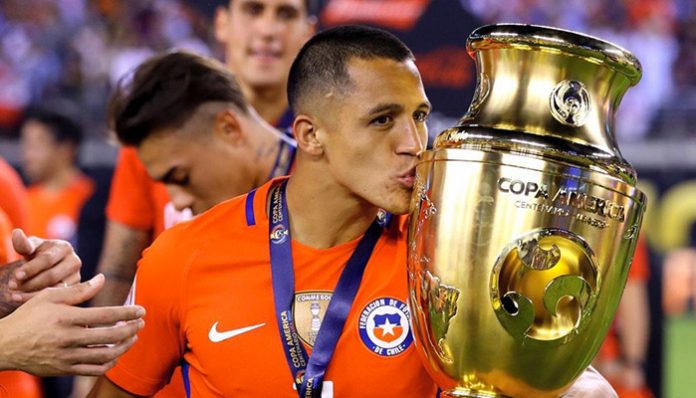 Alexis Sanchez is a happy man this morning as Chile won the Copa America last night in a penalty shoot-out with Argentina.

The Arsenal man took some punishment on the night. Having gone into the game with a knock he suffered in training he was given some rough treatment by the Argentinian defenders, and also went over on his ankle at one point.

It must have been bad because he had to come off in the first period of extra-time, meaning one of Chile’s main penalty takers wouldn’t be available if it came to that. Remember, Alexis scored the winner in last year’s final.

The game ended scoreless and after Lionel Messi missed his spot-kick, Chile went on to win 4-2 in the shoot-out. Afterwards the Barcelona man announced his international retirement while his former teammate looked on, then celebrated with trophies and medals.

Posting on his Instagram, he said, “I don’t have the words. I just want to thank my teammates and all the people who supported us. Now Chileans, enjoy!!”

Now, it’s time for him to get some proper rest. Let those aches and pains and niggles heal, and return to London to get a real pre-season under his belt before he’s back in action for us.

Congrats to Alexis and Chile

Alexis is a winner!!!. the good thing is that he will come back fresh and also with a winning mentality

Didn’t we say that last season though? He needs a longer rest than last season, give him a full month off before he starts pre-season training.

On the bright side, the final of the tournament was eight days earlier this summer than it was last.

I think he was quoted saying something like he doesn’t want to play for us anyway so I say screw him let’s get draxler and move Alexis to the right.

He’s probably of the opinion that we’re not going to win anything, hence wanting to go to Man U.

The fact that he’ll have to work for the world’s biggest cunt clearly isn’t a factor in his choice.

And sit out the Champion’s League.

He is shite. Plus none of the bundesliga players/supporters/experts ever watch BPL.

Seeing photos of Ronaldo showing off in his pants in the dressing room irritates the life out of me. When Alexis does it, I have no problem. He’s our man and he can do whatever the hell he wants.

I’m irrational and biased and proudly so. Isn’t that what being an football fan’s all about?

Eh I don’t quite think it’s the same thing. Ronaldo was the only person in a team photo without his clothes on. Also, he has a long history of being a huge cunt, which influenced how people interpreted that photo.

Alexis looks a lot like joey with that hair style

Happy for him, but next summer will be the 4th consecutive without break or with international tournament heading into the Fifa confed. Add 2018 World Cup. 5years in a row? Hmmm feel for Chile. But guess they are enjoying it and wish it so.

It would take a toll…

But don’t forget that Chile are the fittest team in world football!

The responsibility is on the clubs, to make sure the players are eased into the next season!

Congrats of course to Alexis. I do feel bad for Messi personally, and if he really is hanging up the boots for Argentina at 29 that would be both a shock and a disappointment. Sounds like the Argentinian FA really is a shambles right now. Saw on Twitter that several of their top stars are considering the same as Messi, no idea if it’s true but I don’t think you’re allowed to print lies on the Internet?

what this argentina team lacked was a proper leader, something that messi is not. despite what many say that the position of captain is merely ceremonial, but having someone else raising the morale of the team while he’s wondering about lost in his own world or just standing by listening during their last 3 tournament finals’ extra time team pep talk is just plain odd.

I agree, but mascherano is really the De facto captain (and ex-captain).

I personally hate seeing Messi and Ronaldo as captains

I wouldn’t even want Ozil, one of my favourite players, as a captain…

At least Mesut faced the stop of the GK… the Chilean GK had nothing to do in front of Messi to make him miss his shoot ! LOL
And the Messi’s comedy goes on with his announcement. He did it already once, just so that people say “OH NO, LEO, STAY!”… Pitiful…

Who we kidding, he’ll be playing 5v5 after a few days. Amazing stuff from him really

The good thing about this summer is he has two weeks extra rest than last year. The Copa finished a week earlier and the Premier League starts a week later. With 4 weeks off he should be returning for at least the last 2 games of pre-season. Whereas last year he didn’t get back until the week before the League started. This can only benefit Arsenal and him.

This may be a stupid question, but why are there 2 trophies?

AKB(Not the one your thinking of)
Reply to  Crash Fistfight

copa America and golden ball for best player of tourney

He was selected the best player of the tournament

Sanchez was named player of the tournament

Many congrats to dear Alexis~ Please go have a well deserved rest!

Hopefully his influence will rub off on the Arsenal players to have a winning mentality and strive hard for the title next season.

Missit Ozil and Xhaka in good company with Messi a Penalty and Vidal.

Arturo Vidal also missed his spot kick, sending a soft one into the keeper’s arms. So Messi, Vidal, Ozil, and Xhaka. And I almost forgot Ronaldo.

Messi is just being a prima Donna.. Did anyone from the FA select the team or miss chances during the game or miss a penalty? Or Play divey cheaty football…! The gamesmanship was appalling form both teams and unlike in Spain/Europe he was not treated as a God on the pitch by the ref. The man can retire all he wants; he’s behaving like its about him alone… What about the rest of the country that had to endure another heartache? The other players, what about them…
Talented but Silly little guy!

Messi is being childish;period.congrats to our own dear Alexis nd of course d victor laudorum Chile team!!!