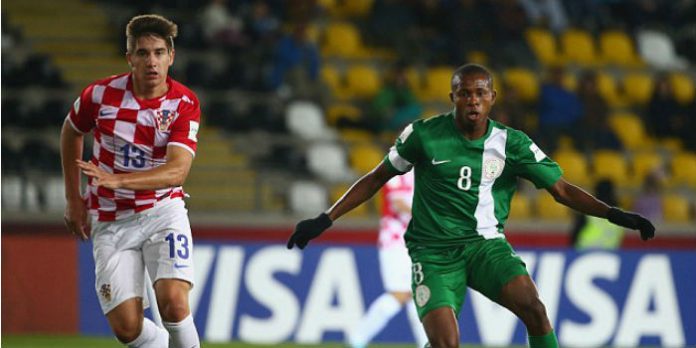 Nigerian teenager Samuel Chukwueze looks likely to miss out on a move to Arsenal, according to AfricanFootball.com.

Back in January Arsene Wenger acknowledged that the Gunners were in talks with the right winger but it appears negotiations have stalled since then.

It’s now thought the player, a star of his country’s victorious Under-17 World Cup side, could move to Porto.

Chukwueze’s compatriot Kelechi Nwakali has signed a contract with Arsenal but is yet to travel to London to join his new teammates. It’s believed Nwakali will do just that as soon as his summer international commitments are over.

“I just came back from London, I have signed a five-year contract with Arsenal, ” Nwakali told allnigeriasoccer.com in March.

“So many teams were interested in me but it has been my dream at a tender age to play for Arsenal.”

Shame, he looked promising. I wonder what happened, was he as old as Kanu?

A real shame. There were rumors he was the New Aliadiere.

…10years later
‘Wenger almost signed African player of the year chukwueze as a kid’
This is Arsenal!

We have already signed plenty of ‘starlets including a couple of Nigerians, one voted best player in recent tournament.

If not so what?

Wenger has been steadily improving the academy. He has successfully brought through Coquelin, Bellerin, Iwobi to first team with little transitional issues (not least to some extent Campbell)

We have to remember that as much promise as some of these players have (and trumped up by media), there is some ways to go to fulfill potential. Remember an Alban Bunjaku?

Very skillfull player in our academy some 5 seasons back. It got to his head (and his father’s) and he got impatient at Arsenal. Refuse to extend and left. NOt heard since, hasn’t even made the Albanian squad.

The first post of yours for roughly 6 months that hasn’t gone into an in depth analysis of the Arsenal first team squad and why Flamini isn’t the shittest footballer on the planet.

Are you OK, mate?

There is a pretty good reason he hasn’t made the Albanian national team, Alban Bunjaku plays for Kosovo.

He played for Sevilla reserves after he left us, then Derby County (didn’t actually manage a 1st team appearance though), and now Dordrecht (in the Dutch equivalent of the Championship).

He hasn’t hit the heights yet but he’s only 22 so still has a chance to develop. He could be the next Messi 😉 (Miracles CAN happen. I’ve read enough Roy of The Rovers stories to know that)

So out of character for Wenger. Vardy’s got maybe two more years playing at the top?

Still, a good signing, and hope we’re also looking at another attacking target. I’d say Walcott’s as good as gone this summer.

It makes sense that in a transfer window where we are likely to sell some home grown players, we need to buy home grown to meet the quota.

It’s very weird but it also makes sense in the most non Wenger way… 22 million release clause and only for teams in the CL. Liverpool and Utd can’t trigger it. Neither can City as they are not technically in CL yet. Spurs have Kane. Vardy probably wants its all sorted before his pre euro sex marathon. Welbeck is injured for the season so better than getting someone long term get a 29 year old capable of smashing them in so as not to ‘kill’ Welbeck. It’s uneasy but it’s there on a fucking platter…

But… but… but… he scores most of his goals from long balls. We can’t do long balls because we’re developing a team to press high up the pitch, so we will never, ever see any kind of space behind any opposition defence.

Mind you, if he did find space, and if he did actually reach the ball, then he’d need a Mahrez-type nippy bastard to pass to if the goalie looked like blocking his own shot (That’s how Leicester did it, after all). Maybe we can use Bellerin to be our Mahrez clone. He’s got the speed, AND a footballing brain twice the size of Walcott’s (though not a double-sized head, thank goodness, or air resistance would slow him down).

Or maybe we’re just trying to buy him so that Leicester won’t have him next season, or anybody else for that matter 🙂

Also, can’t imagine this will happen easily. I’d imagine Leicester aren’t keen on letting him go, and who knows what Vardy wants.

Not convinced by the news coming out to be honest, but you never know. Like him as a player but just doesn’t seem right for the players we should be going for this summer, and if we’re in Leicester I’d rather pop to check on Mahrez.
But, if true, I expect it’s down to Wenger failing to lure Aubameyang and wanting a simple solution (and no doubt keeping faith in Giroud as our prime striker).

Plus, fills the ‘brit quota’ should we be losing Walcott/Gibbs etc

And if true why the hell has he got a release clause, and why so low? Something doesn’t smell right at all about this ‘news’…

Gutbukket Deffrolla
Click to flag and open «Comment Reporting» form. You can choose reporting category and send message to website administrator. Admins may or may not choose to remove the comment or block the author. And please don't worry, your report will be anonymous.

We’re using interest in a prolific-last-season-striker as a stick to bash Wenger with? We must be really depressing people to be around.

It’s now on BBC as well – on the Poo Scale it would like a 3 maybe!

Vardy to Arsenal. I think I would be happy about this if it were true and totally stunned.

Don’t want Vardy. Doesn’t fit our style of play unless we’re going to change it just for him.

That’s true, he doesn’t fit our style of not scoring loads of chances.

He wouldn’t be a bad signing but he’s not the striker that will make a difference. He’s not even a very Wenger type player (whatever that is these days).
I’m going to hope this is some negotiation bravado as we angle in for our actual striker.

Also Jamie Vardy is a cunt it has to be said.

Yeah Ian Wright didn’t fit our style of play either. I mean he scored hardly any goals.

Was he the one that’s really good or the one bought to keep him company?

Jamie Vardy and Jack Wilshere are having a party

Anonymarse
Click to flag and open «Comment Reporting» form. You can choose reporting category and send message to website administrator. Admins may or may not choose to remove the comment or block the author. And please don't worry, your report will be anonymous.

News breaking that we’ve met Vardy’s release clause. Yep he is a chavvy twonk but I for one think he’s just what we need.
Just think of how many goals he’ll put away with our supply line! Has the Ian Wright non-league hunger.

Fucks sake. Vardy’s a one season wonder and hes 29. Please god no.

Gutbukket Deffrolla
Click to flag and open «Comment Reporting» form. You can choose reporting category and send message to website administrator. Admins may or may not choose to remove the comment or block the author. And please don't worry, your report will be anonymous.

But what if Chelsea buy him and he turns out to be a two-season wonder?

This is why samuel isn’t coming. He can’t even get a start in his own comments section.

Anonymarse
Click to flag and open «Comment Reporting» form. You can choose reporting category and send message to website administrator. Admins may or may not choose to remove the comment or block the author. And please don't worry, your report will be anonymous.

Vardy to Arsenal all over BBC and Sky now

Vardy is cheating, diving, racist scum and the thought of him in an Arsenal shirt makes me want to vomit. This has to be some kind of sick joke!

If we can teach him to bite we’re all set

Must admit Vardy would be a surprise.

Ghost of Henry
Click to flag and open «Comment Reporting» form. You can choose reporting category and send message to website administrator. Admins may or may not choose to remove the comment or block the author. And please don't worry, your report will be anonymous.

If he can score 20+ in the league with Leicester imagine with Ozil supplying would be a better bet for instant success that Morata.

Why has arseblog not reported on this (vardy) yet so I can see all our fans opinions on this!

Doesn’t seem to suit our style, but he is a finisher.

Just wait until Theo is 29. Then he will be awesome.

Does make me wonder if Vardy was shit prior to last season.