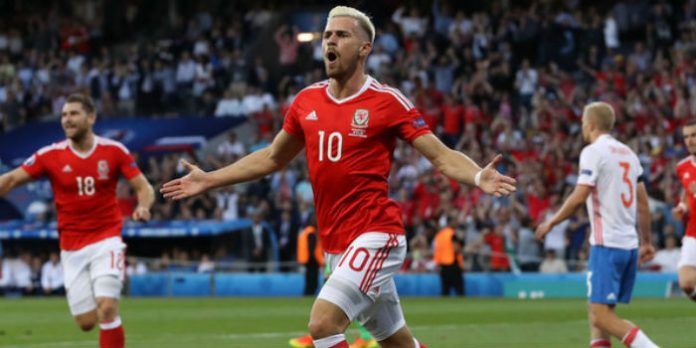 Wales and England both progressed to the knockout rounds of Euro 2016 finishing first and second respectively in Group B, here’s how the Arsenal representatives got on…

Aaron Ramsey produced a man of the match performance as he scored and grabbed an assist to help Wales put the disappointment of their late defeat to England behind them with a confident win over Russia. The Arsenal man broke the deadlock on 11 minutes, bursting through Russian defence to latch onto a Joe Allen through ball and clipping the ball over the onrushing keeper.

Neil Taylor doubled the Dragons’ lead on 20 minutes, finishing at the second time of asking, before Gareth Bale added a gloss to the scoreline in the second half courtesy of a fine Ramsey assist – his second of the competition.

Wales will now play in Paris on Saturday at 5pm against the highest-ranked third-placed team from one of groups A, C or D.

Jack Wilshere played 55 minutes as England laboured to a 0-0 draw against Slovakia. Roy Hodgson’s side dominated the game from the off but couldn’t muster a goal from their 29 attempts. It’s fair to say the Arsenal man, playing in the centre of the park next to Eric Dier, didn’t really influence the game (he completed 29/36 passes), however, it’s worth pointing out that England didn’t exactly get any better when Wayne Rooney replaced him.

The result means England will travel to Nice to play the runners-up in Group F on Monday night.

The Czech Republic face Turkey this evening without Tomas Rosicky who has been ruled out of the rest of the tournament with a thigh problem picked up in the draw with Croatia.

Speaking about the absence of his Arsenal teammate, Petr Cech remarked: “It’s a big loss, he’s one of the key players. The other players will have to step up, and the team will have to step up. We don’t have big stars. Our team spirit is usually the biggest strength. As a team, we will have to make up for the loss.”

Wilshere had a terrible game, was baffling to see some Arsenal fans on Twitter at half time saying he’d been England’s best player, no clue what game they were watching.

I agree, he lost the ball too many times trying to go through the middle. He did have a few long passes particularly the one to Vardy early on but sadly outshone of Henderson who was neater and tidier with possession. Henderson also did a great marking job too. Jack has not been his beat but is still capable of changing a game and the start should do him some good. Let’s hope he gets back to his old self next season. Also, Rambo showed what Vardy should have done with his chance; lifted rather than shot!

Ramsey now can teach Giggs how to play at international level

I wonder if blog would be so defensive of Jack if he were a Spurs player?
Trying to cover his poor performance and worst man of the pitch with “but but Rooney didn’t do much better” is really odd, particularly as this was meant to be an arsenal player watch, Rooney’s performance has no bearing on his. At best, they were both equally shit.

An Arsenal supporter SUPPORTING an Arsenal Player!? Imagine that…..

No. Sorry. It’ll never catch on.

Support doesn’t mean being biased or unable to be objective. That’s called being foolish mate.

I understand the point you mean in that bringing Rooney into it could appear to be smoke screening but I think the point blogs is trying to make is that while he played badly he was by no means on his own and a player like Rooney (captain/talisman/diving shitehawk) who has had a full season of football under his belt also did sweet f/a when he was brought in. I’m not going to hold him to ransom for defending an Arsenal lad who wasn’t obviously shite. Had he smashed in two own goals and diving headbutted someone i’d jump on… Read more »

Where Ramsey plays for Arsenal next year is a really big dilemma.
How do you fit Zhaka, Coq, Santi, Elneny, Ozil, Ramsey, and Wilshere into one midfield?
7 players for 3 positions? (Of course we don’t really count Wilshere, do we?)
No wonder Zelalem want to stay at Rangers.

I really don’t know why Wenger keeps buying midfielders, he should rather buy good wide players so he does not have to play midfielders out wide.

ohhh lord wont you buy me, some wide players.

Shooting the ball wide, is that what we call wide players? Perhaps we have one or two of those, lol.

Assuming no new transfers take place, Ramsey & Xhaka should be our first choice CM pairing with Ozil at No 10, Wilshere & Sanchez in the wide areas & Giroud up front. When Wilshere is injured / rested Ramsey can play wide with Cazorla in CM. Coquelin, Theo, Ox, Iwobi, Elneny & Welbeck (once fit) will to be used as squad players. Don’t see Campbell sticking around, especially when he can regularly start for half the PL sides.

Great to know someone sees things like me. Ramsey and Wilshere are too good not to be in our first 11, which means one of them must play wide.

Well depends on how you look at it; Wilshere always seems to get injured, Santi isn’t getting younger and Ramsey in the middle for us recently hasn’t been all that great and plus hes versatile enough to play out wide. That leaves us with Ozil who is not really a central midfielder. Xhaka and Coquelin who both play deeper as dms and Elneny who is more of an all rounder. So there are spaces in the squad. And remember last season we were struggling for midfielders as Arteta, Flamini, and Rosicky (who have all left) were all either injured or… Read more »

Ramsey’s best position is where he plays for Wales, which is in front of 2 defensive midfielders centrally with the licence to roam and do what he wants. He also plays in a team that sits very deep giving him lots of space, which means he doesn’t get in the way of this team mates like he does for us. He doesn’t fit into our style of play, where we more often than not we dominate the ball and play in a congested find third which requires quick passing, which isn’t Ramsey’s strength. Personally i hope he has a good… Read more »

Ramsey had his best game when Wales were attacking, not sitting deep. He is technically gifted and the errors come due to his self confidence. Just before the goal, he messed up a freekick. Moments later, he was calling for the pass and dinking the ball easily past the keeper.He knows what he can do. A bit of appreciation and patience from the fans is all he needs. People might have forgotten how the lad broke his leg, but he wont. He is an essential part of the Wales and Arsenal team. He used to play in the wales team… Read more »

2 players for each position? Madness!

Don’t worry-half those guys will be injured at any given point.

Wilshere doesn’t look match fit. Hopefully pre-season does him good and if possible he can have real run of games to unlock his potential.

Fitness did not look great, but problem seemed to be confidence. In that position has to be demanding ball, but looked to be hiding. Doesn’t help that he wasn’t given ball enough early on, but he has to really want it.

Wilshere’s positioning and passing vison were fine last night.
however his touch was dreadful. I’d like to put that down to rustyness but isnt it usually the former abilities that usually effects?

A Different George
Reply to  GoonerInk

Absolutely right; it was his touch, and perhaps his concentration, especially as the game wore on. Not really surprising–he has not played a full 90 minutes for a very long time.

We know that Wilshere didn’t have his best game yesterday.

And while taking him off for Rooney may have been understandable in the circumstances,
I don’t think it will do him or England any favours.

That’s because Wilshere is the kind of player who needs a run of games to (a) obtain some decent form, and (b) to regain that burst of speed that he uses to beat opponents over short distances.

Have to say I was really disappointed with Wilshire, having banged on to anyone who would listen about how he would be the one to unlock these stubborn defences we were playing he made me look a bit of an idiot. Normally despite lack of match sharpness you would at least expect some energy from him, even if everything doesn’t come off, im used to seeing him practically bouncing up an down on the pitch, head always moving, looking to burst away from players, but he never really made it out of a jog, seemed to be playing on the… Read more »

It probably had something to do with the fact that he was being trashed before he even made it to the first England training. Or the fact that the England coach made a big deal about taking him because he felt he was ready. Jack and his club coach thought he was ready, yet Mr Hodgson picked a portly converted striker ahead of him in the game that really counted then threw him a bone against Slovakia. No wonder he looked uninterested. Jack is easily the best midfielder in this England outfit. If this England team is going to do… Read more »

I’m not sure he looked disinterested. To me, I thought he looked nervous and unsure of what to do. He had a pretty horrible game all-round. To be fair, I don’t think he’s used to playing that role. England were playing a diamond midfield with him at the base prior to this season. Since Dier has come into the team the shape has changed – might’ve suited him more to play 4-2-3-1 with him in the middle of the 3. Or to play him ahead of the other 2 in the 4-3-3.

Wilshere was hot garbage, should never have got on the plane. This coming season should be his final chance at Arsenal as well. A shame about his injuries but he’s been a waste of wages for the last couple of seasons.

I peed a little when I heard that.

England have tidy players but are shite and will remain shite because Hodgson has no idea what his best team is. None at all. And neither does anyone else.

Wales will play a third place side from group A, C or D, not necessarily the highest-ranked one and it’s highly probable to be third place from either group A or D.

HA! That’s more than what Ramsey did for us the whole of last season.