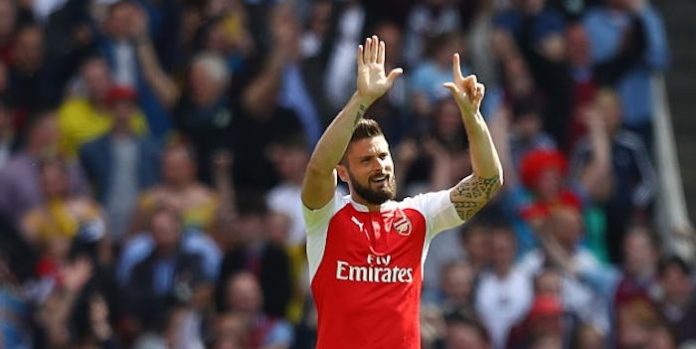 Olivier Giroud says he doesn’t know why he’s the target of jeers when he plays for France, but insists he’s unfazed by the treatment of his countrymen.

The striker scored his fifth goal in six games for Les Bleus as they overcame Cameroon 3-2 on Monday and will likely start up when Didier Deschamps side take on Romania in the opening game of EURO 2016 next Friday.

Speaking to L’Équipe – an interview headlined ‘The Unloved’ – the 29-year-old reflected on the whistles aimed in his direction both before and during France’s latest friendly win and the state of his domestic form during the last campaign.

“I don’t know why they did it. I asked myself the question and I don’t have too many answers. It doesn’t stop my from sleeping. And I managed to score, anyway.

“Am I paying for the absence of Benzema? I think so, you can’t close your eyes to it. I spoke with [Andre-Pierre] Gignac and we know we’ll be targeted.”

“I’m preparing myself to be ready for 10 June against Romania. Whether I start or not, my goal is to be ready. In the coming days I’ll get an idea of whether or not I’m playing. You’ll say I’m just talking in clichés, but it’s true [I don’t know yet if I’ll play].”

Giroud was also asked about whether he was worried about missing the cut for the tournament given his form suffered as Arsenal’s title challenge wavered.

“You can never be 100% sure,” he responded [translated by Sport Witness]. “But given what I had accomplished in team of France, I think so. Even at Arsenal if it didn’t work out at the start of the year, a team is not a player.

Giroud ended the season as Arsenal’s top scorer and maintains that while he couldn’t maintain his pre-Christmas strike-rate, he still put in important shifts.

“Our problems were collective. I’ve been less efficient compared to the first half of the season, but it is same for all the players, either Ozil or another.

“We mostly talk about the striker because he leads the line. I didn’t play well in some matches, it’s true, but I was also present in very important matches, against Leicester [at home] for example.

“In the Champions League, we qualified from the group stages thanks to my hat-trick against Olympiacos.”

Phew, glad the HFB gets his beauty sleep.

Can’t have any bags under those beautiful eyes <3

Waiting for that first training pic where Giroud and Granit are standing next to each other. I might weep with wonder.

“Our problems were collective. I’ve been less efficient compared to the first half of the season, but it is same for all the players, either Ozil or another.”

Özil created 144 chances this season. His assists went down due to Giroud inefficiency in front of goal amongst other things.

well, i’m not too sure, even though he says that, it would affect him, there’s no one who it wouldn’t and even him more so..the fact that he flapped his ear after given an assist against Sunderland it think betrays him And about arsenal problems being collective- partly true but a striker shouldn’t go 15 games without scoring whether that’s a fault of his or not and he mentioning ozil – to me feels he’s aware people are saying even with ozil he went on a crazy goal drought and i think that pix ozil like on instagram about him… Read more »

Lots of strikers have that type of ‘dry spell’ but he does seem to have them more often than most.

He’s used to being hated by other men. He knows it’s just pure jealousy.

Every girl at our local pub, my girlfriend included, loves them some OG. The boos are just coming from insecure dudes who can’t handle the fact that their girl thinks someone they like is hotter than them.

This is quite sad, if even your fellow country men cant stand you, then there is really no hope for poor Ollie!!!

Nah, the French are a fickle lot that way. They’ll love him again tomorrow.

Remind you of anyone

No need to worry ollie, it’s not personal. It wouldn’t be an international tournament if the French didn’t fall out with themselves

And he’ll again be targeted for the way he quoted it.. Poor guy puts an hell of a shift for everyteam he plays but his style is just an criticism magnet… I hope he scores a winner in a critical match

I’m French and i don’t get the boos against him. It’s all because of Benzema and the hateful campaign against Deschamps and all France from some…
But Olivier shouldn’t single out Mesut who was on top the whole season og going on creating and creating and creating… The problem was elsewhere…

I don’t think he was singling him out, it sounded to me more like just a quick example to say ‘even this guy found it tough for a bit’. But I agree there were more obvious examples, such as Alexis having a drought for some of that stretch too, and Ramsey and Walcott having droughts almost the full season.

I agree with Mpls, it was more of an argument along the lines of “well even the player of the season found it tough going at times during the season” which is a fair enough point. The best players are always much more consistent but never perfect; even our most consistent players such as Cech and Monreal had a couple of games to forget.

The French team and fans have really taken to shooting themselves in the foot in recent years. The fans have a right to boo Deschamps, but one can hardly blame Giroud for being the next best option in that position. Gignac is the next in line, for goodness’ sake!

I understand the point he is making but why name check a team mate. Is it to create a shield of protection to hide behind.

We know he is a sensitive soul so I do have sympathy for him. Maybe he should just keep his trap shut for a while and show it on the pitch.

A Different George
Reply to  Glasgow_Gooner

This is an example of why players are afraid to say anything that is not a pure cliche–any authentic statement, not drafted by the public relations expert and vetted by the lawyer, gets interpreted in ways the player did not expect.

There would be less controversy if Giroud had said, as I think he meant, “yes, my form dipped in the second half of the season, but so did the whole team’s–even Ozil, who is our best player and was excellent throughout, was not as good in the second half.”

Ross
Reply to  A Different George

Some intelligence on the internet

There’s a narrative among Ozil fan boys that Ozil keeps putting countless chances on the plate and Giroud spurns them. The truth is somewhere in between, Giroud is not as bad and Ozil not as good as some believe. Ozil’s form dropped off significantly in the last half of the season.

Relative to transfer fees, Giroud has been a better performer for Arsenal than Ozil has been. I still think we should upgrade, don’t get me wrong. But some of the vitriol is undeserved.

He sleeps perfectly fine… in my arms… in my dreams… where i am the little spoon.

Don’t get why he’s mentioning Ozil?? Statistically ozil chance created per game didn’t fall off as dramatically as Giroud goal scoring did.
He can’t seem to take the pressure of being first choice in a big club. This is why we need another world class striker…so we don’t hear this excuse of him being tired every season.

I know the instagram-like-thing, but that’s really just a like, lots of viewers thought that’s a joke, in an interview, you don’t just throw your teammates under the bus.

Not countless chances. Quite the opposite in fact, when you consider stats are made available by counting a particular action over the course of a match / season.

I think you will find there were quite a lot of chances created but not as many goals scored.

Ozil fan boys made me laugh. Nothing wrong with being a fan of a truly world class player.

Do you think he is overrated?

What is this some Giroud support column? Spuds hoping he will bluntly spearhead our attack once more? Giroud is good enough for a Southampton or Everton, but miles from good enough for us and never was. World class required. It was required last summer and Wenger stubbornly refused and stubbornly left Giroud in there to do nothing in 15 games. He’d come on and stroll around a bit and make sure he didn’t damage his hair. Pathetic. Giroud out, Wenger out!